(RNS) In the weeks after Khizr Khan’s speech to the Democratic National Convention, bouquets of flowers and personal condolence letters have steadily accumulated at the grave of his son, Capt. Humayun Khan, as visitors — mostly strangers — have stopped to honor the officer, who died in 2004 protecting his troops.

The tributes came amid GOP presidential candidate Donald Trump’s calls for a temporary ban on Muslims from entering the country, and more recently his proposed “ideological test” to determine if Muslim immigrants to the U.S. support what he refers to as “American values.”

David Washburn, a filmmaker who has produced documentaries on Muslim subjects, has found that Muslims in the armed forces face a double standard: They are asked to risk their lives on behalf of a country whose political candidates talk about limiting their civil rights. Some also face criticism from their own communities for fighting controversial battles in countries that are mostly Muslim. They don’t hear “thank you for your service” as routinely as non-Muslim military do, Washburn said.

Here are four military veterans who shared their experiences as Muslims serving in the armed forces:

A U.S. Army veteran from Boston, Lt. Col. Shareda Hosein faced challenges, both within the military and in the Muslim community.

She had to accept that the headscarf, which she normally wears, is not permitted as part of the military uniform. In addition, she at times felt uncomfortable wearing her uniform in the Muslim community, as not all Muslims support the U.S. fighting in Muslim-majority countries. Concerned that other Muslims might view her critically, she once wore a jilbab — a traditional loose garment — over her uniform when she visited a mosque on her way to Reserve duty.

“If I don’t self-identify as a Muslim I’ll be treated one way,” she said.  “And if I do self-identify there are some people who were not comfortable with me.” 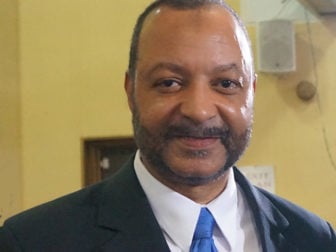 “I changed my name, changed my thinking, became a follower of the honorable Imam Warith Deen Mohammed and was always on the path of patriotism and Islam,” he said. “W.D. Mohammed picked up the American flag and said, ‘If you don’t pick up this flag I’ll carry it myself.’”

During basic training, he was reprimanded for possessing religious literature. But otherwise he said he had a positive experience with his colleagues.

In the 1990s he became part of the team that founded the Muslim American Veterans Association, an organization inspired by Mohammed’s teachings. Col. Doug Burpee spent nearly 30 years in the Marines and retired in 2012.

He converted to Islam while in college after studying the religion of the Muslim woman who was to become his wife.

For him, military service requires cohesive teamwork focused on doing the job. That means being a Marine takes precedence over being Muslim, and while that may include some fraternity-type joking, he says it doesn’t interfere with his faith.

“When you join an organization like the military it’s a little bit like being on a football team,” he said. “You have to take some razzing. You become part of the pluralism of the organization, which is made up of all kinds of persons from all walks of life. It’s OK that you’re a Muslim; you fit in.”

Burpee believes insistence on some religious accommodations inhibits the sense of teamwork and bonding that military success requires. Some practices, he feels, can be done privately.

“People care what your religion is when you become an isolationist,” he said. “If the guys go drinking you go drinking with them. You just don’t drink.”

He thinks the story of Capt. Khan and the controversy that followed Khizr Khan’s speech at the Democratic National Convention has allowed Muslims to stand in the forefront.

He finds that Capt. Khan’s story represents a spirit of American patriotism reflected in today’s diversity.

“We are Americans. I’m an American,” he says. “I just happen to be Muslim. There is pluralism here.” Sgt. Tariq Yunis, a former Green Beret, served from 2001-2010. He was assigned to Fort Campbell, Ky., a base he describes as “pretty accommodating,” noting that there is a chapel for Muslim services.

He says treatment of Muslims in the military varies.

“I got in trouble for praying for a soldier who was killed,” he said. “I was formally reprimanded. That’s unfortunate but as far as practicing later on in my career and also at the macro level I really have had no problems.”

But he feels the U.S. armed forces do their best to stop anti-Muslim discrimination.

“As far as personal attacks against Muslims in the military, the military is a very professional organization.”

(Ruth Nasrullah is a correspondent based in Houston)