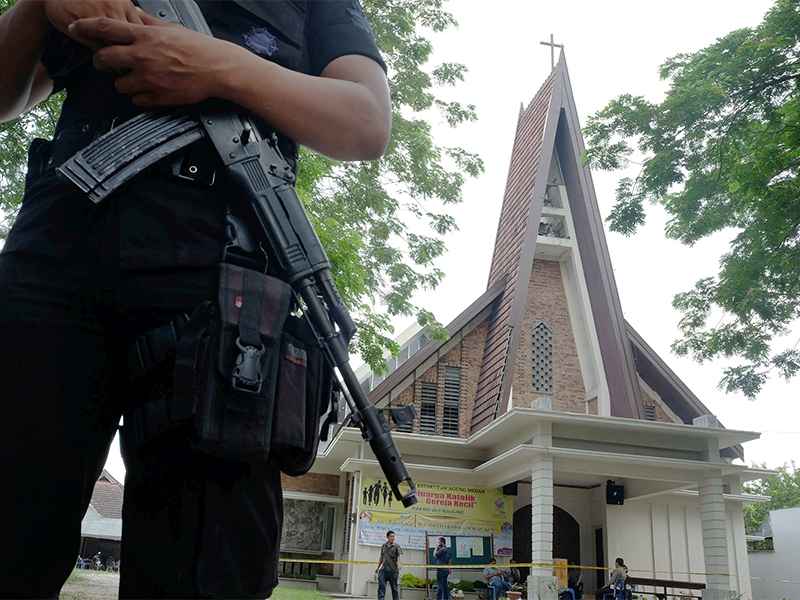 Police are seen outside Saint Joseph's Catholic Church after a suspected terror attack by a knife-wielding assailant on a priest during Sunday service in Medan, North Sumatra, Indonesia, on August 28, 2016. Photo courtesy of Antara Foto/Irsan Mulyadi/ via REUTERS.
August 31, 2016
Tom Heneghan

JAKARTA (Reuters) An Indonesian teenager who attacked a Catholic priest in his church was inspired by the murder of a French priest in July and guided by a radical compatriot in the so-called Islamic State, Jakarta's national police chief said.

But the youth's bomb-making skills, acquired over the internet, were amateurish and his suicide bomb belt failed to explode, Gen. Tito Karnavian told foreign journalists Wednesday (Aug. 31). Parishioners overpowered the 17-year-old when he assaulted the priest with a knife on Sunday, and he is now in police custody.

Karnavian said the unsuccessful attack showed the phenomenon of a "lone wolf" radicalized over the internet was spreading in the world's largest Muslim-majority nation, projecting the violence of the Islamic State as far afield as Indonesia, where Muslims and Christians have mostly lived in harmony.

The attacker took his inspiration from reports of the murder of the Rev. Jacques Hamel, 85, who died after two militants slit his throat during Mass in a suburb of Rouen in northern France in July. The murder was the latest in a grim series of radical Islamist killings that have rocked France in recent years.

"He was imitating ... the priest attack because of the internet," Karnavian said.

"Based on communications, we found he also had a connection with an Indonesian in Syria," he added, explaining the compatriot was a radical based in Raqqa. "It is an indication that the lone wolf (phenomenon) is growing in Indonesia."

There were no serious casualties in Sunday's attack in the northern city of Medan, though the priest and the attacker -- identified as Ivan Armadi -- suffered minor injuries, according to police.

Hamel's murder was the first Islamist attack on a church in Western Europe and came just 12 days after a Tunisian who had pledged allegiance to the Islamic State drove his truck through a crowd of Bastille Day revelers in the Riviera city of Nice, killing 85.

Indonesian Chief Security Minister Wiranto said on Monday that Armadi had a note in his backpack saying "I love al-Baghdadi," referring to the head of the Islamic State group.

"From the cellphone that was seized by security forces, this youth was obsessed with Abu Bakr al-Baghdadi," said Wiranto, who goes by one name.

Karnavian said police had found no indication Armadi had any contacts to Islamist networks in Indonesia, so his attack was considered a case of self-radicalization and not sectarian violence rooted in tensions between religious communities in traditionally tolerant Indonesia.

Indonesia has the world's largest Muslim population and the vast majority practice a moderate form of Islam. But a small minority of militant Islamists has been growing in recent years, inspired in part by Islamist militant groups such as al-Qaida and the Islamic State.

Religious Affairs Minister Lukman Hakim Saifuddin was more cautious than Karnavian when asked about the Medan attack, saying "conflicts related to religion are not based on religion."

He said religions preach peace, so violent radicals claiming to act in the name of Islam were really exploiting the faith to promote their own political goals related to social or economic injustice.

The government is drawing up a draft law to limit hate speech on social media that would limit extreme statements by all religious communities, he said.

"This is the challenge that must be faced."

Saifuddin and Karnavian spoke in briefings to foreign journalists on a study tour sponsored by the Hawaii-based East-West Center, a nonprofit organization financed in part by the U.S. government.

Karnavian said that Armadi had said two men paid him to stage the attack at St. Joseph's Church in Medan, but police doubted his story and thought it was meant to lessen his blame in the operation.

"We strongly believe this was not sectarianism, because he was a lone wolf," he said, adding that many Muslims in the Medan area had condemned the attack.

Indonesian counterterrorism officials have said there are hundreds of Islamic State sympathizers in the country.

Indonesia suffered its first Islamic State-linked attack in January, when four people died in a gun and bomb assault in the capital, Jakarta.

Related Posts
By Kathryn Post
Protester, Oluwatoyin Salau, found dead after tweeting assaulter was 'disguised as a man of God'
By Ahmad Pathoni
Indonesian Muslims brace for somber Ramadan amid pandemic restrictions
By Samy Magdy, Lee Keath
Muslims try to keep Ramadan spirit amid virus restrictions
By C. Christopher Smith
COVID-19 could end church as we know it. And I feel fine.
By Claire Giangravé
Did an Italian priest really give up his respirator for a younger patient?