INDIANAPOLIS (USA Today) An Indiana mother who beat her 7-year-old son with a coat hanger is citing the state's religious freedom law as a defense against felony child abuse charges, saying her choice of discipline comes straight from her evangelical Christian beliefs.

The Indianapolis woman quoted biblical Scripture in court documents. She said that a parent who "spares the rod, spoils the child," and: "Do not withhold discipline from a child; if you strike him with a rod, he will not die. If you strike him with the rod, you will save his soul from Sheol."

The Religious Freedom Restoration Act, enacted in 2015, says the government cannot intrude on a person's religious liberty unless it can prove a compelling interest in imposing that burden, and can do so in the least restrictive way. 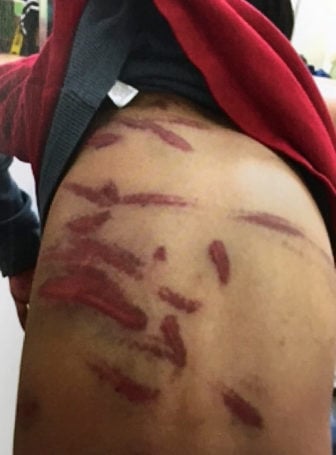 Some of the wounds suffered by the 7-year-old boy. Image is evidence filed in Marion (Ind.) Superior Court via The Indianapolis Star

The woman, a Burmese refugee granted political asylum in the U.S., also is pointing to cultural differences as part of her defense. The case is complicated by an Indiana Supreme Court decision, one law expert said, that gives parents the right to use cords and belts — and possibly even coat hangers — to punish their children.

The alleged abuse occurred Feb. 3, according to court documents, when 30-year-old Kin Park Thaing said she stopped her son from dangerous behavior that would have seriously harmed his 3-year-old sister. Thaing, documents say, hit both children with a plastic coat hanger before telling them to pray for forgiveness.

"I was worried for my son's salvation with God after he dies," said Thaing, who attends a southside church, according to court documents. "I decided to punish my son to prevent him from hurting my daughter and to help him learn how to behave as God would want him to."

Two days later, a teacher patted the boy on the back and saw him flinch, according to court records. The teacher saw red welts on the boy and reported the observations to police and child welfare officials.

A doctor at Riley Hospital for Children at Indiana University Health found 36 bruises across the boy's back, thigh and left arm. Three photographs submitted to the court show deep purple lines striping the boy's back and several welts on his arm. The boy has one curved bruise on his cheek in the shape of a hook on a coat hanger.

Thaing was arrested in February on felony abuse and neglect charges. 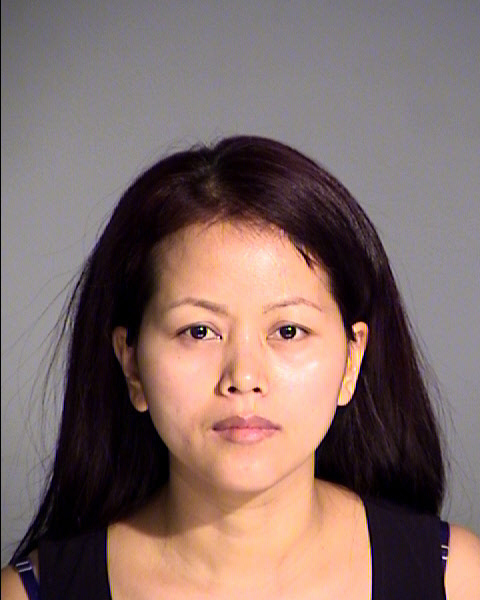 Kin Park Thaing is suspected of beating her son with a plastic coat hanger. Photo courtesy of Metropolitan Police Department in Indianapolis, via The Indianapolis Star

Thaing and her lawyer, Greg Bowes, declined to be interviewed. In a six-page memorandum filed July 29, Bowes argued that the Religious Freedom Restoration Act gives Thaing the right to discipline her children in accordance with her beliefs and that the state should not interfere with her fundamental right to raise her children as she deems appropriate.

Marion County Deputy Prosecutor Matt Savage also declined to be interviewed. In an eight-page rebuttal filed Aug. 5, Savage argued that the beating "(goes) beyond these religious instructions she cites from the Bible."

Thaing may use "reasonable corporal punishment," Savage wrote, but the physical punishment she administered was beyond what most people consider reasonable. Indiana's compelling interest in preventing child abuse outweighs the religious freedom protections, Savage wrote.

"When perpetrators of violence against children are prosecuted and ultimately punished," Savage wrote, "the government protects ... the community in general."

Cultural differences probably contributed to Thaing's failure to understand the law, according to an expert on Burmese refugees in Indianapolis.

Elaisa Vahnie, executive director of the Burmese American Community Institute, expressed regret for the injuries suffered by Thaing's son while noting that what might be seen as a crime in Indiana may be considered typical parenting in Burma, which is now known as Myanmar.

For the most part, it's legal for parents to spank children in accordance with their religious beliefs, Vahnie said. Authorities, he said, probably wouldn't get involved unless the beating left a child with very serious injuries.

After moving, Burmese families need time to learn the laws and customs of their new home, Vahnie said.

"It's a great challenge," Vahnie said. "They come here sometimes with little or no English. They need to start from scratch. It's a completely different environment."

Thaing required an interpreter when speaking to police and in court, according to court documents. It's unclear how long Thaing has lived here.

Vahnie said he hopes the court system will take the cultural barrier into account as the case progresses.

Thaing's attorney cited cultural differences in her defense. Thaing is willing to adapt, defense lawyer Bowes told the court, noting she completed a parenting class as part of a civil case connected to the alleged abuse that's been dismissed.

Thaing's children were taken by child welfare officials in February, but it's unknown where they are now. Attorneys declined to comment.

"I now know that there are effective ways to teach my children good behavior without using physical punishment," Thaing said in her affidavit.

The religious freedom claim is half of a one-two defense offered by Thaing's lawyer. The other half leans on a 2008 Indiana Supreme Court decision that affirmed the parental right to discipline children in ways parents consider appropriate, even when others could deem that behavior as excessive.

In 2008, the Indiana Supreme Court ruled 3-1 to overturn the felony conviction of Sophia Willis, who used a belt or an electrical cord to discipline her 11-year-old son. (The mom said belt, the son said cord; the court ruled it did not matter.)

The justices in that decision gave parents wide latitude in determining what is reasonable discipline for their children. Hitting kids with a belt or an electrical cord is not much different from using a coat hanger, said Jennifer Drobac, professor at the Indiana University Robert H. McKinney School of Law, who has taught the Willis decision in classes on juvenile law.

Thaing is charged with battery as a level 5 felony and neglect as a level 6 felony. Battery carries a prison sentence of one to 10 years; neglect carries a sentence of six months to 2½ years.