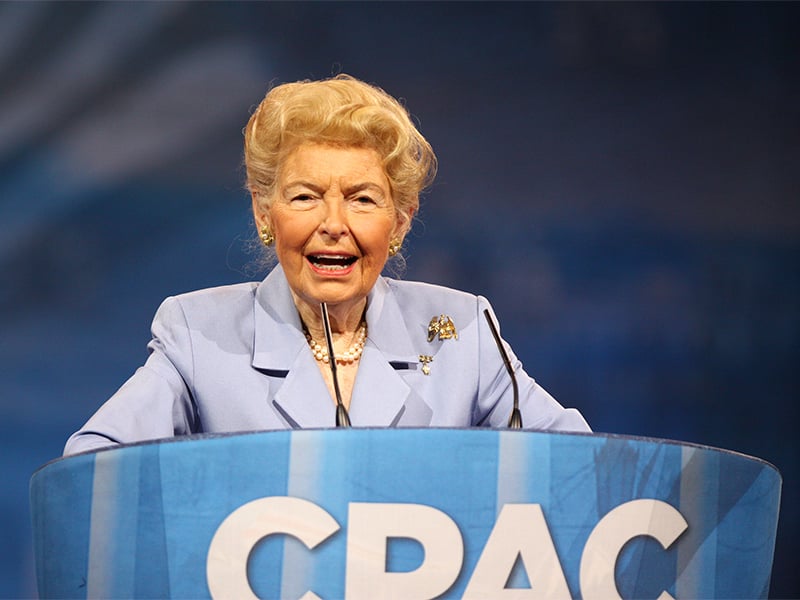 (RNS) Anti-feminist and conservative political activist Phyllis Schlafly was a favorite of the religious right. The founder of the Eagle Forum, who died Monday (Sept. 6), campaigned hard against the Equal Rights Amendment and abortion rights, endearing herself to both political and religious conservatives. Here are some of their -- and others' -- thoughts on her passing.

As a tribute to the late, great Phyllis Schlafly, I hope everybody can go out and get her latest book, THE CONSERVATIVE CASE FOR TRUMP.

Today, the pro-life movement lost a hero, Phyllis Schlafly. Mrs. Schlafly not only helped the Republican Party become pro-life in the 1980s, but spent the remainder of her life ensuring it remained so. I was honored to be trained to work on the platform under Phyllis's wing and was able to witness, first-hand, how she fought to maintain its pro-life status. It is fitting that the current platform has the strongest pro-life policies ever. We are a better nation thanks to the work of Phyllis Schlafly - she was a role model for conservatives of all ages and stripes. We are praying for her family.

She Went Down Swinging! - Phyllis Schlafly.

May she rest in peace.

Phyllis Schlafly was one of the giants of the American conservative movement. She battled, she won, she confounded the radical left wing feminists time and again. Frankly, she was smarter and tougher than the liberals she fought and conquered so joyously. The defeat of the so called Equal Rights Amendment stands as but one of many monuments to her legacy. Still, she was always refined, always charming. Ronald Reagan liked her and said so in his diaries.

Thank you, Phyllis Schlafly, for your grace, strength, courage and impact. Always classy. Never shirked from a fight. God bless you.

Phyllis Schlafly was a courageous defender of liberty for all Americans especially those who have no voice. Alongside Concerned Women for America, her heart’s desire was to defend each member of the American family, from conception to natural death. We are grateful for her influence in America politics, her fight against Communist dictators and her education of grassroots women on the importance of constitutional and free market principles. There will never be another Phyllis Schlafly. She possessed and exceptional intellect and a kind heart. She will be greatly missed.

Phyllis Schlafly represented a kind of reactionary form of Catholicism that we hope someday the Church will move beyond.

Phyllis Schlafly's legacy will be one of trying to inflict as much damage as possible on millions of women, immigrants, the LGBTQ community, people of color and families over decades. She was against some the fundamental pillars of freedom, justice and equality  — from feminism to abortion to marriage equality. Her political legacy and views will not stand the test of time for what is good, kind and decent.

Related Posts
By Adelle M. Banks
Religious leaders decry, question death of Ahmaud Arbery after video surfaces
By Adelle M. Banks
Black clergy memorialize the dead, ask government to address disparities
By Alejandra Molina
In California, residents may be able to compost their bodies after death
By Yonat Shimron
J. Dana Trent is on a mission to discuss death with the post-Millennial generation
By Yonat Shimron
Jonathan Wilson-Hartgrove wants white evangelicals to reckon with the Bible