If you’re looking for a loving, matter-of-fact way to teach children about our Heavenly Parents, Deseret Book has a new picture book for you from the authors of the “Girls Who Choose God” books. McArthur Krishna and Bethany Brady Spalding, the co-authors, joined with illustrator Caitlin Connolly to create Our Heavenly Family, Our Earthly Families, which was released last week.

It’s exciting (and about time) that the LDS Church’s official publishing arm is releasing a book that talks openly and unapologetically about Heavenly Mother as a deity who loves, leads, and guides us.

It’s also exciting (and long, long past time) to have such a book show earthly fathers and mothers as equal partners in raising their children without falling into gender stereotypes.

McArthur spoke to me by phone from her home in India. — JKR

RNS: It’s great to see Heavenly Mother being addressed clearly, instead of as some kind of shrinking wallflower who is so fragile we can’t even speak her name.

McArthur Krishna: We all know that we have Heavenly Mother. There’s no reason not to talk about this, and to celebrate what we know. I personally think this is really important because, living in India, you clearly see the challenges a society faces when there’s a lot of anti-female bigotry. Don’t get me wrong; this is present in America too, but it’s in India in a more robust and obvious way. So I think that talking about a Heavenly Mother leaves zero room for bigotry against women.

Bethany and I were very careful that everything we say about Heavenly Mother would be absolutely backed up by statements by general authorities and prophets when they were speaking in an official capacity. There’s a place for exploration and curiosity of course, sure, but this children’s book is not that place. So there’s an essay that was written by Dr. David Paulsen about all of the things people have said about Heavenly Mother.

What was exciting to us was that maybe a year after we had turned in our manuscript for the book, the church published an essay on Heavenly Mother on their website. And in that essay they say it is our “cherished doctrine” that we have Heavenly Mother.

RNS: But the idea that she’s powerful and active is not what we’ve always heard in church, is it? For too long we’ve heard too little, and been given the impression that Heavenly Mother is so weak and delicate we shouldn’t even say her name for fear of defiling it.

Krishna: So the BYU professor, Dr. Paulsen, who did this historical review of Heavenly Mother, found more than 600 times that Heavenly Mother was mentioned in LDS history. Not once in all that time did a general authority ever say that we cannot speak of her because of her supposedly fragile nature. She is a goddess in might and dignity. And to consider her otherwise, I think, is disrespectful to Her.

RNS: What were you most wanting to communicate about our Heavenly Parents?

Krishna: For me, I think it is a doctrine that is so vital to understand that we have parents who love us, since not everyone was blessed with that on earth. All of us have days where we come up short, so to have heavenly parents who love us unconditionally, no matter what, it’s a real balm to your soul. RNS: I know your book just came out, but what has been the feedback so far from traditional Mormons?

Krishna: This has been a little bit of a surprise to us. We actually have seen that what I would label mainstream Mormonism has been incredibly receptive and celebratory, and one of the ways we know that is that it’s already #4 on the Deseret Book best-seller list.

RNS: I’m quite taken with the illustrations. Is this the same artist you used for your first two books?

Krishna: No, this is not the same person, as much as we loved the illustrations for those books. For this, we needed to do something different stylistically, so we looked around for a Mormon artist whose style would be modern and clean and powerful. We found Caitlin and her style was just lovely. The cover does a beautiful job of showing that the whole gulf of humanity is under the Heavenly Parents’ care. There’s such a richness and warmth to it. 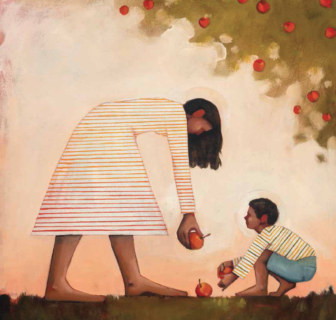 “Families Help Each Other,” by Caitlin Connolly

RNS: The book goes out of its way to celebrate many different kinds of family configurations, and to praise family life as a school where we get to learn things like how to forgive each other and work together. Thanks for being sensitive to different family situations.

Krishna: I didn’t get married until I was 37, and Bethany was also in her 30s. We didn’t want a single person to look at this and say, “Oh, great. Another book on families.” We wanted to make sure that it wasn’t about the structure of the family, but the potential and the growth and the love. We’re not doing another “Let’s all look the same!” book. Family’s what you got, and what you choose to create. Family is your best intentions combined with the perfect love of your heavenly parents: that gives you a strong foundation to build.

My husband is not a member of our faith, and spirituality is a tricky ground in our house. And my family doesn’t look anything like I would have expected it to look. The days when I’m the most sane are the days when I’m OK with that.

RNS: Finally, what’s it like to be a Mormon in India?

Krishna: I live an overnight train ride from my congregation. My visiting teaching route stretches the equivalent of the land mass from Denver to Washington, D.C.! It’s tricky. Life is both messier and more grand than I ever imagined. We have to be careful that we don’t put limitations on what our Heavenly Parents offer us.