(RNS) This week, Pew released the results of its 2016 study of political party identification, including breakdowns of both parties by gender, age, race, and religion.

For Mormons, the news is particularly interesting because it comes in an election cycle when the “Mormon vote” has been a hurdle for Donald Trump, the Republican candidate for president.

Trump’s inability to capture the vote of members of the Church of Jesus Christ of Latter-day Saints seems reflected in the Pew numbers: In 2012, 78 percent of Mormons said they were Republican or “leaned” Republican, compared to just 69 percent this year. 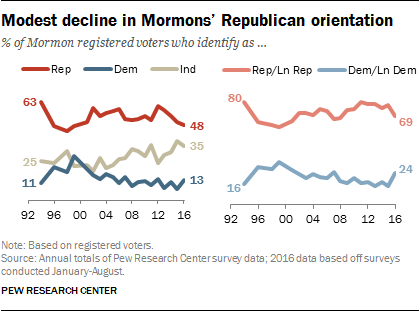 That means Mormons aren’t America’s most Republican religious group, as they were in Pew’s 2014 Religious Landscape survey. Today, that honor belongs to white evangelicals, who favor the GOP at a whopping 76 percent.

In fact, late last year the church, which does not officially endorse political candidates or tell Latter-day Saints how to vote, issued a statement emphasizing the value of religious freedom — which is not consistent with Trump’s stated plan to ban all Muslims from entering the United States. The timing of the announcement was not lost on the church-owned Deseret News, whose headline read, “LDS Church releases statement on religious freedom while Donald Trump’s Muslim controversy swirls.”

But to focus solely on Trump as the reason for the Mormon shift vis-a-vis the GOP is a bit short-sighted, for a couple of reasons.

First, and most significant, the 2011-2012 election season was an outlier in LDS affiliation with the GOP. In 2011, fully 80 percent of Mormons said they were Republican or leaned Republican; in 2012, as we’ve seen, it was 78 percent. Those numbers are sky-high — not just compared to this year’s, but to almost any other year’s. 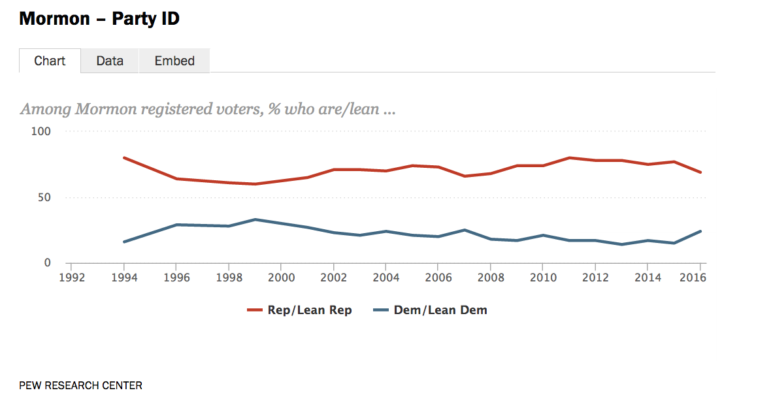 The 80 percent rate is the highest it’s been since 1994, when Mormons, like many others in America, were swept up in the tide of the GOP’s Contract with America. Most of the time, the Mormon-GOP love affair has been around 60 or 70 percent. So what we’re seeing now may simply be a return to historic norms after the excitement Mormons felt in 2012 when their own native son — Mitt Romney — was in the running.

Another nuance I think is important is that the Mormon move away from the GOP reflects a wider trend: Mormons, as a people, are a little more likely to have a college degree than the national average. And people with a college degree, Pew finds, are more likely to affiliate as Democrats (53 percent) than as Republicans (41 percent).

Also, Mormons are a relatively young faith in terms of the age of its adherents. Among millennial voters in the general electorate, only 36 percent say they are Republican or “lean” Republican, compared with 57 percent who skew Democratic. The numbers are a little more Republican-friendly among Gen-Xers, but not by a whole lot. So since Mormonism has a youthful base, some partisan shifting makes sense.

So I would point out that the Mormon trends are in keeping with some of the larger changes in party affiliation in America. Along these lines, here’s what Benjamin Knoll, an associate professor of politics at Centre College, says about this week’s Pew numbers:

However, he has this caveat:

The more interesting story to me is the trend you can observe when partisans are combined with partisan “leaners” – those who say that they are “Independent” but then also say they lean toward one party or another. Leaners tend to think and vote in many ways similar to their partisan counterparts. And when you look at partisanship among Mormons when leaners are included, we see a slow but steady rise in Republican identification over the last decade. This again makes sense in terms of national trends where highly religious people are sorting more and more into the Republican Party and less religious secular folks are sorting more and more into the Democratic Party.

It remains to be seen whether this slight drop in Republican identification in 2016 is part of a new ongoing trend or whether it’s a temporary “blip” due at least partially to the “Trump Effect.”