ASSISI, Italy (RNS) Down a deserted stone alleyway, a joyful chorus of “Hallelujah” can be heard rising from an open window while dozens of tourists armed with selfie sticks gather nearby and begin to scour one of Italy’s most beloved towns in search of the perfect digital souvenir.

Assisi, a charming medieval hillside city site 100 miles northwest of Rome, is the birthplace of St. Francis, the friar who revolutionized the Catholic Church by preaching a message of poverty and humility more than 800 years ago.

The saint himself has long been an object of near universal appeal: Statues of St. Francis adorn gardens in the U.S. and around the world, and the famous Francis "peace prayer" -- though not written by him -- is immediately recognizable.

And of course the famous stories of Francis' rapport with and respect for all creation, even bugs and wolves, have made him the patron saint of environmentalism as well as service to the poor. 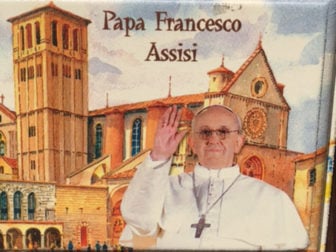 The image of Pope Francis is depicted on key chains, calendars and plaques in souvenir stores in Assisi. RNS photo by Josephine McKenna

Those are all reasons that after his 2013 election as pope, Argentine Cardinal Jorge Mario Bergoglio became the first pontiff in history to choose Francis as his papal name.

But more than a name, Francis has also made Assisi a regular destination: On Tuesday (Sept. 20), he will visit the Umbrian town for the third time to participate in the 30th interreligious World Day of Prayer for Peace.

His first visit was for the saint's feast day in October 2013, and then he came just last month.

Francis' predecessor, Pope Emeritus Benedict XVI, who sometimes had a rocky relationship with the Franciscans in charge of the town's holy sites, visited twice during his eight-year papacy.

But having Francis visit three times now in less than four years has really cemented his affinity with Assisi, which was already a popular pilgrimage site. That has clearly thrilled the people who live and work there. 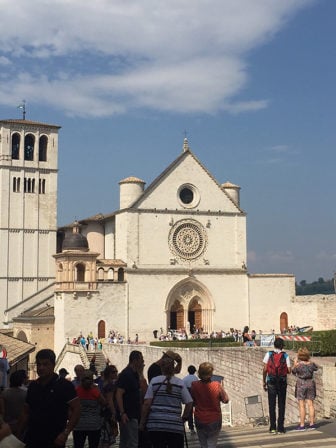 The Basilica of St. Francis of Assisi, built in the 13th century, houses the tomb of the saint and is a UNESCO World Heritage site. Assisi, a charming medieval hillside city site 100 miles northwest of Rome, is the birthplace of St. Francis, the friar who revolutionized the Catholic Church by preaching a message of poverty and humility more than 800 years ago. RNS photo by Josephine McKenna

“The pope is fantastic,” said one local shopkeeper. “He is charismatic. I feel very emotional whenever he speaks.”

“I think Pope Francis is particularly close to our saint because his agenda for the church is to be close to the poor and that comes from this historical source,” said Bishop Domenico Sorrentino, who has headed the Assisi Diocese for the past 10 years.

“For a pope who called himself Francis it is like coming home. We are very, very happy.”

Such enthusiasm is a distinct contrast to the disappointment of many in the town of Castel Gandolfo just outside of Rome that for centuries had been the favored summer palace for the popes -- and hence a tourist attraction.

But Francis does not like downtime or the idea of a summer retreat, so Castel Gandolfo's fortunes have flagged with his absence.

Perched on the slopes of Mount Subasio, Assisi has sweeping views across a breathtaking valley where farmers still toil in the fields and visitors can imagine Francis strolling with his followers as he preached a message of peace and compassion.

That message is so identified with the place that this weekend over 400 delegates from the world’s major religions, including Judaism, Christianity, Islam, Buddhism, Hinduism and Sikhism, will gather in Assisi to pray and call for peace.

The ecumenical patriarch of Constantinople, Bartholomew I, a close friend of the pope, will be among the religious leaders, and the Italian president, Sergio Mattarella, will also attend the final day's event with Francis.

Beside the stunning basilica that bears St. Francis' name, preparations are well underway and workers are constructing a huge stage for the event organized by the Franciscan Families, the Diocese of Assisi and the Community of Sant’ Egidio, a Rome-based ministry that works for social justice. 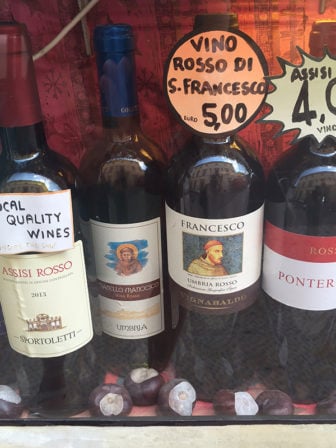 Images of St. Francis appear on wines from the local region of Umbria surrounding Assisi. RNS photo by Josephine McKenna

The Rev. Enzo Fortunato, a Franciscan who is the event’s co-organizer, heads the press office for the papal basilica and convent of Assisi. He said the Franciscans were thrilled when the pope agreed to return to Assisi so soon after his most recent visit, in August.

“His choice confirms that Assisi can become a platform – a spiritual beacon – because everyone accepts that Assisi is for all faiths, all cultures,” he told Religion News Service. “They find a place that disarms the hearts of those who come here. It is possible to have dialogue and put a common objective into action.”

Fortunato also recalled the first visit Francis made, in 2013, and how moved the pope was when he prayed at the tomb of his namesake beneath the town’s world-famous basilica.

“We saw him overcome with emotion at the tomb,” Fortunato said. “There was deep dialogue and intense prayer between the Argentinian Francis and Francis of Assisi. He said he chose the name Francis because he was a man of peace, a man of the poor and a man who supported all creation.”

The "Francis effect" on the town appears to be real: Fortunato said that since the pope’s first visit in 2013, the number of visitors to Assisi has risen from 4.5 million to 6 million a year.

“This is the home of spirituality,” Fortunato said as he paused between an intense round of last-minute meetings. “Pilgrims who come to Assisi go home reconfirmed in their faith. Those who come out of curiosity or for their love of art and culture return home as pilgrims.”

The town’s souvenir stores are filled with tiny statues, calendars, key chains and T-shirts bearing images of Pope Francis and his namesake.

Yet if the number of visitors is on the rise, merchants say they are not spending and many of the shops seem to be nearly empty.

Shopkeepers who rely on tourism for their survival are concerned that too many visitors pass through town on a fleeting day trip. Others say that recent terrorist attacks in Europe and the earthquakes in central Italy have frightened visitors away.

But the town’s recently elected mayor, Stefania Proietti, credited the pope for giving the region’s tourism a boost while also insisting that Catholics account for only a small share of Assisi’s visitors.

Proietti, a Catholic with two children -- named Giovanni Paolo and Francesco after her two favorite popes -- described the pope’s previous visit as “extraordinary” and said his latest visit will be a “great opportunity” for Assisi.

“The pope draws the world’s attention to Assisi across the board," she says. "And as mayor I feel a responsibility to send a message to the world that we are universal.”

September 21, 2020
Related Posts
By Claire Giangravé
Nationalism 'must not prevail,' Pope Francis says, addressing the United Nations
By Claire Giangravé
Pope Francis’ team joins up with star athletes like Ronaldo to say: ‘We all run together’
By Yonat Shimron
Mark Galli, former Christianity Today editor and Trump critic, to be confirmed a Catholic
By Claire Giangravé
Global missionary efforts have taken a hit in the time of coronavirus
By Edith Szanto
The world's largest Muslim pilgrimage site? Not Mecca, but the Shiite shrine in Karbala