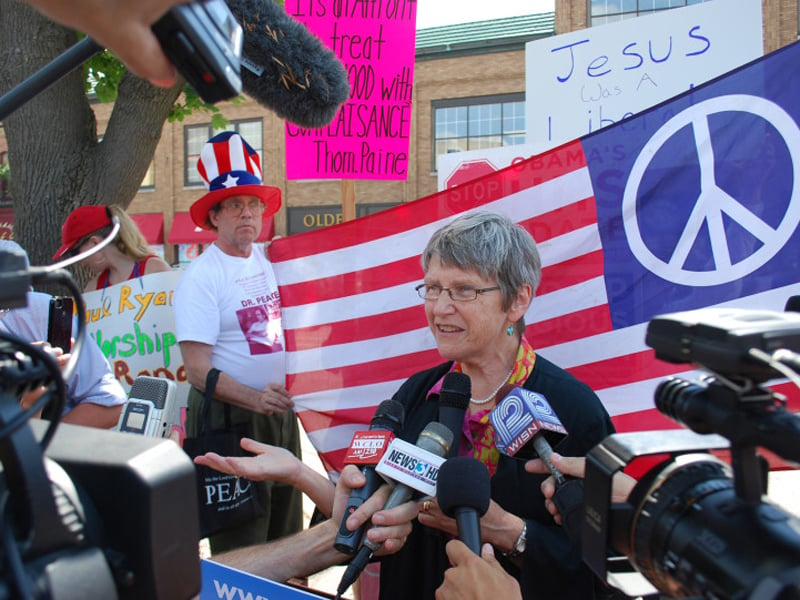 Sister Simone Campbell talks to the press right after the nuns' meeting with a representative of Rep. Paul Ryan, R-Wis., in Janesville, Wis., in 2012. RNS photo by Phil Haslanger
September 21, 2016
Charles C. Camosy

(RNS) Sister Simone Campbell, executive director of the Catholic social justice group NETWORK and the leading voice of the “Nuns on the Bus” campaign, is a regular guest on progressive TV, radio, and internet shows.

Perhaps her most consistent critique of those she disagrees with politically is an echo of what is regularly said countless times on those very same shows by secular guests. Pro-lifers who want abortion legally restricted are dismissed as “pro-birth rather than pro-life.” Campbell believes that, unlike her political opponents who don’t care about protecting and supporting people after birth, she has “a consistent ethic of life.”

These are deeply problematic positions.

First, calling someone a name like “pro-birth” is not a serious attempt to understand their position. Except for a tiny number of ultra-radical libertarians, almost everyone who wants abortion restrictions also supports Medicaid, Medicare, some form of food stamps and other welfare, public education, student loans and grants based on need, and more.

Many pro-lifers (especially the 1 in 3 Democrats who so identify) support even more substantial protections and assistance. My book on abortion, for instance, argues for both equal protection of the law for prenatal children along with paid family leave, subsidized child care, workplace protections for mothers, and other similar measures.

Even pro-life conservatives are now beginning to support some version of paid family leave.

So, no, pro-life conservatives are not “pro-birth.” Campbell simply has an honest disagreement with conservatives who are skeptical of an expanded role for an energetic government trumping the claims of autonomy and privacy of the individual in favor of protecting the most vulnerable.

Though she has said that she is against abortion and wishes that women would bring their babies to term, in an interview with Democracy Now she said that she “doesn’t think it’s a good policy” to protect prenatal children with the law. When it comes to abortion, she believes that the autonomy and privacy of the individual trumps the government’s interest in protecting the vulnerable.

If we take her at her word that she is against abortion as the killing of a vulnerable member of the human family, then she has a position which is structurally very similar to that of conservatives who want to resist poverty and other evils which threaten the vulnerable, but are skeptical of the ability of government to help with such a struggle.

If we accept the assumptions of Campbell’s “pro-birth” critique, but apply them to her position on abortion, then she cannot claim to have a consistent ethic of life either. Such assumptions mean that her desire to protect the vulnerable also applies only to certain members of the human family. Millions and millions of voiceless, vulnerable, prenatal children are -- when we use the standard she uses when criticizing conservatives -- less worthy of protection than those who are already born.

In place of this approach all of us should work harder to -- using a moral framework Campbell often invokes -- check our birth privilege. Following Catholic social doctrine, our preferential option for the most vulnerable must trump a focus on autonomy and privacy.

It will, at the very least, mean becoming more likely to support the policies of several European countries that ban abortion after the prenatal child turns 12 weeks old.

Sadly, Campbell seems to be moving in the direction of less protection for prenatal children. When asked in the Democracy Now interview about her reaction to Ilyse Hogue of NARAL Pro-Choice America celebrating her abortion in front of a cheering crowd at the Democratic National Convention, Campbell responded by saying that it was “touching and compelling.”

These are not the words of someone who thinks the dismemberment of a prenatal child is a great evil, but is skeptical of an intrusive government in dealing with the problem. No one could say what Sister Campbell said if they agree with Pope Francis’ view that our prenatal sisters and brothers “have the face of Lord” as the least among us.

I invite Sister Campbell to join that movement.

(Charles C. Camosy is associate professor of theological and social ethics at Fordham University and co-editor of "Polarization in the US Catholic Church: Naming the Wounds, Beginning to Heal")