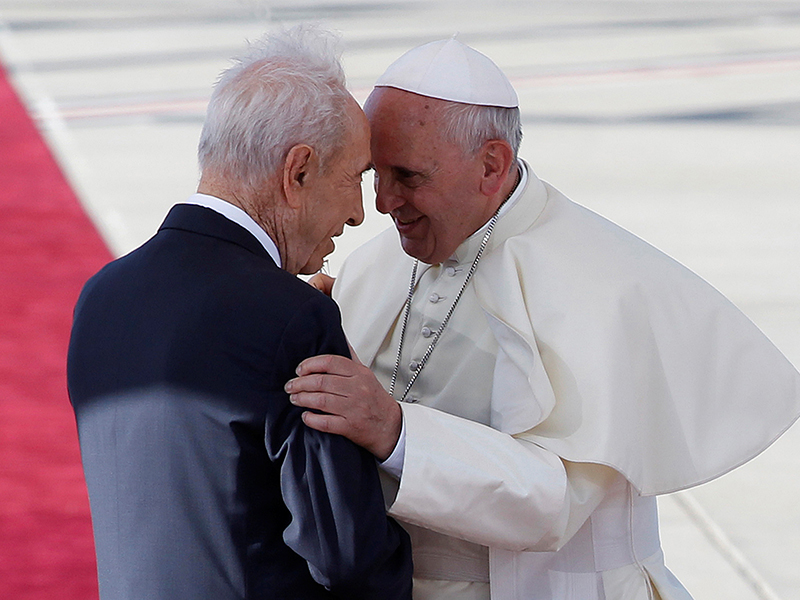 Israel's President Shimon Peres, left, stands with Pope Francis during a welcoming ceremony at Ben Gurion international airport near Tel Aviv, Israel on May 25, 2014. Photo courtesy of Reuters/Baz Ratner/File Photo *Editors: This photo may only be republished with RNS-PERES-OBIT, originally transmitted on Sept. 28, 2016.
September 28, 2016
Lauren Markoe

Israel's President Shimon Peres, left, stands with Pope Francis during a welcoming ceremony at Ben-Gurion International Airport near Tel Aviv, Israel, on May 25, 2014. Photo courtesy of Reuters/Baz Ratner/File Photo *Editors: This photo may only be republished with RNS-PERES-OBIT, originally transmitted on Sept. 28, 2016.

(RNS) Shimon Peres, the former president and prime minister of Israel, and recipient of the Nobel Peace Prize for the Oslo Accords he negotiated with Palestinians in 1993, died Wednesday (Sept. 28) after a stroke.

Peres, who was 93, was the last major surviving founder of Israel, and evolved from a hawkish defender of the Jewish state to a champion of the two-state solution in which Israelis and Palestinians would co-exist in peace.

Religious leaders remember him for reaching out to people he once considered his enemies.

Rabbi Rick Jacobs, president of the Union for Reform Judaism

"In his final speech before the Knesset, as former Israeli President Shimon Peres ended his term in office, he said 'I have come to bid you farewell as a citizen, as a man whose dream is still alive.' And indeed, not only did his dreams -- and his extraordinary steadfastness, brilliance, and ingenuity -- make him an integral part of the nation of Israel from its founding until today, his hope was infectious and his optimism was an inspiration.

"Shimon Peres understood that the greatness of Israel lies in its embrace of our better selves, and he spent his life challenging himself and others to reach for the impossible. Often, he achieved it."

Barukh Dayan HaEmet. This is the end of an era. May the dreamer's dreams continue to inspire us. @USCJ @USYTweets @PresidentPeres https://t.co/hm3sHE6myA

"Shimon Peres was the great visionary of Israeli politics in our time. The tough edge of his early career softened over time into a distinctive economic and technological road map to peace in the Middle East. Though he received the Nobel Prize for the efforts in the Oslo peace process his greatest achievements came toward the end of his long career in public life, as President of the State of Israel. It was in this capacity that he became one of the great statesmen of our time, a living embodiment of the prophet Joel’s remark that 'Your old men shall dream dreams,' helping the young to 'see visions.' He constructed a compelling vision of hope."

In a telegram to Israeli President Reuvin Rivlin, the pope says he was "deeply saddened" to learn of Peres' death and offers his condolences. "I fondly recall my time with Mr. Peres at the Vatican and renew my great appreciation for the late President's tireless efforts in favor of peace. As the State of Israel mourns Mr. Peres, I hope that his memory and many years of service will inspire us all to work with ever greater urgency for peace and reconciliation between peoples. In this way, his legacy will truly be honored and the common good for which he so diligently labored will find new expressions, as humanity strives to advance on the path towards enduring peace. With the assurance of my prayers for all who grieve, especially for the Peres family, I invoke the divine blessings of consolation and strength upon the nation." 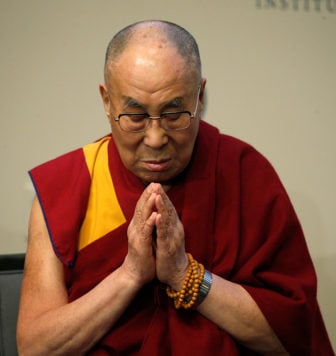 The Dalai Lama prays for the victims of the Orlando shootings before speaking at the U.S. Institute of Peace in Washington, D.C., on June 13, 2016. Photo courtesy of REUTERS/Kevin Lamarque

"I offer my prayers for him and convey my condolences to the members of his family at this difficult time. Mr. Peres and I met on several occasions in different places over the years, the last being Jordan in 2006 when we were attending a conference of Nobel Laureates and other thinkers addressing global concerns. I admired his efforts to promote peace between Israel and Palestine, which actually did lead to the historic Oslo Peace Accords of 1993." Noting that Peres often spoke of the importance of compromise, the Dalai Lama quoted him once saying that as the Palestinians were Israel's "closest neighbors" they might become its "closest friends.” The Dalai Lama concluded: "I pray that this may soon come true."