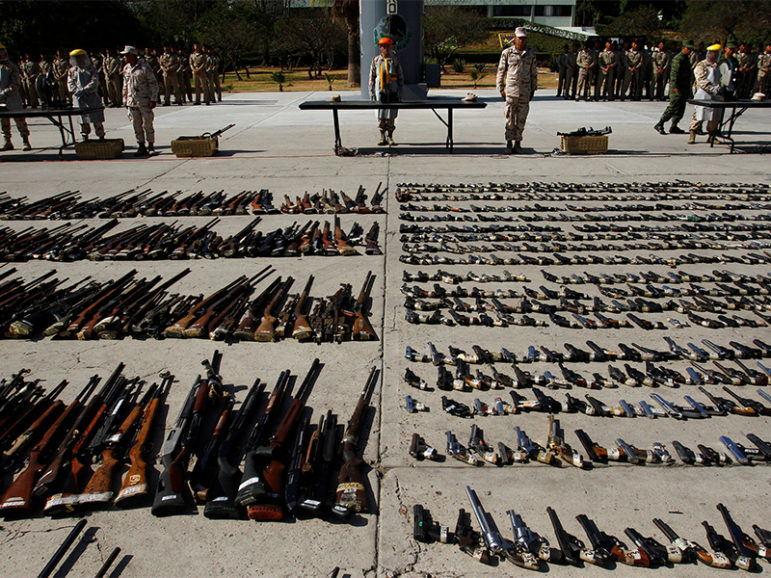 Weapons seized from criminal gangs are displayed before being destroyed by military personnel at a military base in Tijuana, Mexico, on August 12, 2016. Photo courtesy of REUTERS/Jorge Duenes

GUADALAJARA, Mexico (RNS) Even in a rural Mexican community that has grown accustomed to the news of brutal killings, the abduction and murder of a popular Catholic priest has triggered profound shock and outrage.

The bullet-ridden body of the Rev. Jose Lopez Guillen was found Sept. 24 on the highway outside Puruandiro in the western state of Michoacan, a region plagued by violent conflict. The 43-year-old cleric had been abducted from his home in nearby Janamuato five days earlier.

“He was an engaging personality,” said Maria Solorio, a regular at Lopez’s church. “He was an excellent priest and very devoted to the community. … What happened to him was a great injustice.”

Such injustices have been piling up and have prompted questions about whether the church is under attack or whether the clergy are just collateral damage in a wider wave of violence.

Lopez was kidnapped on Sept. 19, the same day authorities discovered the bodies of two slain priests in the eastern state of Veracruz; that makes at least 15 priests slain over the past four years.

The murders come at a time of strained relations between church and state in Mexico, in part because Catholic bishops recently supported mass protests against a proposal to legalize same-sex marriage nationwide.

In the wake of the killings the church has also abandoned its normal reluctance to criticize the government and has publicly accused state officials in Michoacan and Veracruz of directing a defamation campaign against the priests.

Mexico is the country with the second-largest Catholic population in the world, with nearly 100 million people, or more than 80 percent of the population, identifying as Catholic. But the country has a long history of anti-clericalism and in the past century the government officially and often violently suppressed the church.

But that dynamic changed dramatically after constitutional reforms in 1992 and the government and hierarchy enjoyed good relations for the most part.

Motives have not been established for the latest killings, but the Catholic Multimedia Center notes that violence against the clergy occurs disproportionately in states with high levels of organized crime, such as Veracruz and Michoacan.

The organization records 31 killings of priests in Mexico since 2006, the year then-President Felipe Calderon deployed troops to Michoacan in an effort to stamp out the drug cartels.

A decade on, the war across Mexico has claimed more than 150,000 lives, while Michoacan remains a hotbed of crime and civil unrest.

Pope Francis visited the state capital, Morelia, during his Mexico trip in February, in a show of solidarity with those most affected by organized crime.

READ: Another priest slain in Mexico as Pope Francis appeals for end to violence

The intensity of the violence in Michoacan has forced some priests into social activism, although the moves are rarely welcomed by the Catholic hierarchy.

One such priest is the Rev. Jose Luis Segura Barragan, who is among the most high-profile opponents of drug cartels in the state.

After he was appointed parish priest in the town of La Ruana in 2013, Segura voiced support for the armed self-defense groups that had sprung up in response to rampant insecurity in the region. Groups of locals soon tried to drive him out of town.

“Because I didn’t leave, people fired bullets and threw rocks and fireworks at the church,” he told RNS.

Segura, who finally left La Ruana four months ago, came under the media spotlight for his views. Yet for the clergy, even keeping a low profile is no guarantee of safety. In the most dangerous states in Mexico, any resistance against cartels, however minor, can become a motive for murder.

“Priests find themselves in problems when they refuse to provide a service to drug traffickers, like a baptism or Mass,” Segura said.

Analysts generally agree, however, that violence against the clergy should be seen within the wider context of the drug war.

“It would be dishonest to say this is a targeted persecution of priests or the church,” said the Rev. Hugo Valdemar Romero, a spokesman for the Archdiocese of Mexico City. “But the fact that you are a priest does not liberate you from the risk of robbery, murder or torture.”

While anti-clericalism is not blamed, the Rev. Omar Sotelo of the Catholic Multimedia Center said the role of the clergy makes them particularly vulnerable to crime. Priests as a matter of course come into contact with a great variety of people, some of whom may be criminals.

“The violence against priests often has to do with their pastoral work,” Sotelo said. “These are not just common crimes.”

Some critics have accused Mexican bishops of concentrating on social matters such as same-sex marriage while turning a blind eye to the politically sensitive topic of violence.

“The church is focused on sexual issues,” said the Rev. Alejandro Solalinde, a priest and famous activist. “They don’t organize many marches to protest injustice, government corruption and impunity.”

But attempts by prosecutors to link recently murdered priests with crime and criminals seem to have convinced church officials to speak out against the government.

Surveillance footage apparently showing Lopez entering a hotel with an underage boy was leaked to a media outlet in Michoacan. It caused an uproar until a woman on social media identified the pair as her ex-husband and son, not the murdered priest.

Similarly, State Attorney General Luis Angel Bravo Contreras was criticized for claiming the two priests in Veracruz had been drinking heavily with their killers before the crimes.

Church officials have responded with a vigorous defense of the victims.

“We demand that no priest, or anyone, be slandered, especially before the investigations are concluded,” the Mexican bishops’ conference wrote Sept. 26, a day after Lopez’s body was discovered.

“This is a common strategy,” said Solalinde. “They criminalize victims in an effort to contain the public outcry.”

In this Mexican context of crime, corruption and impunity, Solalinde believes violence against priests suggests they are truly living their vocation.

“This persecution is a sign that priests are defending human rights,” he said.

Solalinde has himself been threatened by criminals on multiple occasions.

“If one day something happens, it happens,” he said. “But I refuse to let that worry me.”

Religion Hub
Jesuits remain in Mexican mountains after priests’ killings
Follow us on Facebook!
Submit your photos to RNS