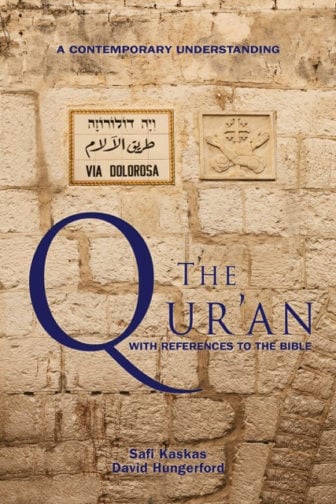 (RNS) By the authors’ count, the Quran has been translated into English 212 times since the 17th century — but never like this.

Two friends, one Muslim and one Christian, have just published a Quran for English speakers to help fulfill a sacred shared mission: to show people of the world’s largest and second-largest faith groups how much their holy books have in common.

“Most of the tension that exists in the West in the post-9/11 era is because Christians fear Muslims and their book, the Quran,” said Safi Kaskas, the Muslim co-author of “The Qur’an  With References to the Bible.”

“This new translation was designed to be a tool of reconciliation between Muslims and the followers of other Abrahamic religions.”

Kaskas started on the project 10 years ago with David Hungerford, a retired orthopedic surgeon who hopes his fellow Christians may look upon Muslims with less suspicion when they realize how many stories in the Bible have parallels in the Quran. 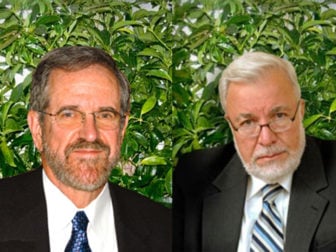 Dr. David Hungerford, left, and Safi Kaskas, are co-authors of the new book, “The Qur’an With References to the Bible.” Photos courtesy of Bridges to Common Ground

“In today’s society, no one talks about this common ground between the Abrahamic faiths, much of which is centered around the person of Jesus of Nazareth,” said Hungerford.

Jesus is an important divine figure in the Quran, where he is known as “Esa.”

The new translation shows more than 3,000 parallels between the two religious texts in a split-page format. The top of each page is the English translation of the Quran, and the bottom shows the analogous biblical verses, from the New Revised Standard Version — which  account for 40 percent of the book.

The sixth of the Quran’s 114 chapters, for example, includes this verse (or “aya” in the Quran’s original Arabic):  “Praise be to God, who created the heavens and the earth and made darkness and light; but, the unbelievers regard others as equal to their Lord.”

On that same page, Kaskas and Hungerford refer the reader to Genesis 1:3-5 — “Then God said ‘Let there be light;’ and there was light,” and also Isaiah 46:5: “To whom will you liken me and make me equal, and compare me, as though we were alike?”

Few Quranic passages in the translation lack biblical references, though some are far closer in language and meaning than others.

The book is a project of Bridges to Common Ground, a nonprofit founded to reduce anti-Muslim attitudes among Christians, and to prevent the radicalization of young Muslims, on the theory that knowledge of each other’s holy books will reveal common values.

“Our intent is not at all to convert readers from one faith to another, or merge the two religions into one,” Kaskas said. “Rather we seek to build bridges of understanding among people of the three Abrahamic faiths.”