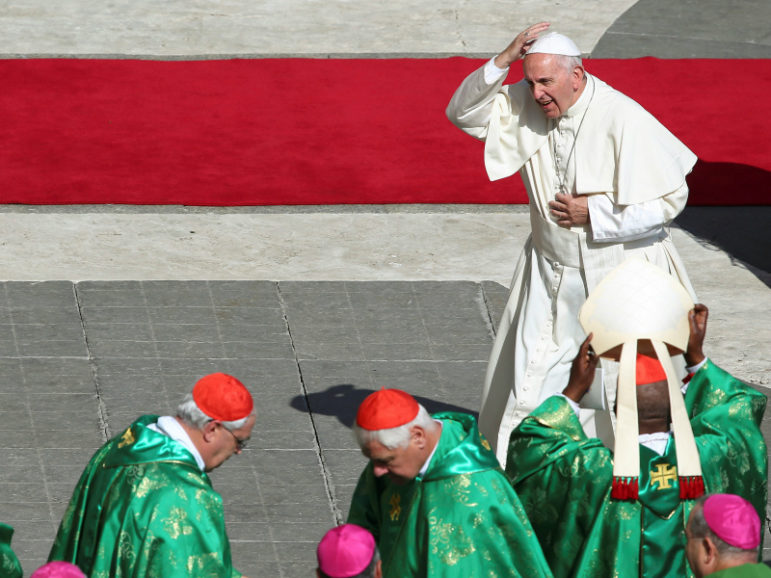 Pope Francis leaves at the end of a Marian vigil Mass in St. Peter’s Square at the Vatican, Oct. 9, 2016. He later announced his intention to create 17 new cardinals, including three Americans. Photo via Reuters/Alessandro Bianchi

VATICAN CITY (Reuters) Pope Francis on Sunday (Oct. 9) promoted 17 Roman Catholic prelates from around the world to the high rank of cardinal, including 13 who are under 80 years old and thus eligible to succeed him one day.

Three are from the U.S., the first Americans Francis has named as cardinals:

They are Archbishop Blase Cupich of Chicago, Archbishop William Tobin of Indianapolis and Bishop Kevin Farrell of Dallas, who was recently appointed to head a new Vatican department on family and life issues.

Cardinals, who wear red hats and are known as “princes of the church,” are the most senior members of the Roman Catholic hierarchy after the pope and serve as his principal advisers around the world and in the Vatican.

Naming new cardinals is one of the most significant powers of the papacy, allowing a pontiff to put his stamp on the future of the 1.2 billion-member global church.

Cardinals under 80, known as cardinal-electors, can enter a secret conclave to choose a new pope from their own ranks after Francis dies or resigns. Francis, the former cardinal-archbishop of Buenos Aires, was elected in a conclave on March 13, 2013.

Significantly, Francis said the current Vatican ambassador in Syria, Italian Archbishop Mario Zenari, would be elevated but remain in his post to show the church’s concern for “beloved and martyred Syria” — an allusion to the devastating civil war there.

It was believed to be the first time in recent history a Vatican ambassador, known as a nuncio, would have the rank of cardinal.

The pope has made numerous appeals for an end to Syria’s war, and last month he urged forces to stop bombing civilians in Aleppo, warning them they would face God’s judgment one day.

The four new cardinals over 80, who get the position as a symbolic honor to thank them for long service to the church, include the Rev. Ernest Simoni, 88, an Albanian priest who spent many years in jail and forced labor during the communist dictatorship of Enver Hoxha, who died in 1985.

Francis, making the surprise announcement during his weekly Sunday address, said the ceremony to elevate the prelates, known as a consistory, would be held on Nov. 19.

With the current batch, Francis has named 44 cardinal-electors, slightly more than two-thirds of the total of 120 allowed by church law.

It will be his third consistory since his election in 2013 as the first non-European pontiff in 1,300 years, and he has used each occasion to show support for the church in far-flung places or where Catholics are suffering.

The Central African Republic, Bangladesh, Papua New Guinea, Malaysia and Lesotho will have a cardinal for the first time, underscoring Francis’ conviction that the church is a global institution that should become increasingly less Euro-centric.

Last year the pope visited Bangui, capital of the Central African Republic. Amid some of the tightest security ever seen on his trips, he preached reconciliation in the nation racked by bloodshed between Muslims and Christians.

Only one of the 13 cardinal-electors will take on a Vatican job. The others would remain in their posts around the world.

In addition to Simoni, the Albanian priest, the other three cardinals over 80 come from Malaysia, Italy and Lesotho.

Here is the list of new cardinals, via Vatican Radio: