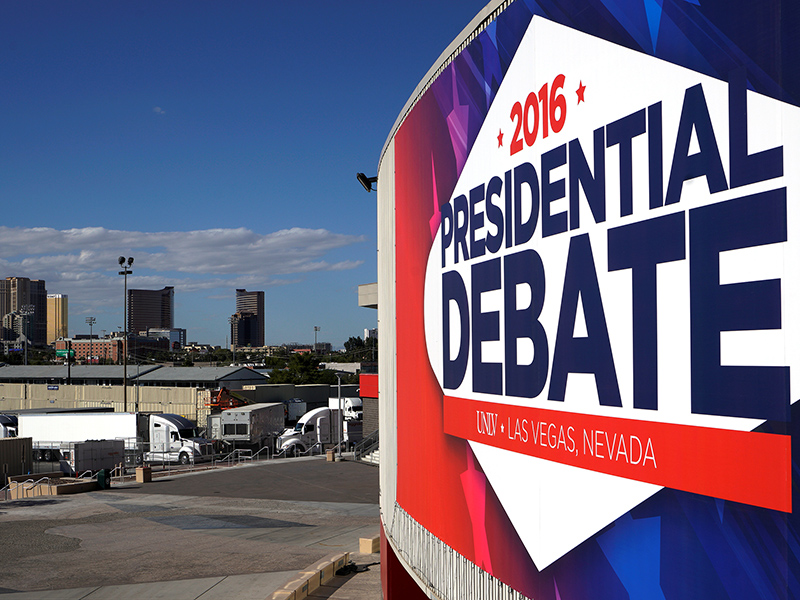 A banner hangs at the University of Nevada, Las Vegas, site of the last 2016 U.S. presidential debate and within sight of hotels on the Strip in Las Vegas on Oct. 17, 2016. Photo courtesy of Reuters/Rick Wilking *Editors: This photo may only be republished with RNS-CAMOSY-OPED, originally transmitted on Oct. 20, 2016.
October 20, 2016
Charles C. Camosy

A banner hangs at the University of Nevada, Las Vegas, site of the last 2016 U.S. presidential debate and within sight of hotels on the Strip in Las Vegas on Oct. 17, 2016. Photo courtesy of Reuters/Rick Wilking *Editors: This photo may only be republished with RNS-CAMOSY-OPED, originally transmitted on Oct. 20, 2016.

(RNS) For the first time in three general election debates, a moderator asked the presidential candidates Wednesday (Oct. 19) about abortion.

Given that abortion has rightly been described as the source of America’s second civil war, there has been a baffling lack of engagement with it this election cycle.

Supreme Court abortion decisions are automatically breaking news. The topic divides many different kinds of communities, including churches. It wrecks friendships. In many circles, it is the primary reason for choices about whether to vote for this or that candidate.

But for a topic so complex and combustible, one intervention in one debate is not anything close to what is necessary to have a coherent conversation.

Indeed, our current national conversation has been anything but coherent for some time now.

We have Republicans, the party of small government and staying out of the lives of individuals, asking for a huge and intrusive government to create laws banning abortion, which of necessity will override the very personal liberty they claim to stand for.

Meanwhile, we have Democrats, the party of energetic government and protecting the vulnerable from the powerful, arguing that government should stay out of our lives and protect the autonomy and freedom of the powerful.

It is into this discourse that Republican Donald Trump and Democrat Hillary Clinton have been thrust -- with predictable results.

Until recently, Trump was “pro-choice in every respect,” including partial-birth abortion. Even after his well-timed anti-abortion conversion, Trump rarely brings it up of his own volition.

When asked about the Supreme Court in the second debate, for instance, Trump talked about gun owners but not about prenatal children. He claimed that his pro-choice sister would make a great Supreme Court candidate. As recently as this past April, he said our abortion laws “are set” and shouldn’t be changed.

Perhaps that is why last night, when Chris Wallace asked him three times if he personally wanted Roe v. Wade overturned, Trump refused to answer. He’s done this consistently in the past, and it is strong evidence that he has been forced to take a position he doesn’t agree with in order to be politically viable.

Such is the nature of our incoherent abortion discourse.

Unfortunately, Clinton has been put into a similar situation. During the 2008 primaries, Clinton insisted abortion should be rare. “And by rare, I mean rare,” she said.

This was no accident. Through most of her life Clinton has been deeply ambivalent about abortion. In the past she has called it “morally wrong” and supported late-term restrictions after what she called “the unborn person” is viable.

Now, however, the Democratic Party’s leadership is dominated by abortion rights extremists who see it as “core to women’s, men’s, and young people’s health and wellbeing.” Any talk of immorality or limits has been ruled out. Abortion is to be available through all nine months of pregnancy for any reason. And it must be paid for by the American taxpayer, even by those of us who consider it to be the killing of the most vulnerable.

To be politically viable, Clinton has been forced to accept the position that, on abortion, nothing matters but individual autonomy, freedom and choice of those seeking abortions.

The American public is not served well either by the parties’ incoherence on abortion, or the media’s continued insistence on using outdated categories and assumptions. It is way past time to reject the idea that the abortion debate is a “life vs. choice” binary. Let's allow some complexity and nuance to emerge.

Clinton was pressed in last night’s debate on her newfound support for late-term abortion, and with good reason. A 2016 Marist Poll found that "about 8 in 10 Americans support substantial restrictions on abortion (78 percent), and would limit it to, at most, the first three months of pregnancy. This number includes 62 percent of those who identify as pro-choice, 85 percent of African-Americans and 84 percent of Latinos," as well as 80 percent of women.

After 12 weeks, however, support for legal abortion restrictions plummets by more than 50 percent. In addition, an overwhelming majority of Americans (including 3 in 4 who identify as abortion opponents) want to see abortion legally available in cases of rape and when the mother’s life in danger.

Despite these facts, we are fed the narrative that the national debate is between small-government Republicans who want to want to use a big government to ban all abortion and big-government Democrats who want no government restrictions on any abortion for any reason.

That narrative, simply put, is nonsense. Our media and parties must be pushed to have a fact-based, coherent discussion of our abortion discourse that reflects what Americans actually think about abortion.

Such a discourse would not only honor the complex and difficult question at stake in the debate, it also would free up presidential candidates to have a position that reflects what they actually believe about abortion.

(Charles C. Camosy is associate professor of theological and social ethics at Fordham University and author of "Beyond the Abortion Wars: A Way Forward for a New Generation")

September 21, 2020
Related Posts
By D.L. Mayfield
How a Sean Feucht worship service convinced me I am no longer an evangelical
By Thomas Reese
National Catholic Prayer Breakfast award for Barr divides Catholics
By Jack Jenkins
Amy Coney Barrett, controversial Catholic, re-emerges as potential Supreme Court pick
By Mark Silk
With Ginsburg's seat open, abortion moves to the center of the 2020 election
By Emily Reimer-Barry
Winning the hearts and minds of Catholics in a church divided