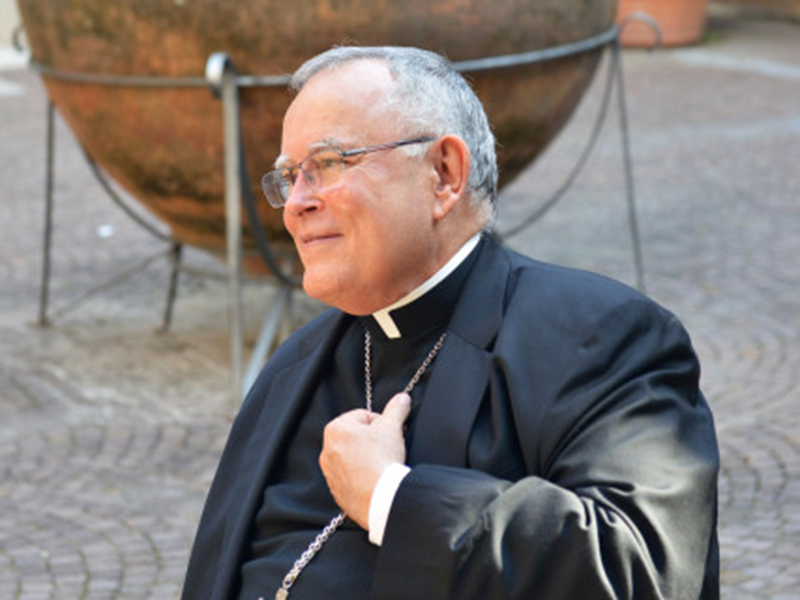 Archbishop Charles J. Chaput, during the Festival of Families announcement at the Pontifical North American College in Rome on June 23, 2015. Photo courtesy of Chris Warde-Jones, Archdiocese of Philadelphia

(RNS) In a stark prognosis for contemporary Catholicism, a leader of the conservative wing of the U.S. hierarchy has said that “a smaller, lighter church” of fewer but holier believers is preferable to one that promotes inclusion at the expense of traditional orthodoxy.

In a speech delivered Wednesday (Oct. 19) at the University of Notre Dame, Philadelphia Archbishop Charles Chaput also suggested that many prominent Catholics are so weak in their faith that they ought to leave the church.

Chaput singled out Democrats such as Vice President Joe Biden and vice presidential nominee Tim Kaine for special criticism, linking them to the concept of a “silent apostasy” coined by Pope Emeritus Benedict XVI and saying Catholics who do not champion the truth of church teaching are “cowards.”

“Obviously we need to do everything we can to bring tepid Catholics back to active life in the church,” Chaput told a symposium for bishops and their staff members at the South Bend, Ind., campus.

“But we should never be afraid of a smaller, lighter church if her members are also more faithful, more zealous, more missionary and more committed to holiness.

“Losing people who are members of the church in name only is an imaginary loss,” he continued. “It may in fact be more honest for those who leave and healthier for those who stay. We should be focused on commitment, not numbers or institutional throw-weight.”

Chaput’s ideas channeled a lively and long-standing debate in church circles — intensified by Pope Francis’ open-arms approach to ministry — about whether Catholicism should be a smaller and more tradition-minded community or a larger and more inclusive church of imperfect believers at various stages in their spiritual pilgrimages.

In the context of the coming presidential vote, Chaput’s speech was also the latest in a series of pronouncements by conservative bishops and Catholic activists who have blasted Democrats as Election Day draws closer.

For many observers, a chief focus of the current campaign has been the crass and increasingly threatening language of Republican nominee Donald Trump, who has bragged about demeaning and groping women. In the third and final presidential debate on Wednesday, Trump also reiterated that he believes the Nov. 8 election has been “rigged” and that he might contest any result that did not favor him.

But the U.S. bishops have been virtually silent on those topics, while some have continued to highlight the centrality of opposition to abortion and gay marriage.

In his talk at Notre Dame, Chaput, who is known for his conservative political views and his firm stances on doctrine, said both candidates were obviously flawed — though he did express admiration for Trump’s “gift for twisting the knife in America’s leadership elite and their spirit of entitlement, embodied in the person of Hillary Clinton.”

Chaput’s main focus, however, was on the wider threat posed by what he said was a secularizing culture and a progressive political agenda that “bleaches out strong religious convictions in the name of liberal tolerance.”

Too many Catholics are are guilty of cooperating with that process, he said, transferring “our real loyalties and convictions from the old church of our baptism to the new ‘church’ of our ambitions and appetites.”

He named Biden, Kaine and House Minority Leader Nancy Pelosi as prime examples of this phenomenon, as well as Supreme Court Justice Anthony Kennedy, a Catholic and Republican appointee whose deciding vote in the landmark 2015 gay marriage case made him anathema to many social conservatives.

The politics of the U.S. hierarchy are in flux largely because Francis, who was elected in 2013, has begun naming and promoting bishops who embrace his outgoing approach to ministry and evangelization.

That trend away from the “culture warrior” bishops who came to dominate the U.S. Conference of Catholic Bishops over the past three decades was evident in the men Francis chose this month as his first American picks to be cardinals.

The three — the archbishops of Chicago and Indianapolis and the former bishop of Dallas — are known as for their moderate tone and pastoral style while hard-liners like Chaput, who in a previous era might have been a strong candidate for a red hat, were passed over.

But Chaput, 72, and other conservatives in the U.S. hierarchy have been speaking out with greater frequency about the election. They tend to lament Trump’s obvious faults while singling out the Democratic ticket for special criticism and noting that opposition to legal abortion — which is part of the Republican platform and a Trump campaign promise — overrides every other policy consideration.

For example, Archbishop Joseph Naumann of Kansas City, Kan., last week devoted a column to criticizing Kaine’s faith and his position in support of abortion rights, calling him an “orthodox” Democrat and a “cafeteria Catholic” who is “picking and choosing the teachings of the Catholic Church that are politically convenient.”

The WikiLeaks dump of Democratic emails this month provided another opening because they included a few exchanges among Clinton advisers complaining about conservative Catholics misusing the faith for their own agendas and discussing how they could promote a “Catholic Spring” to move the church in a more progressive direction.

Conservative activists and the Trump campaign jumped on the emails as evidence of an endemic anti-Catholicism among Democrats and demanded that Clinton fire the advisers and apologize.

Leaders of the USCCB also criticized the Clinton campaign for interfering “in the internal life of the Church for short-term political gain.”

New York Cardinal Timothy Dolan, who is hosting Clinton and Trump at the Al Smith charity dinner on Thursday, called the email exchanges from 2011 and 2012 “extraordinarily patronizing and insulting to Catholics.” He said Clinton would have apologized in minutes if those things had been said about Jews or Muslims.

Other Catholics pointed out that the participants in the back-and-forth were mainly Catholics themselves and they dismissed the exchanges as the sort of internal church arguments that Catholics engage in publicly all the time. They also said the comments were not as harsh as remarks Trump himself has made about Francis.

Chaput has blasted the emails as “contemptuously anti-Catholic” and he criticized the Democrats for them again in his talk this week.

But his central theme was how Catholics should respond to this cultural shift.

He said that despite his “long list of concerns with the content of Islam” he admired  Muslim women who proudly wear the hijab and said Catholics could learn from that as they seek to “recover their own sense of distinction from the surrounding secular meltdown.”

He also praised Francis’ emphasis on “accompaniment” as the way to draw people to the church and keep them there.

But he said that term has also been misused and too often means “accompanying someone over a cliff” by not insisting on the need to follow church teachings.

The same, he said, goes for the term “inclusive.”

“If ‘inclusive’ means including people who do not believe what the Catholic faith teaches and will not reform their lives according to what the church holds to be true, then inclusion is a form of lying,” he said.

“And it’s not just lying but an act of betrayal and violence against the rights of those who do believe and do seek to live according to God’s Word.”

Signs of the Times
Avoiding a deadlocked conclave
Follow us on Facebook!
Submit your photos to RNS