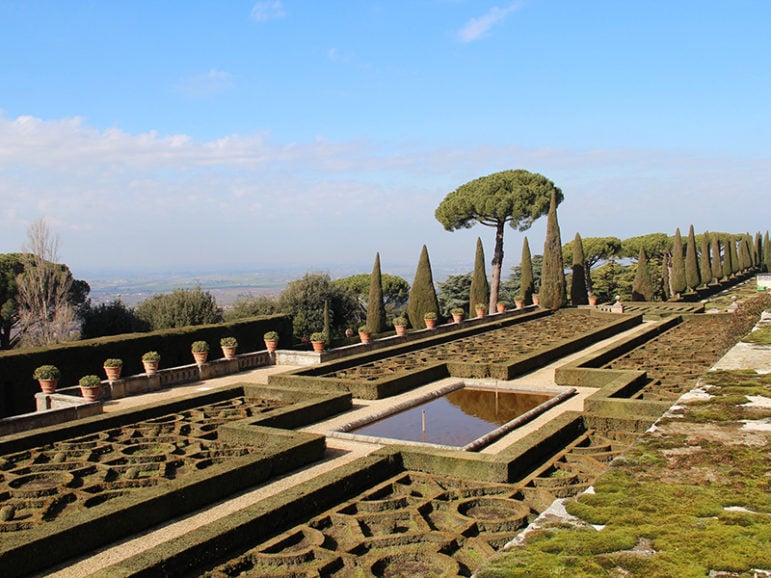 CASTEL GANDOLFO, Italy (RNS) He rejected his sumptuous Vatican apartment and chose a Ford Focus to get around town. Now Pope Francis is giving up the historic summer residence where pontiffs have holidayed for nearly 400 years.

Without ever having spent a night there, the pope ordered the apostolic palace and gardens at Castel Gandolfo, about 15 miles from Rome, be turned into a museum.

It officially opened on Friday (Oct. 21), giving the public an intimate look inside the palace where a succession of popes lived and died.

“It is an event of strong symbolic value because it represents the pastoral policy of this pope,” said Antonio Paolucci, director of the Vatican Museums, which will be responsible for running the Castel Gandolfo museum. 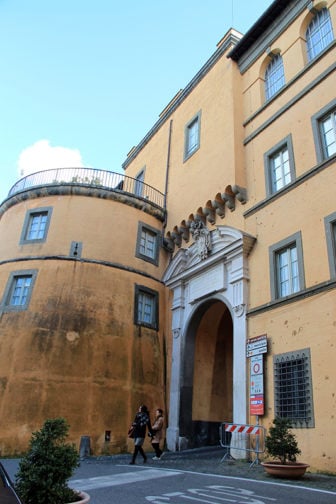 Pope Francis is turning Castel Gandolfo into a museum for the public. RNS photo by Josephine McKenna

“His suburban villa is such a masterpiece of architecture, art and nature that so many of his predecessors lived here,” Paolucci said. “But it does not interest him.”

Since Francis was elected in 2013, he has shaken up the Catholic Church by rejecting the traditional trappings of the papacy and making his home in a simple apartment inside the Santa Marta residence at the Vatican.

He rarely seems to slow down his demanding work schedule, even in the summer months.

While Francis has visited the Castel Gandolfo palace only a couple of times since his election, Saint John Paul II (1978-2005) and Pope Emeritus Benedict XVI (2005-2013) often stayed at the hilltop palace. But not all of Francis predecessors felt a strong attachment to the place.

Benedict flew to the palace by helicopter two weeks after he announced his history-making resignation in 2013, and Francis later met him there for private talks soon after he was elected.

This is the first time the public will have the chance to see inside the plush apartment, which includes a private chapel, library and study used by successive popes from the 1600s onwards.

Visitors will also see the bed where Popes Pius XII and Paul VI died and where John Paul II recovered from an assassination attempt in St. Peter’s Square in 1981. A plush sitting room inside the papal residence, which is open to the public in Castel Gandolfo, Italy. RNS photo by Josephine McKenna

“It will always be a pontifical villa,” said Sandro Barbagallo, curator of the Vatican Museums’ historical collections. “It is only that Pope Francis, with his great generosity, has allowed everyone to see it.”

A former fortress, the palace has been owned by the Holy See since 1596 and has been expanded over the centuries to cover 135 acres.

It was also a refuge for 12,000 local residents who fled some of the bloodiest battles of World War II as Allied troops swept up the Italian peninsula after landing in Anzio in 1944.

The Vatican says some of the displaced were pregnant at the time and as many as 40 women gave birth on the pope’s bed itself bearing offspring dubbed “the pope’s children.”

In 2014, the expansive gardens were opened to visitors, in part to help offset the economic downturn the town had suffered since Francis decided to stay in Rome.

They contain extensive Roman ruins dating back to the reign of Emperor Domitian, who ruled from 81 to 96 A.D. and had a summer villa there. The property also features a working farm that supplies the Vatican with fresh milk, eggs, honey and produce.

Last year a weekly train service was started that allows both the Vatican and Castel Gandolfo to be seen in a daytrip. Visitors can tour the private apartment of the palazzo itself, including the Consistory Room where Pius XII made Angelo Roncalli a cardinal in 1953. Roncalli later became Pope John XXIII.