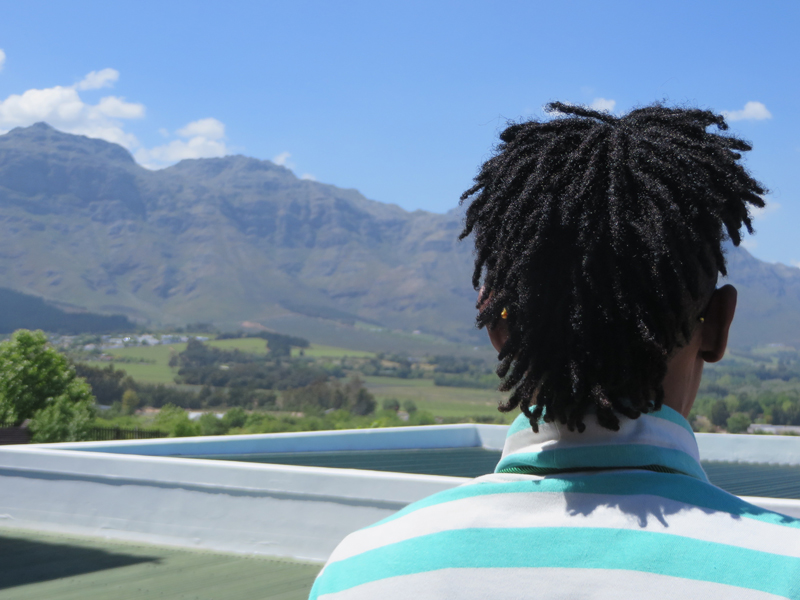 Abdullah, who asked to be photographed from behind to protect his identity, looks out at the view of the Western Cape’s mountains and vineyards during The Inner Circle’s seven-day annual international retreat in South Africa. RNS photo by Brian Pellot

CAPE TOWN, South Africa (RNS) Nestled among the Western Cape’s mountains and vineyards, thousands of miles away from his home in Algeria, Aissa Amazigh breathed a sigh of relief.

“Once the plane landed in Cape Town, I just relaxed,” Amazigh said, surveying the picturesque landscape on the horizon. “The spiritual context here is just so liberating.”

Amazigh was one of 125 queer Muslim activists and their allies — “queer” being the term many of them prefer, as the most inclusive descriptor — who came together for The Inner Circle’s seven-day annual international retreat last week in South Africa. The gathering focused on “building a movement towards an all-inclusive and compassion-centered Islam,” a mammoth task for attendees like Amazigh who live in countries where homosexuality and transgender expression are often taboo and criminalized. 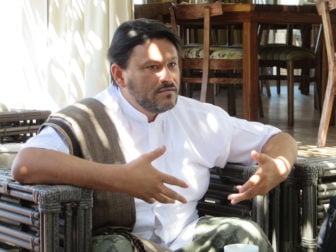 Cape Town-based Imam Muhsin Hendricks founded The Inner Circle 20 years ago in his garage as a safe space for queer Muslims. RNS photo by Brian Pellot

“Tomorrow will be very emotional,” Hendricks said before the closing ceremony at the end of a busy week. “People are already suffering withdrawal symptoms and separation anxiety because now they have to go back to these horrible contexts, and here was such a beautiful space of acceptance and love. They’re going to miss that.”

The “beautiful space” Hendricks cultivates each year has much to do with the scenery and camaraderie, but also with the legal and social environment in which the retreat is held.

As the only country in Africa to allow same-sex marriage, South Africa is a relative haven for LGBT rights. Cape Town is widely considered the continent’s playground for queer expression despite occasional homophobic attacks in the city’s townships.

Around 800,000 Muslims make up 1.5 percent of South Africa’s total population, according to recent estimates and census tallies. While the Dutch Reformed Church in South Africa voted to recognize same-sex unions in 2015, most Christian congregations representing the majority of South Africans align with most Muslim communities in opposing expanded rights and recognition for queer members of faith.

Religious and social hostilities aside, South Africa’s rights and liberties make the Western Cape a far cry from most attendees’ lived realities. 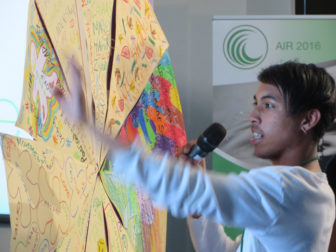 “It’s amazing to see the hardships, the toughness, the criticism they face,” Iglaas Abrahams said of his fellow participants from across Africa and around the world. RNS photo by Brian Pellot

“It’s amazing to see the hardships, the toughness, the criticism they face,” Iglaas Abrahams said of his fellow participants from across Africa and around the world.

Abrahams is openly gay and attends Hendricks’ Masjidul Umam in Cape Town, where queer men and women speak freely from the minbar or pulpit, an unusual occurrence in most mosques.

By contrast, Abdullah, who asked that his full name not be used to protect his own safety, runs an organization for queer Muslim youth in Tanzania, where same-sex sexual acts can lead to life imprisonment.

Like Amazigh in Algeria, Abdullah works mostly under the radar to help queer Muslims reconcile their sexualities with their faith and gender identities and to engage local religious communities in difficult conversations.

“Some people think there is a conflict between being Muslim and being queer,” Abdullah said. “As we grow up, we hear through verses of the Quran that people who are LGBT are sinners and cursed. We separate ourselves from our communities to avoid discrimination.”

These separations have proved emotionally and spiritually draining for many participants at the retreat.

“Most of us are wounded healers,” Hendricks said. “There was lots of anger at the beginning of this year, people sitting with their pain. We needed to address how we relate to that pain and manage it, how we relinquish control to God and move beyond identity labels and divisions.”

Hendricks says deep engagement with theology is key to this process and a core component of The Inner Circle’s annual retreat.

“The reason we have a lot of theologians here is because the current theology of Islam is very patriarchal,” Hendricks said. “We need to create an alternative voice that is strong enough to oppose the messages of condemnation that come from the orthodoxy.”

One example Hendricks cites is the Quranic story of Lot, known as Lut, a prophet to the cities of Sodom and Gomorrah, which opponents often use to depict homosexuality as being un-Islamic.

“Progressive Muslim scholars who have studied sexual orientation and gender identity issues within Islam have concluded that this story has nothing to do with sexual orientation but rather a multiplicity of atrocities — xenophobia, prostitution, social injustice,” Hendricks said. “All of those atrocities relate to privilege and power. Once people start to see that, it liberates them to think that maybe God is not condemning them.” 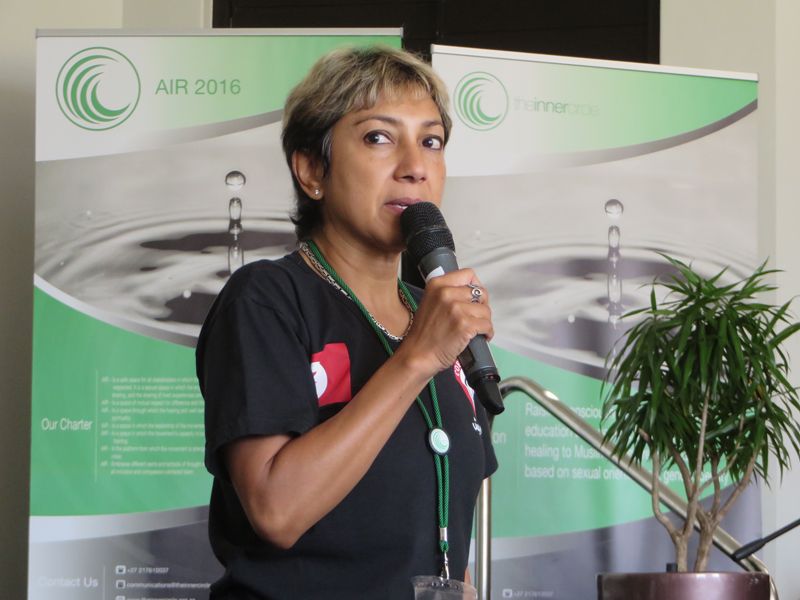 Ani Zonneveld, founder and president of the Los Angeles-based Muslims for Progressive Values, sees the benefit of this back-to-the-books theological approach.

“The theological basis from which we do our work is so important. When you speak truth and come from a place of love and care, that is how our movement grows,” she said.

Zonneveld, who identifies as Muslim but not queer, told fellow participants that she uses her ally status to expose Islamophobia, homophobia and transphobia — dislike or prejudice against transgender or transsexual people — wherever she sees it.

“Media often paints all Muslims as homophobic, meaning queer Muslims rarely fit the media’s narrative. As an ally, I’ve been able to call out Islamophobic LGBT community members in the United States. We’ve also challenged Muslim-dominant institutions to pledge to oppose homophobia and do away with transphobic and homophobic teachings.” 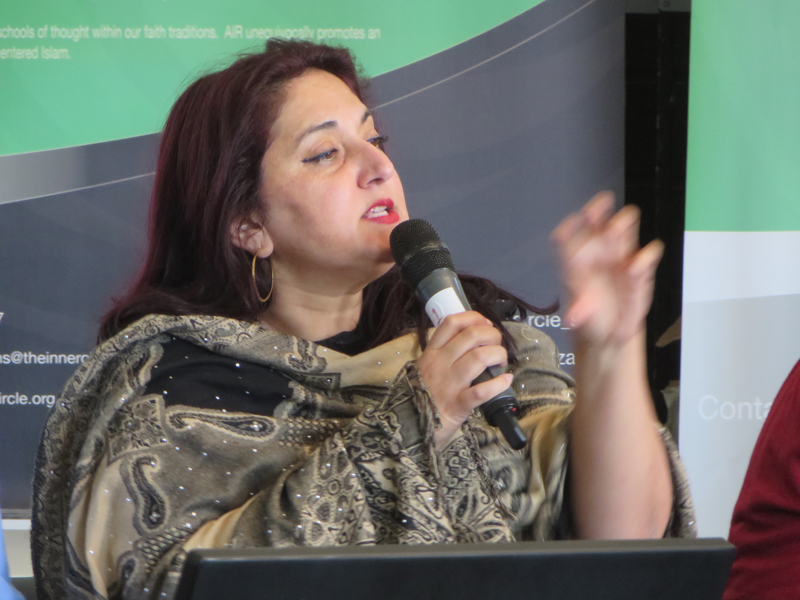 Another Muslim ally at the retreat was Shehnilla Mohamed, originally from Zimbabwe and now working from Johannesburg with the human rights and advocacy organization OutRight Action International.

“I’ve always felt drawn to this community because it’s a space that resonates with me,” she said of the predominantly queer cohort. “As a nonconforming Muslim woman, patriarchy was part of my struggle too. Being here is about reclaiming my Muslim identity and being able to construct it in a way that resonates in my soul.”

Extrapolating from her experiences in Southern Africa, Mohamed thinks too many leaders on the continent use LGBTI people — including intersex people in the acronym — as “punching bags and scapegoats” to distract the public from government “failures in being able to provide people with basic rights.” She accuses some religious leaders of doing much the same.

“Religious fundamentalists use the LGBTI issue not only to gain favor with politicians, but also to push their own hate agenda,” she said. “While we’ve made huge progress in advancing LGBTI rights, we still have a way to go, especially with regards to religion and the role it plays.”

The Inner Circle began as a group of 25 gay men before expanding its mission to include LGBT-identifying Muslims and eventually adopting the more inclusive term “queer” to describe the population it predominantly serves. Hendricks now wonders whether such labels suit the group’s mission.

“Sometimes labels can be politically useful, but they can also create divisions,” Hendricks said.

“I don’t really identify as gay. I’m just a man who happens to be in love with another man. I’m a multiplicity of complexities and a vast ocean of possibilities. God created me, but he ain’t finished with me yet.”

After 20 years of spiritual activism and 14 annual retreats, The Inner Circle is far from finished with building its movement toward an all-inclusive and compassion-centered Islam.

Amazigh said he plans to return to Algeria with new tools and a global support network to help expand his organization Collective Mahabba, which means spiritual love in Arabic.

“In the Algerian context, it’s not just a matter of sexual orientation and gender identity we’re dealing with. Even heterosexual communities are struggling with love and sexual expression,” he said. “Discussing these issues is new to a lot of people and very strange. We’re hearing a lot of hate speech on behalf of Islam. We need to start building love speech across spiritual lines.”