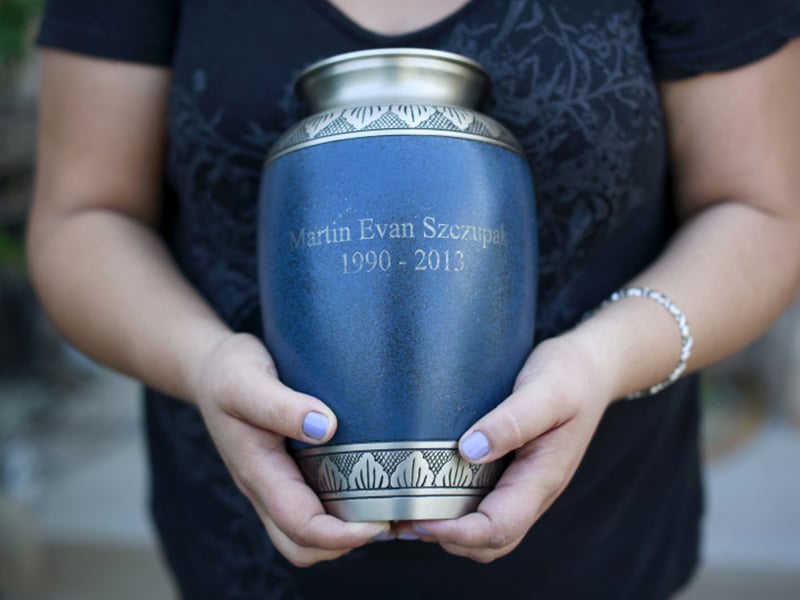 Inez Szczupak holds an urn filled with the ashes of her son Martin, who died of a drug overdose, outside her home in the Staten Island borough of New York on Aug. 19, 2015. Photo courtesy of REUTERS/Shannon Stapleton *Editors: This photo may only be republished with RNS-VATICAN-CREMATION, originally transmitted on Oct. 25, 2016.

VATICAN CITY (RNS) Catholics can be cremated under certain conditions, the Vatican has said, but loved ones should not scatter the ashes at sea or on land or into the wind, nor should they keep them in mementos or jewelry.

Instead, say new guidelines released Tuesday (Oct. 25), the remains should be stored “in a sacred place” that “prevents the faithful departed from being forgotten” and “prevents any unfitting or superstitious practices.”

The guidelines, issued by the Vatican body responsible for doctrine, came in response not only to the growing popularity of cremation in countries such as the U.S. but also the increasingly common practice of disposing of “cremains” at a spot beloved by the deceased person — or just keeping them on the mantel.

The Catholic Church had long forbidden cremation, seeing it as a rejection of the belief in the resurrection of the body and as failing to give due reverence to the corpse. In 1963, the Vatican allowed for the practice under certain conditions.

The new document reaffirms that exemption, noting that cremation does not affect the soul nor does it impede God’s power to resurrect any body.

But the instructions stressed the church’s preference for traditional burials in response to the rising cremation rate and “new ideas contrary to the faith” that have “become widespread.” 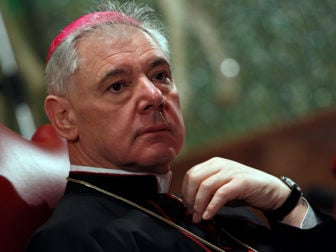 Cardinal Gerhard Mueller, then German bishop of the Regensburg, looks on during a religious conference at the Vatican March 11, 2010. Photo courtesy of Reuters/Tony Gentile *Editors: This photo may only be republished with RNS-VATICAN-CREMATION, originally transmitted on Oct. 25, 2016.

Cardinal Gerhard Mueller, who heads the Congregation for the Doctrine of the Faith, said the new guidelines were necessary because there had been a “relentless increase in the choice of cremation” in many countries.

“It can reasonably be expected in the near future cremation will be considered the normal practice,” Mueller said at a news conference.

The church, the guidelines say, cannot “condone attitudes or permit rites that involve erroneous ideas about death, such as considering death as the definitive annihilation of the person, or the moment of fusion with Mother Nature or the universe, or as a stage in the cycle of regeneration, or as the definitive liberation from the ‘prison’ of the body.”

A person who chooses cremation explicitly as a denial of the belief in the resurrection must be denied a church funeral, the Vatican said.

Even in the case of an approved cremation, the guidelines continued, the ashes must “not be divided among various family members.”

And in order to avoid “the very appearance of pantheism, naturalism or nihilism,” it is not permitted to scatter the ashes “in the air, on land, at sea or in some other way, nor may they be preserved in mementos, pieces of jewelry or other objects.”

Cremation rates have been spiking in the U.S., among Catholics as well as others, in part because it is difficult to find cemetery space near populated areas.

Also, people often retire to states far from their families but prefer to have their funeral in their home parish when they die. But flying a body back can be prohibitively expensive.

Catholic cemeteries have increasingly been offering columbariums — after the Latin word for pigeon or dove, because they resemble a dovecote — to store urns with ashes in a holy spot that loved ones can visit.

The new instructions, which Pope Francis approved last March, were published just ahead of All Souls Day, Nov. 2, when believers honor and pray for the dead in a special way.