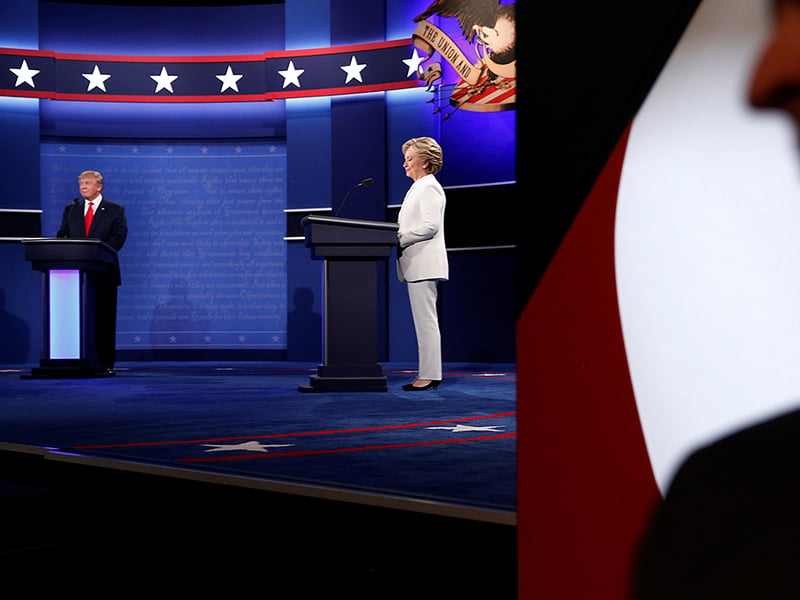 (RNS) Hemant Mehta doesn't want a president who thinks evolution is a hoax.

"If I wanted to hear people whose best evidence for their belief is, 'Well, some people have said,' then I'd go to church."

So, Mehta, best known as "The Friendly Atheist" on his popular blog, will vote for Hillary Clinton -- and he spends more than seven minutes trying to persuade other atheists to do the same because, he believes, she -- a lifelong Methodist -- is the only candidate who shares their core values of separation of church and state, LGBT equality and science-based education.

Mehta's video, which has attracted more than 22,000 views and almost 1,300 comments since it was posted on Oct. 18, is the latest salvo in the battle for the so-called atheist vote as prominent atheists such as best-selling author Sam Harris, scholar Robert M. Price and more take to the internet and social media to persuade their fellow nonbelievers to vote with them.

And it highlights the predicament many atheists will find themselves in on Nov. 8: Should they vote for Donald Trump, the candidate who seems to have only a passing relationship with religion, despite his selection of evangelical Mike Pence as his second, or should they vote for Clinton, who says she reads the Bible and prays daily and who chose Tim Kaine, a Jesuit-educated Catholic, as her running mate?

For some, the choice is not clear. Clinton-Kaine may be the more personally religious ticket, but Trump-Pence is more cozy with the religious right, aka the evil empire among atheists. Then there's Green Party candidate Jill Stein, who has no chance of victory but is the only candidate who reached out to nonbelievers and asked for their vote.

So what's an atheist to do? Historically, they have voted Democratic and liberal -- a new poll by the Public Religion Research Institute and RNS found the religiously unaffiliated preferred Clinton to Trump by a ratio of 2-to-1  -- but they tend to be independents.

And while most voted for Barack Obama and Al Gore, politically conservative atheists tend to vote Republican and have made themselves heard in the general din of this election. Leaders of atheist and secular organizations with political agendas know they ignore them at their peril.

"Atheists are very diverse in their political beliefs and, frankly, I think we have to recognize that we are not just a movement made up of liberal Democrats," said Larry Decker, executive director of Secular Coalition for America, a lobby that represents more than a dozen atheist, humanist and secular groups. "There are atheists who care about the Republican Party and they want change and for whatever reason they believe Donald Trump can make that change."

Jillian Becker is one of those atheists. She and her colleagues at The Atheist Conservative blog highlight reasons atheists should vote for Trump -- immigration reform, tax reform and his disbelief in climate change are among them. His religion -- or lack thereof -- plays no part.

"Trump’s success -- which we ardently hope for -- has nothing to do with it being 'good for atheists,'” Becker said in an email. "Atheists have no common interests. There is no such thing, in fact, as 'atheists’ interests' except in those countries -- mostly Islamic -- where atheism is punishable by imprisonment, torture, and death."

The Atheist Conservative has more than 10,000 followers, but Becker believes that is growing. "We believe that there are millions more out there who are both atheist and conservative," she said. "So I would guess that many voters who are secular-minded, rational, and against the horror of the Clinton mafia coming to power, will be voting for Donald Trump."

Price is another conservative atheist, and he, too, has promoted Trump. In an Oct. 3 interview on Mehta's own blog, which attracts more than 1 million readers each month, Price touted Trump as "bold" and "tough." In a comment echoed by other atheist conservatives, he said he has "no problem" with Trump's promise to repeal the Johnson Amendment, which prevents clergy from politicking in the pulpit.

"I think the doctrine of church-state separation has been redefined to mean that religion must be scrubbed from the public square," Price said in the interview. "This is a suppression of religious freedom. Trump is right to oppose it."

This is what stumps other atheists, like Mehta, who support Clinton. He made his video partly in reaction to Price's interview and a three-minute pro-Trump speech made by T.J. Kirk to his YouTube channel, "The Amazing Atheist," which has 1 million subscribers.

Reaction to Mehta's  video has been as divided as the country, with many of his atheist readers describing him as a "shill" and a "tool" for his support of Clinton.

"I want a president who respects church-state separation and puts logic and reason above dogma and religious thinking," Mehta said in a phone interview. "I don’t care that Hillary Clinton is a Methodist or Tim Kaine is a Catholic because they understand church-state separation, and I would much rather have them in office than an atheist in name only who is basically a pawn of the religious right. That doesn’t help atheists at all and it is bad for our country."