Then there’s “Room,” her 2010 novel that was shortlisted for the Man Booker Prize. It told the story of Ma, a kidnapping victim shut away in a tiny shed with her young son. It became a 2015 film for which Donoghue wrote the Oscar-nominated screenplay.

Now, Donoghue, 47, has written “The Wonder,” a story based on “fasting girls” — a crop of pre-adolescent Victorians, some of them religiously motivated, who seemed to survive for months or years on no food and little water. Some were revealed as frauds, some gave up their fast, while others wasted away while family, friends, doctors and clergy watched. 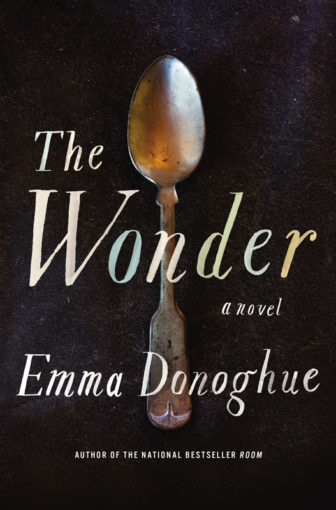 “The Wonder,” by Emma Donoghue. Photo courtesy of Little, Brown and Co.

“The Wonder” fictionalizes the latter, though the plot is not as simple as any of the real-life dramas it is based on. Set in post-famine Ireland, “The Wonder” spins out the drama between Anna O’Donnell, a devout Catholic child who believes she is surviving on “manna from heaven,” and her nurse-turned-guard, Lib Wright, who has no use for religion.

Steph Cha of USA Today called the book “a rich Irish bog of religion and duty and morality and truth,” while author Stephen King said in The New York Times Book Review, “Donoghue’s grave consideration of the damage religion can do when it crosses the line into superstition lifts that narrative rather than weighing it down.”

Donoghue, who was raised in Ireland but lives in Canada, first encountered fasting girls 20 years ago when she was working on her doctorate. She was particularly struck by the story of Sarah Jacob, a 12-year-old Welsh girl who died quickly after doctors and nurses began watching her around the clock. Her parents were convicted of manslaughter and sent to prison.

“I was struck by the horror of all these well-intentioned people wanting to know the truth who ended up killing her,” said Donoghue before giving a sold-out reading recently of “The Wonder” at a bookstore in San Rafael. “I was also struck by the weird fact that while she was being watched nobody said stop, this is evil, and as soon as she died people started throwing blame in every direction. It is as if people were paralyzed by their fascination with the case. It was like some terrible reality television situation.” 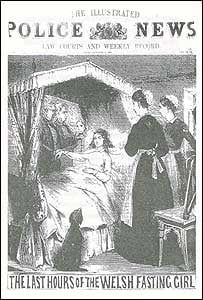 Some social historians have linked fasting girls to anorexia nervosa, exerting control over their own bodies in a culture that otherwise gave them little control.

“Many young women wanted to be pure and live an ascetic life without any of the appetites of the flesh,” social historian Joan Jacobs Brumberg writes in “Fasting Girls: The History of Anorexia Nervosa.”  “The so-called fasting girls were still considered by many to have miraculous powers. The public discussion of these cases revealed the staying power of traditional piety and belief.”

But Donoghue couldn’t find a way into the story through one real case — her usual method of approaching historical fiction — so she shelved the idea. Then she realized combining elements of several cases — the religious passion of one fasting girl, the family involvement of another — would allow her to explore questions of fervent faith and cool reason, religion and of science and the extent to which love of family and of God can drive someone.

“The Wonder” is Donoghue’s ninth novel, but it is her first to deal so centrally with religion. It is, she said, a subject she is both fascinated by and wary of.

“It’s like bringing an instrument into your music that you know some people will be deaf to,” she said. “But I hoped that if I made the movement between Anna and Lib sufficiently dramatic, with a lot of sympathy on both sides, there would be no character the readers would be cold to.”

Religion, she continued, is a rich mine for writers because “it allows your characters to have entirely different worldviews from each other. There is no overlap. It’s as if one of your characters can see a mountain in the distance and the other says, ‘Where? I see no mountain.’ That always creates a sort of electrical charge.”

But that does not extend to talking about her own faith. She is religious, she said, but doesn’t speak publicly about it the way the novelist Marilynne Robinson and writer Anne Lamott do.

“I think some writers talk about their faith very eloquently and they become, effectively, spokespeople, religious people who talk about it to the world, but I really don’t,” she said. “I am religious and I practice but I don’t talk about it.”

Donoghue’s next book will be a novel for middle-grade children — she and her partner of 22 years have two, a boy, 12, and a girl, 9. Then she is working on a contemporary novel set in France. Asked if there would be any religion in it, she paused, then grinned and said, “There’s always a little bit of religion.”