The Rev. Benedict Nivakoff says Mass in September 2016. Photo courtesy of the Monks of Norcia

ROME (RNS) When the earth shook and the walls came tumbling down in Norcia earlier this week, the Benedictine monks who live in the picturesque central Italian town somehow survived without a scratch.

But their historic basilica and monastery, built above the birthplace of St. Benedict, collapsed after a 6.6 magnitude earthquake struck the medieval town 100 miles north of Rome on Sunday (Oct. 30).

“God prepared us for this,” said the Rev. Benedict Nivakoff, an American monk from Connecticut who has lived in Norcia for 15 years and is the subprior of the community. “No one was hurt.” 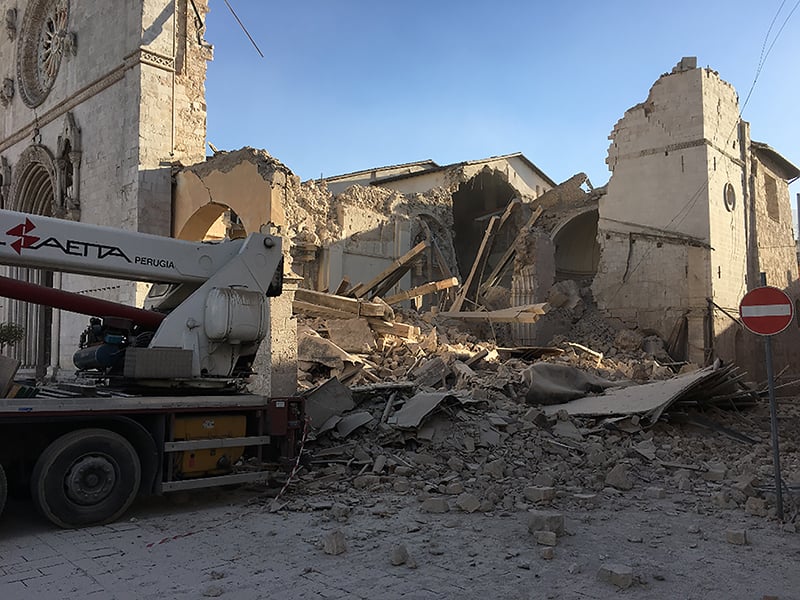 The Basilica in Norcia lies in ruins after the earthquake on Oct. 30, 2016. Photo courtesy of the Monks of Norcia

Now the town’s 16 Benedictine monks, including 12 Americans, have launched an ambitious fund-raising campaign called “Deep Roots” to rebuild both the 14th-century basilica and monastery – and breathe new life into Norcia.

The monks had already been planning to raise money for needed repairs and restorations, with an initial goal of $7.5 million.

But that was before Sunday’s devastating quake – the most serious to hit Italy in 36 years – and the figure will now be much higher.

“Is this the end of the book or the beginning of a new chapter? We want to make this a new chapter,” Nivakoff told Religion News Service.

“We have to help rebuild the town on spiritual principles and give people something to hang on to.”

The monks’ goal has already drawn the support of billionaire cashmere manufacturer Brunello Cucinelli, who lives in Solomeo, another medieval hilltown 90 miles away.

“I want to stay close to my dear monks, I will help them with sustenance and the monastery’s reconstruction,” Cucinelli told the Italian daily La Repubblica. “Their presence has brought back spirituality to this town.”

Norcia — also known by its Latin name, Nursia — is known around the world for its black truffles, wild boar sausages and layers of history dating back to the Roman Empire.

Now Norcia is a virtual ghost town, and the powerful earthquakes that shook the region in the past two months have left a staggering 22,000 people homeless. For the monks the loss of the basilica was devastating.

Its most famous native son, however, remains St. Benedict. The son of a Roman noble, he was born around the year 480 and went on to establish monasteries under the Rule of Benedict and become known as the founder of Western monasticism.

Norcia’s own Benedictine monastery was active from the 10th century until the congregation was suppressed under Napoleon 200 years ago. The monks returned in 1998 and built a brewing business exporting beer to the U.S.

Now Norcia is a virtual ghost town, and the powerful earthquakes that shook the region in the past two months have left a staggering 22,000 people homeless. For the monks the loss of the basilica was devastating.

“It is a bit like when a loved one dies, you don’t realize the loss at first,” Nivakoff said. “The basilica lasted more than 1,000 years. It feels like the end of an age.”

Many people had already been evacuated from the area after a string of earthquakes, including the 6.2 quake on Aug. 24 that killed nearly 300.

“With the series of quakes, little by little we evacuated people and almost everyone was gone when it happened,” said Nivakoff, referring to the Oct. 30 earthquake.

“Four of the priests went around the town trying to give people the last rites. We had to force people out of their homes. Every church in Norcia is on the ground.”

The Benedictine monks devote themselves to a life of simplicity, prayer and Gregorian chants. In 2015 their Gregorian chant CD was a top seller after it debuted at No. 1 on the Billboard classical music chart, and their brewing business has also attracted international attention.

For now the monks have moved to another monastery, which they are restoring outside Norcia, and their beer production has been suspended as they try to work out what comes next.

The Rev. Cassian Folsom, the Benedictine prior, said: “When misfortunes happen and tragedies take place, that doesn’t mean that God has abandoned us. It means that he is teaching us something.

“It will be very costly and it will take a long time to do the repairs, but monks are accustomed to rolling up their sleeves and getting to work,” Folsom said in a video on the monks’ website.