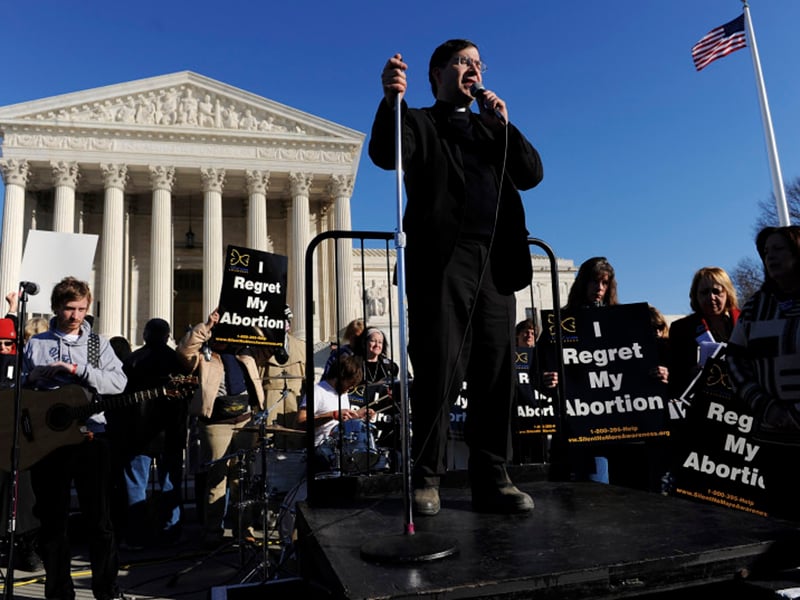 Rev. Frank Pavone, National Director of Priests for Life, leads a prayer during the March for Life anti-abortion rally in front of the US Supreme Court building in Washington, on January 22, 2009. Photo courtesy of REUTERS/Jonathan Ernst
November 8, 2016
David Gibson

NEW YORK (RNS) After sparking outrage for posing with an aborted fetus on an altar in a video urging voters to elect Donald Trump, a Catholic priest says he does not believe he'll be disciplined by church authorities and has no regrets.

In the video and the accompanying post, which have been viewed more than 360,000 times so far, Pavone stands over the small, curled fetus and talks about why voters must support Trump; Pavone is a member of the Republican nominee’s faith advisory team.

The Rev. Frank Pavone, national director of Priests for Life, leads a prayer during a March for Life anti-abortion rally in front of the U.S. Supreme Court building in Washington on Jan. 22, 2009. Photo courtesy of REUTERS/Jonathan Ernst

The video went viral and prompted numerous critiques, many from Catholics who oppose abortion, who said that Pavone – a controversial figure in the anti-abortion movement and in the Catholic Church – was defiling a human life and a sacred place.

“A human being has been sacrificed and the altar of God has been desecrated, all for politics,” Ed Mechmann, director of public policy for the Archdiocese of New York, wrote in a blistering blog post. “Everyone who respects the dignity of every human person should reject and disavow this atrocity.”

Other commentators also blasted Pavone for “a profane violation,” as the Rev. Thomas Petri, vice president and academic dean of the Pontifical Faculty of the Immaculate Conception in Washington, D.C., told Catholic News Agency.

Speaking to RNS, Pavone rejected the criticisms and said he had not violated any canon laws.

“I laugh at that, I really do,” Pavone said. “If anybody thinks these people are not going to complain if I put this baby on a regular wood table instead of an altar, they’re crazy. They’re complaining because I am putting Hillary Clinton in a bad light. That’s what’s going on here. It’s completely partisan.”

He said he used the altar in a chapel at the Staten Island building that houses Priests for Life offices. He said the videotaping was not done during a service of any kind; he was alone, put the fetus on the altar, set up his iPhone on a stand and started filming.

Pavone insisted that the fetus was treated with proper respect. He said the remains were originally given to a Protestant pastor he knows by a local pathologist who said they were the result of an abortion and who asked that they be given a proper burial. Pavone and Priests for Life are known for offering such services.

The pastor brought the remains to Pavone, who made the videotape and then presided over a funeral for them, before burial. He did not identify the pastor or pathologist – it is unclear whether laws regarding the disposal of human remains were violated – and did not say where the burial took place.

“I don’t have control over the baby or what was done,” Pavone said. He said there was no possibility of contacting the mother for permission to use the fetus because “the mother had the baby killed. So she’s not going to be interested in the least in giving permission.”

“I think it’s silly for people to be even making those distinctions. What do you do when you’re in the middle of a holocaust and you’re showing people a body that they deny even exists?

“The dishonor, the sacrilege, the mistreatment, the abuse, the manipulation – that’s all on the shoulders of the abortion industry and, my point in making this video, on the shoulders of Hillary Clinton and the Democratic Party and those who support abortion in our political world,” Pavone said. “They’re the ones who are mistreating and abusing and degrading these babies.”

Pavone said he does not expect to face any disciplinary action from either the Archdiocese of New York, which gives him permission to act as a priest in the confines of the archdiocese, or the Diocese of Amarillo in Texas.

That’s where Pavone relocated in 2005 when he clashed with then-Cardinal Edward Egan of New York. Pavone continued to clash with the bishop in Amarillo, however, but was finally declared back in the church's good graces and allowed to continue his work back up in New York in 2012.

Then, in December 2014, the current New York archbishop, Cardinal Timothy Dolan, cut ties with Pavone after growing frustrated with his ongoing refusal to be transparent about the organization or to cooperate with the archdiocese.

But Pavone said he is frustrated that he has been criticized by church officials over this video.

He said he is “in dialogue” with some bishops who have contacted him privately but said the public criticisms show that church authorities are not passionate about the abortion issue and are quietly favoring Clinton.

“The fact that these people are complaining makes me laugh and wonder what planet they’re living on,” he said, adding: “OK, so we don’t judge the homosexuals but we sure judge the pro-life priests! Pounce right on them.”

Trump’s candidacy has divided abortion opponents much as it has other traditional Republican allies.

Some argue vociferously that Trump’s conversion to the cause is sincere or that his pledge to appoint abortion opponents to the Supreme Court is more than enough justification for voting for a candidate who is so flawed in other ways.

Others say that Trump’s pro-life pledges cannot be trusted and that voting for someone who is so morally compromised in other areas actually undermines the witness of abortion opponents and people of faith.