RALEIGH, N.C. (RNS) On the day after the election, Mervat Aqqad’s 7-year-old son woke up and asked who got elected president.

When Aqqad broke the news to Ibrahim, a second-grader at the Al-Iman School in Raleigh, his first question was, “Do we have to move now?”

“I told him, ‘You were born here. You’re an American citizen like anyone else,’” said Aqqad, a Raleigh middle school teacher. “I had to explain to him the difference between legal and illegal.”

Such was the reality in hundreds of Muslim homes in Raleigh and across the nation as parents tried to comfort their children and to calm their own fears in the wake of Donald’s Trump’s election.

The Republican candidate, who proposed banning Muslims from entering the United States, monitoring mosques and torturing terrorism suspects is now the president-elect, and for many American Muslims that’s an uncomfortable reality.

As they gathered at the Islamic Association of Raleigh mosque for one of three Friday (Nov. 11) prayer shifts, they talked of the need to know their rights, remain vigilant and take extra precautions to guard their loved ones.

Across the country, from the All Dulles Area Muslim Society in Sterling, Va., to the Islamic Association of Greater Detroit in Rochester Hills, Mich., Muslims are coming together for town hall meetings and prayers to talk about the election and figure out a path forward with a president-elect they fear doesn’t share their best interests.

“There was a denial among Muslims that Trump would be able to win,” said Manzoor Cheema, a Raleigh activist and coordinator for Muslims for Social Justice, a statewide group. “Now many Muslims are realizing their civic duty doesn’t end with voting.”

Most people who identify with faiths other than Christianity favored Hillary Clinton, but exit polls did not track the Muslim vote because at 1 percent of the U.S. population they are not a large enough group. Raleigh, Durham and Chapel Hill, the three communities that form the Triangle region, all favored Clinton.

But while Muslims here expressed shock and disappointment at Trump’s election, they were neither panic-stricken nor despondent. Mostly they spoke of the need to build stronger coalitions with fellow minorities, whether Latinos, African-Americans, immigrants and members of other minority faiths.

Luba Ahmad-Rufai, a 28-year-old activist who serves as vice president of Triangle Muslim Aid, a relief organization, said Trump’s election was not going to steer her off course.

“For me, I’m focusing on continuing our work and building bridges in the community through service,” she said as she stood behind a sign-up table on the mosque’s second floor, selling tickets for her organization’s fall gala next weekend. 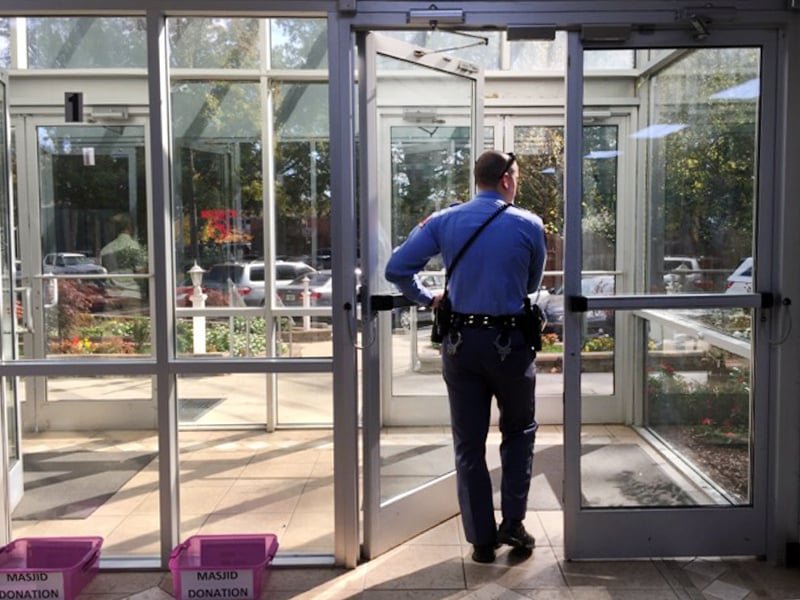 Following the slaying of three students of their faith in nearby Chapel Hill last year, Muslims here are battle-hardened and better prepared. The shooting in the usually harmonious university town became part of a larger narrative of hate crimes against Muslims.

In its wake, local Muslims formed new alliances with non-Muslims and redoubled their efforts to play a bigger role in civic life, through multiple civil rights and charity organizations formed to continue the work of Deah Barakat and his wife Yusor Abu-Salha, two of the shooting victims who spent much of their lives giving back to those less fortunate.

“In this community we’ve gone through such a huge sacrifice,” said Fiaz Fareed, a Raleigh Muslim who works as a nuclear medicine technologist at WakeMed, a local hospital. “How much worse can it get?”

Fareed said the shooting strengthened the Muslim community and, in a strange way, gave it hope for a better future.

While speakers at Friday services spoke of not giving in to fear, many Muslims said they have received lots of encouragement from the community.

Rashid Salahat said his wife was greeted with hugs at the local gym on the day after the election, and his own customers at the Subway sandwich shop he runs in downtown Raleigh went out of their way to say, “If anything bothers you, you let me know.”

Members of this community know that slights, name-calling and finger-pointing will continue. In many ways they are used to it.

Jamil Qurneh, a Raleigh businessman, recalled a scene at the pool during family vacation at a Myrtle Beach, S.C. resort this summer in which a distraught mother pulled her son away from his children saying, “You can’t play with these kinds of people.”

But, Qurneh, who felt the election was the ugliest in the 35 years he has lived in the U.S., added, “We’re praying. And hoping for the best.”