(RNS) On Saturday (Nov. 19) at the Vatican, Pope Francis will officially name – or “create,” as the Catholic Church prefers to say – 17 new cardinals.

Three are from the U.S. – the first Americans Francis has named to the College of Cardinals – and 13 are under 80 years old and thus eligible to vote if a conclave were called to elect a successor to Francis.

The figure of the cardinal, with his scarlet robes and unique role in choosing a pope, is one of the most distinctive in Roman Catholicism. But what is a cardinal anyway? Where did cardinals come from? Let us ’Splain …

The office and title of “cardinal” are not mentioned in the New Testament but instead arose some 1,500 years ago when priests and deacons staffed about 25 or 30 parishes (called “tituli”) in Rome, which was surrounded by seven very small dioceses in the city’s suburbs. Each diocese was headed by a bishop. These three dozen or so bishops, priests and deacons joined the pope to be collectively called “the Roman church.” They became the first cardinals.

As the papacy developed into a medieval monarchy with a larger bureaucracy, it was only natural that these closest papal advisers evolved into a more formal structure with unique titles, offices and insignia.

Pope Urban II (whose papacy was 1088-1099) modeled his Curia after English and French royal courts and councils, and cardinals increasingly filled the roles of papal ambassadors or legates.

They gathered around the pope as a group of advisers, like a Cabinet or the Roman Senate. Some cardinals asserted they shared in the power of the papacy — the Latin phrase is pars corporis papae, “part of the pope’s body.” We see medieval popes signing documents with cardinals as witnesses and stressing that they made decisions de fratrum nostrum consilio (“with the advice of our brothers”).

Some cardinals were sent to speak for the pope to recalcitrant bishops, abbots or secular rulers; they were called “papal vicars” and were permitted to wear papal symbols and vestments. 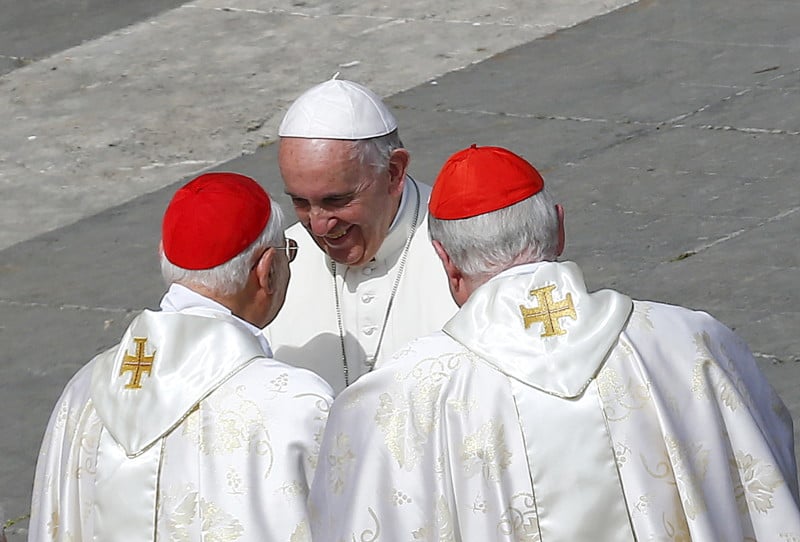 Pope Francis greets cardinals at the end of a Jubilee Mass in St. Peter’s Square at the Vatican, April 3, 2016. Photo courtesy of Reuters/Tony Gentile *Editors: This photo may only be republished with RNS-CARDINAL-EXPLAIN, originally transmitted on Nov. 15, 2016.

The pope — on his own authority alone. There is a saying: “Only God can create the world and only a pope can create a cardinal.”

What does the word “cardinal” mean?

Some say it comes from the Latin word “cardo” (or “hinge”), indicating the cardinals’ role sitting between the church’s head (the papacy) and her body (the people of God). Others think it comes from the word “cardinalis” because a new cardinal is officially made part of the Roman church (“incardinated”).

For instance, strictly speaking, Archbishop Joseph Tobin won’t become the cardinal of Newark, N.J. Cardinals hold the formal title of cardinal of the Roman church and are assigned a titular (“in name only”) church there — linking them to the tradition of the original cardinals as heads of Roman parishes or suburban dioceses. 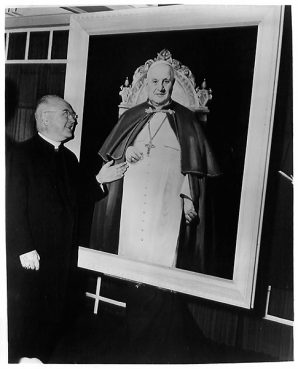 Cardinal Francis Spellman (archbishop of New York from 1939-1967) was assigned the rundown Church of Sts. John and Paul, likely because he could call his friends the Kennedy family from his native Boston to fund a major renovation — which is exactly what he did.

Why do they wear red?

Red symbolizes the cardinal’s willingness to die for the faith.

This meaning is inserted into the ceremony during which a cardinal wears his red robes for the first time. As the pope places a red hat, called a biretta, on the new cardinal’s head for the first time, the pope says: “[This is] scarlet as a sign of the dignity of the cardinalate, signifying your readiness to act with courage, even to the shedding of your blood, for the increase of the Christian faith, for the peace and tranquility of the people of God, and for the freedom and growth of the Holy Roman Church.”

It seems that red became the cardinal’s color in the Middle Ages. Some earlier paintings, frescoes and manuscripts indicate blue may have been used in prior centuries to set cardinals, or maybe bishops, apart.

Why do they say someone gets “a red hat” when he’s made a cardinal?

Cardinals — who are almost always bishops but sometimes simply priests — used to receive three red hats, but now there are only two. The first, and the one used far more than the others, is a red skullcap, called a zucchetto by those in the know and a beanie by those who aren’t. 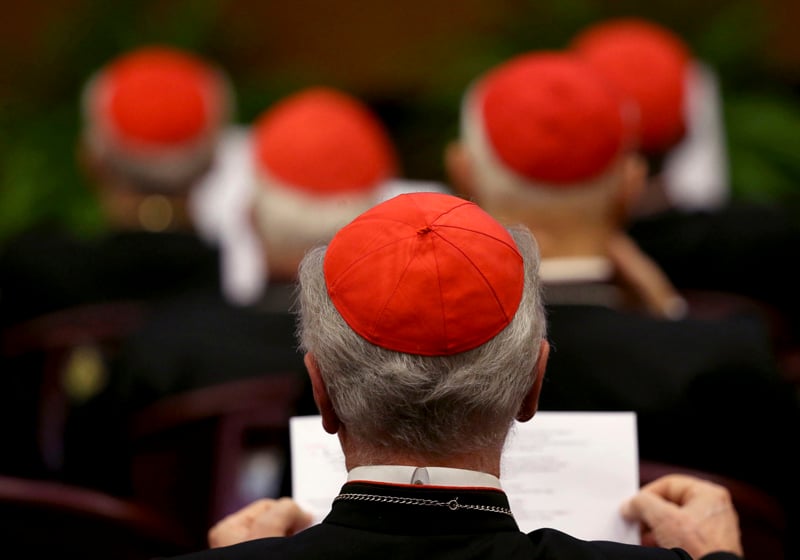 Cardinals attend a consistory led by Pope Francis as he names 20 new cardinals at the Vatican on Feb. 12, 2015. Photo courtesy of Reuters/Alessandro Bianchi *Editors: This photo may only be republished with RNS-CARDINAL-EXPLAIN, originally transmitted on Nov. 15, 2016.

It was originally nothing more than a covering for the cleric’s tonsure: a patch of skull shaved of its hair to denote the clergyman’s dedication to a life of service. (Monks wore black or brown zucchetti.)

The second hat is the biretta: a stiff cap covered in scarlet silk with four sides and three ridges to form a peak, which is carried more often than worn and which you might see a cardinal holding in his official portrait. The biretta likely evolved as part of the medieval university’s robes, hoods and hats that not only denoted a scholar’s rank, but kept him warm in drafty classrooms and libraries. 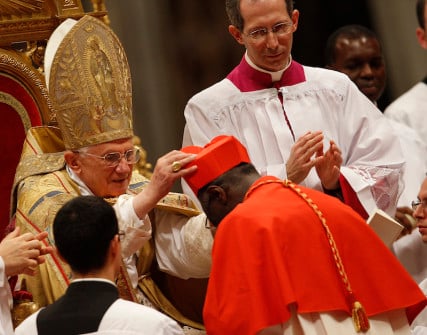 New cardinal Robert Sarah of Guinea receives the red biretta, a four-cornered hat, from Pope Benedict XVI during the consistory ceremony in St. Peter’s Basilica at the Vatican on Nov. 20, 2010. Photo courtesy of REUTERS/Tony Gentile *Editors: This photo may only be republished with RNS-CARDINAL-EXPLAIN, originally transmitted on Nov. 15, 2016.

The third hat of former times was a broad-brimmed galero that looked like a stiff sombrero. The galero was left aside in 1969 as part of a post-Vatican II downsizing of church pageantry. In practice (after the Middle Ages when it was a reasonable size), the galero was never really worn because it was huge — think of a round kitchen table for a breakfast nook.

During the consistory, the galero was held over the new cardinal’s head, then often carried in procession the first time he returned to his home cathedral. Look up at a cathedral that was home to a cardinal and you will probably see the galero suspended over a crypt or tomb where cardinals are buried. After their deaths, the cardinals’ galeros are hoisted up to hang from the ceiling, draped by many tassels that signify their particular titles and ranks.

Are all cardinals bishops?

Current canon law stipulates that all cardinals are supposed to be bishops, which is what John XXIII had declared in 1962. On the rare occasions when a pope names a priest who is not a bishop to the College of Cardinals, the pope will leave it up to that new cardinal to decide if he wishes to be ordained a bishop. Typically, the priest is a leading theologian, already older than 80 and ineligible to vote in conclave. He usually asks the pope to overlook the requirement that he be ordained a bishop, a request the pope then grants. To give an American example, this is what happened  in 2001 when John Paul II gave a red hat to the 82-year-old Jesuit theologian Avery Dulles.

What do cardinals do?

Apart from acting as top advisers, the cardinals have only one job: to elect the pope. For the church’s first millennium, it was the local Roman clergy (and sometimes laypeople) who chose the bishop of Rome. Cardinals got the leading role in electing the pope in 1059 but not the exclusive right to do so until 1179. The conclave (from the Latin for “with a key”) that locks the cardinals up until they choose the pope didn’t appear until 1274. 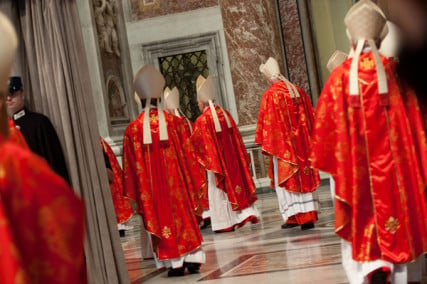 For more than half of the church’s life, there were just a handful or less than 20 cardinals.

As the medieval papacy expanded the role and use of the College of Cardinals, the number rose to 24 or sometimes as many as 40 or 70 — at least as a goal. Pope John XXIII (whose papacy was 1958-1963), never a man bound by tradition, saw the number 70 as impractical for the modern world and a growing church: By 1962, after he named a new batch of cardinals, there were 87.

Paul VI (1963-1978) set the number of cardinal electors at 120 but also stipulated that once a cardinal turned 80 years old he could not enter a conclave to vote for a pope. St. John Paul II reaffirmed his predecessor’s limit and then simply ignored it: At one point, there were 135 eligible electors during his papacy.

To give another sense of the unprecedented growth of the College of Cardinals in the last half-century: Fifty-one cardinals elected John XXIII in 1958, then just five years later 80 cardinals elected Paul VI, while nearly the full 120 voted in the past few conclaves. 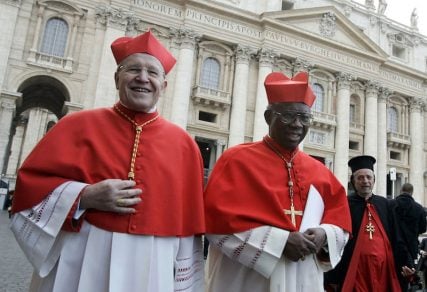 Cardinal Walter Kasper, left, leaves St. Peter’s Basilica with Nigerian Cardinal Francis Arinze and Syrian Cardinal Daoud Ignace Moussa I after viewing the body of St. John Paul II lying in state in 2005. Photo by Tony Gentile/Reuters *Editors: This photo may only be republished with RNS-CARDINAL-EXPLAIN, originally transmitted on Nov. 15, 2016.

Apart from the number of cardinals, a distinguishing characteristic of the modern college is its geographic diversity.

Since the Middle Ages, both the papacy and the College of Cardinals have usually been dominated by Italians and Italian politics. It was Paul VI in the 1960s who made the college ever more international to reflect a growing church that, because it was truly global, was indeed “catholic,” or universal.

Pope Francis is making the college even more international, less centered in Rome and the Curia, and less predictable: He is bypassing dioceses that used to get a red hat automatically and naming cardinals in far-flung places that never had a cardinal.

For the first time, the college will be less than half European, with more than 40 percent of the cardinals coming from Latin America, Africa and Asia — places where the church is growing.

This is the Global South that gave the church her first Latin American pope. After the next conclave, Francis’ successor might be an equally surprising choice from among this new College of Cardinals.

(Christopher M. Bellitto is professor of history at Kean University in New Jersey. This essay is adapted from his book “101 Questions and Answers on Popes and the Papacy.”  His latest book is “Ageless Wisdom: Lifetime Lessons from the Bible.”)