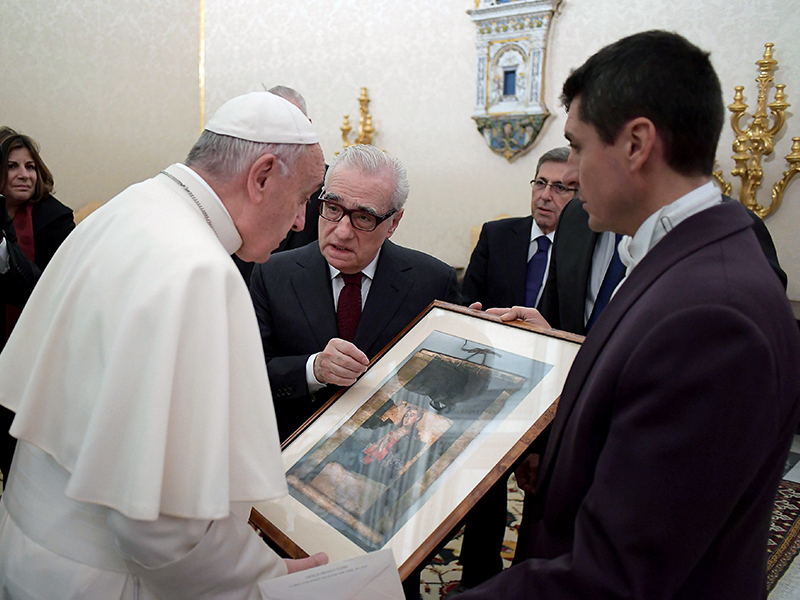 Director Martin Scorsese, center, tells Pope Francis about an image that was used in researching the film "Silence" during a private audience at the Vatican on Nov. 30, 2016. Photo courtesy of Osservatore Romano/Handout via Reuters
December 6, 2016
RNS staff

(USA Today) Director Martin Scorsese said his meeting in Rome with Pope Francis had both emotionally moving and light-hearted moments, with the pope even cracking a joke about getting actor Andrew Garfield to join the priesthood.

Scorsese said he mentioned to the pope, a member of the Jesuit order, that Garfield had gone through the Jesuits' 30 days of spiritual exercises before starting the film.

"And (the pope) said the next thing for Andrew to do is to be ordained," Scorsese recalled, speaking during the first screening of Silence in Los Angeles Sunday (Dec. 4). "And I looked at the pope and said, 'Instead he got me.' And there was a big laugh. And it really loosened up."

Scorsese said a pre-meeting with the papal staff was filled with discussion of protocol and exact instructions of what to say to the pope. When Francis arrived, however, he immediately put everyone at ease.

"He was the most disarming ... everything was fine," said Scorsese. "He was smiling and thanked us for being there." 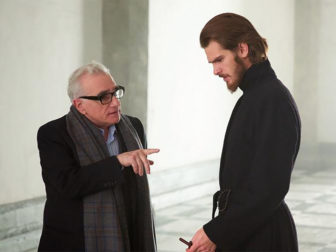 The pope told Scorsese that he had read the 1966 novel on which the film was based by the late Japanese writer Shusaku Endo, a convert to Catholicism.

"( Francis) did say, I hope the story of the film, knowing the book, bears much fruit," Scorsese said.

The film follows the two Jesuit priests in Japan, where Christians were persecuted, as they search for their mentor (played by Liam Neeson). Scorsese gave Francis a copy of a painting of a Madonna by a 17th century Japanese artist that was venerated by the Christians who continued to practice the faith underground.

After meeting the pope, Scorsese attended a screening of Silence in a Vatican chapel. The director said the film was shown on a screen near a large crucifix.

"So the whole film played on this crucifix, it was quite stunning," said Scorsese. "It was quite an experience."