(USA Today) At least 25 people were killed and 35 were injured after a blast near Cairo’s main Coptic Christian Cathedral, according to reports from the Egyptian state-sponsored Middle East News Agency.

MENA reported that around 10 a.m. local time someone threw a bomb into a small chapel attached to the St. Mark’s Cathedral in the Abbassia district, Egypt’s main Coptic church. The attack occurred just days after another bombing in Cairo that killed six policemen.

Photos and video showed shattered windows and deteriorated roofing in the aftermath.

The blast took place as a Sunday Mass being held in the chapel was about to end and coincided with a national holiday in Egypt marking the birth of Islam’s Prophet Muhammad, according to reports.

The last bomb attack, which occurred on a main road leading to the pyramids at Giza, was claimed by a militant group believed to be affiliated with the Muslim Brotherhood.

Egypt’s Coptic Christians, who make up about 10 percent of the country’s population, have complained about discrimination, the BBC reported.

In 2013, four Coptic Christians were killed in religious violence. Mourners went to St. Mark’s cathedral, where many chanted  slogans against Egypt’s Islamist President, Mohammed Morsi. Violence erupted after the service between mourners and local residents, resulting in two deaths. 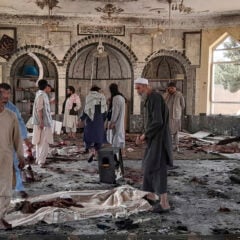 Religion Hub
IS bomber kills 46 inside Afghan mosque, challenges Taliban
Follow us on Facebook!
Submit your photos to RNS