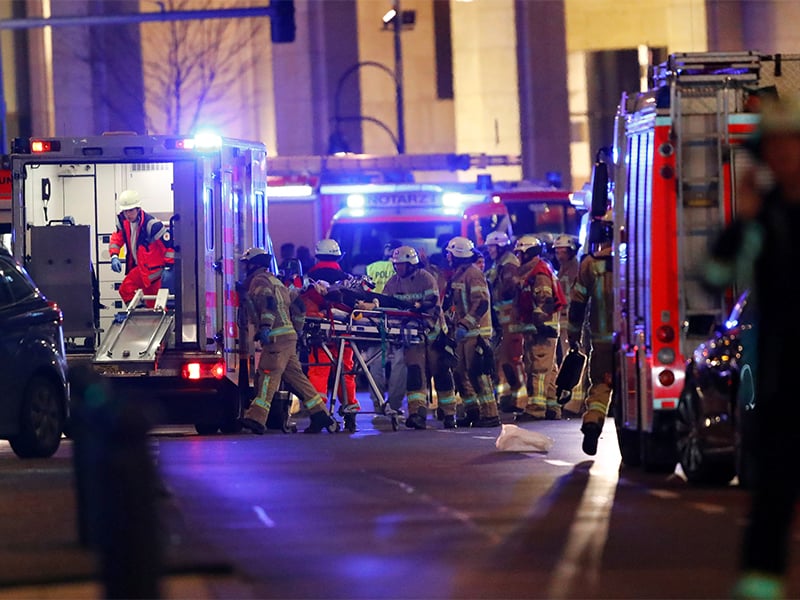 Police and emergency workers move victims to waiting ambulances after an accident at a Christmas market on Breitscheidplatz square in the west of Berlin, Germany, on Dec. 19, 2016. Photo courtesy of Reuters/Fabrizio Bensch
December 19, 2016
RNS staff

BERLIN (USA Today) — A large black truck slammed into a Christmas market in central Berlin, killing at least 12 people and injuring about 50 others in what police said was a deliberate attack.

The carnage happened on Monday (Dec. 19) during an outdoor market near Berlin's Kaiser Wilhelm Memorial Church. A suspect, believed to be the driver, was arrested about a mile away from the scene. A rider in the truck - which bore a Polish license plate - was found mortally wounded in the passenger seat, according to the Associated Press and German media. The passenger died as paramedics treated him.

The Polish owner of the truck said he feared the vehicle, driven by his cousin, may have been hijacked. Ariel Zurawki said he last spoke with the driver around noon, and the driver told him he was in Berlin and scheduled to unload Tuesday morning.

"They must have done something to my driver," he told TVN24.

The scene was laced with chaos. Dozens of ambulances lined up in front of the church as desperate people looked for friends and relatives among the injured. At least one woman could be seen getting treatment in the back of an ambulance. A large Christmas tree with a gold star on top was toppled over nearby in the street.

The attack shattered the pre-Christmas calm in Germany, a time when thousands of locals and tourists spend their early evenings at markets, drinking mulled wine, and eating sausages and pastries. The markets were due to finish on Friday.

It remains too early to determine whether the incident is an act of terror. But U.S. officials suggested that is the most likely explanation.

"The United States condemns in the strongest terms what appears to have been a terrorist attack on a Christmas Market in Berlin, Germany, which has killed and wounded dozens," U.S. National Security Council spokesman Ned Price said in a statement. "We send our thoughts and prayers to the families and loved ones of those killed, just as we wish a speedy recovery to all of those wounded . . . We have been in touch with German officials, and we stand ready to provide assistance as they recover from and investigate this horrific incident."

Donald Trump said the incident smacks of an assault motivated by anti-Christmas sentiment.

"Innocent civilians were murdered in the streets as they prepared to celebrate the Christmas holiday," Trump said. "ISIS and other Islamist terrorists continually slaughter Christians in their communities and places of worship as part of their global jihad. These terrorists and their regional and worldwide networks must be eradicated from the face of the earth, a mission we will carry out with all freedom-loving partners."

Burkard Dregger was at a Christmas party when he heard news of the incident and rushed to the scene.

"It is a terrible thing but we need to keep cool heads and work out what has happened before we draw any conclusions," he said. Dregger is head of security for parliamentarians attached to Chancellor Angela Merkel's ruling CDU party. He was briefed by investigators but they had not yet come to any conclusions and were keeping an open mind about the attacker and motive.

"Happiness and freedom in Germany has been destroyed tonight," Dregger said.

Some survivors took to social media to describe the horror and panic.

"People crushed. I am safe. I am safe," tweeted an apparent witness, Emma Rushton.

Video footage from the scene shows stalls knocked over and people lying injured on the ground.

Truck attacks in Europe have been on government radar screens as possible ways that terrorists might try and carry out simple and cost-effective assaults. In July, 86 people were killed in Nice, France, when a truck slammed into a large crowd during Bastille Day celebrations. The Islamic State claimed responsibility for the attack.

The U.S. State Department issued a warning last month that Americans in Europe should be vigilant to the threat of terrorist attacks during the holiday season. The alert specifically mentioned Christmas markets.

After the Berlin incident , the Chicago Police Department said there was no known threat to the Chicagoland area. Still, the police department said in a statement it was adding foot and bike patrols as well as other specialized units to provide security to Daley Plaza, where the annual German-style Christmas market is being held.