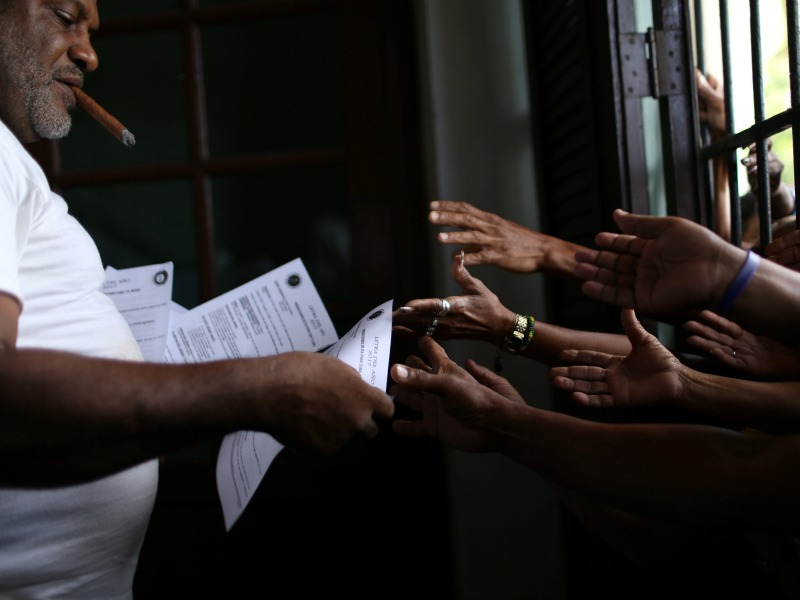 Followers of the Yoruba religion receive a sheet of paper with recommendations based on their annual predictions for the new year, after a news conference Jan. 3, 2017, in Havana. Photo courtesy of Reuters/Alexandre Meneghini
January 4, 2017
RNS staff

HAVANA (Reuters) Priests from Cuba's Afro-Cuban religion forecast a prosperous 2017 in their New Year's prophecy and told Cubans to be hopeful despite the economic and diplomatic headwinds the Caribbean island-nation faces.

The ritual-filled Santeria religion, which fuses ancient African beliefs brought to Cuba by slaves with Catholicism, is practiced by millions of Cubans, many of whom eagerly wait for guidance from its annual forecast.

"This (reading) forecasts a favorable development from the point of view of economic management," priest Lazaro Cuesta, clad in white as a symbol of purity, told a news conference in Havana on Tuesday (Jan. 3).

That forecast contrasted with President Raul Castro's gloomy depiction of the economy last week. He told the National Assembly that Cuba entered a recession last year in tandem with the crisis in Venezuela, a key ally, although the economy might eke out growth in 2017.

It also flew in the face of darker prophecies in recent years. The Santeria priests, known as babalawos, had predicted an explosion in migration and social unrest in 2015 and 2016.

Asked about the future of U.S.-Cuban relations given U.S. President-elect Donald Trump's threat to end the fledgling detente, Cuesta used an image to suggest both sides would continue to negotiate.

Cuesta said the reigning Yoruba deity Oggun, god of iron, tools and weapons, would use his machetes to cut down the plants preventing communication.

"Independently of the instability anyone might feel, of the political happenings in the world, the letter of the year gives the Cuban people, and the world, hope," he said.

"If we are capable of hearing, expressing, understanding, contributing, the results without doubt will arrive."

They advised followers to protect coastal areas from waste and to encourage economic and sociocultural exchanges between countries.

Senior babalawo Bebo Padron said this year's prophecy called for Cubans to unite, possibly a reference to opposition to the country's government and those who have emigrated.

Two of the six slogans for 2017 chosen by the faith were "Only one king governs a people" and "no hat can be more famous than a crown."

Santeria followers have believed their gods were on the side of the Cuban revolution ever since a white dove landed on the shoulder of revolutionary leader Fidel Castro during a victory speech in Havana.