I first encountered Playmobil’s Martin Luther in in my Religion News Association goody bag in Washington last September, courtesy of the German National Tourism Board. To mark the 500th anniversary of the Reformation, here’s Young Dr. Luther, one hand holding the quill with which he wrote his famous translation of the Bible, which he holds in the other. 1821 statue of Luther in Wittenberg by Gottfried Schadow

A couple of months later, I mentioned the toy to Dr. Martin Hauger, an official of the German Lutheran Church, who was in New York for a panel discussion on Luther and Anti-Semitism at the Morgan Library.

Oh yes, Hauger said. The most popular Playmobil figure ever. Modeled on the famous statue of Luther in front of Wittenberg Town Hall.

But, like the statue, controversial. At the bottom of the left-hand page of the open Bible, the Old Testament ends with the word “End.” The New Testament begins on the right-hand page, evidently superseding the Old. 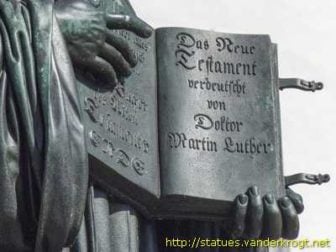 If you take a close look at the original statue, you’ll see that the fuss is not just about the End. Luther’s right hand partially covers the Old Testament as his right forefinger points to the New.

So the Hebrew Bible is finished. The Christian sequel  — “Germaned” (verdeutscht) rather than merely, as Playmobil has it, “translated” (übersetzt) by Dr. Luther — takes over. 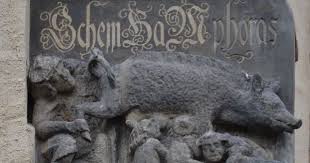 Not that the 19th-century statue is the only visible expression of disrespect for the Jews in Wittenberg. A carved bas relief on the town church features one of those late medieval Judensauen, showing Jews and piglets sucking on a sow’s teats while a rabbi peers into her anus.

Or as Luther put it in 1543, “Behind the sow a rabbi is bent over the sow, lifting up her right leg, holding her tail high and looking intensely under her tail and into her Talmud, as though he were reading something acute or extraordinary.”

Actually, Luther began his career as a reformer expressing a degree of friendly sympathy for the Jews, who he thought would convert once they saw how he had returned Christianity to its original pure state. But when it became clear that that was not going to happen, he turned against them. Anger management wasn’t Luther’s strong suit. 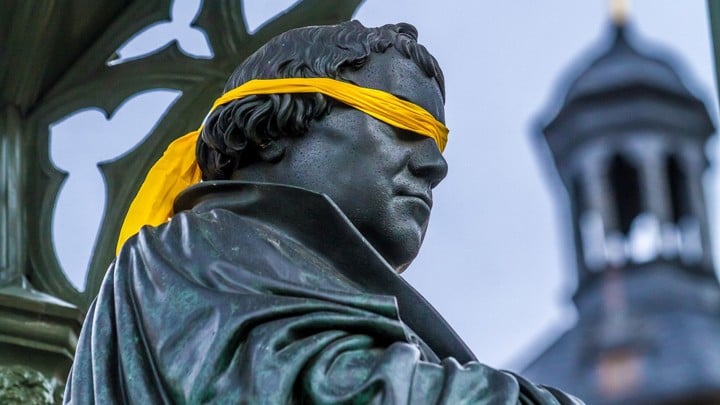 Two years ago, to show its rejection of Luther’s hatred of the Jews, the German Lutheran Church for a short time placed a blindfold over the eyes of the Wittenberg statue. It was a rather clever allusion to the conventional medieval portrayal of two women representing Church and Synagogue, in which Synagogue is blindfolded.

The point is, there’s a strong sense in Germany that when it comes to Martin Luther, anti-Semitism is not something you can afford to ignore. That became evident following the panel discussion at the Morgan, when a group of visiting German students jumped all over the curator of the Library’s current Luther exhibit.

Sure, there were the Cranach paintings of Luther and his wife, the rare broadside copy of the 95 Theses supposedly nailed to the Wittenberg church door, the iron chest for receipts from the sale of Indulgences, the early printed Luther Bibles. But why, they wanted to know, was there nothing dealing with Luther’s anti-Semitism, like a copy of his infamous pamphlet, “On the Jews and their Lies”?

Well, stammered the curator, his anti-Jewish writings were issued in only one or two small editions, they didn’t circulate widely. But yes, perhaps he should have pressed to get one of them.

As for Playmobil, after due consideration they’ve decided to remove “End” from the Old Testament page of the Bible in the Luther toy accessory packet. While they’re at it, they might consider adding a little blindfold as well.