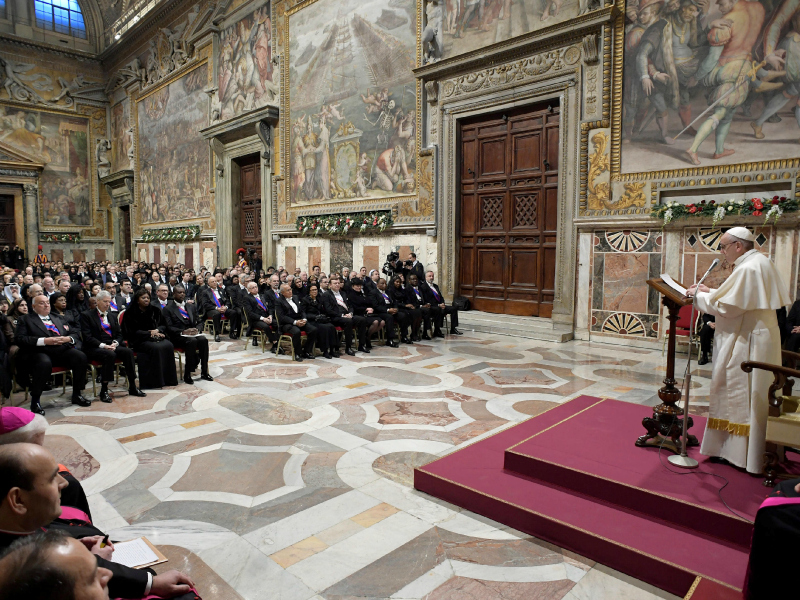 Pope Francis delivers his annual address to diplomats accredited to the Holy See for the traditional exchange of New Year’s greetings at the Vatican on Jan. 9, 2017. Photo courtesy of Osservatore Romano via Reuters

VATICAN CITY (RNS) Pope Francis urged political and religious leaders to do more to stop the rise of “fundamentalist terrorism” that he said had caused “homicidal madness” throughout the world.

In an address to the Vatican diplomatic corps on Monday (Jan. 9), the pope said religion was being used as a pretext for the “rejection, marginalization and violence” that had inspired fundamentalist attacks in the U.S., France, Germany, Turkey, Egypt, Iraq and other countries in the past year.

“We are dealing with a homicidal madness which misuses God’s name in order to disseminate death, in a play for domination and power,” Francis said in his annual New Year’s message to representatives from more than 180 countries.

He did not mention the Islamic extremism behind most of those attacks by name but focused on the perversion of any religion to justify violence.

“Fundamentalist terrorism is the fruit of a profound spiritual poverty and is often linked to significant social poverty,” he said. “It can only be fully defeated with the joint contribution of religious and political leaders.”

In the speech, which is effectively a “State of the World” view from the Vatican, the pope also reiterated his call to ban nuclear weapons, saying experiments by North Korea to build long-range missiles risked setting off a new nuclear arms race.

He also said that “easy access to the sale of arms, including those of small calibre, not only aggravates various conflicts, but also generates a widespread sense of insecurity and fear.”

“(P)olitical authorities must not limit themselves to ensuring the security of their own citizens — a concept which could easily be reduced to a mere ‘quiet life’ — but are called also to work actively for the growth of peace,” he said.

The Argentine pontiff cited several countries where terrorists inspired by fundamentalist beliefs had left a trail of destruction and numerous victims:

“These are vile acts that use children to kill, as in Nigeria, or target people at prayer, as in the Coptic Cathedral of Cairo, or travelers or workers, as in Brussels, or passers-by in the streets of cities like Nice and Berlin or simply people celebrating the arrival of the new year, as in Istanbul.”

While acknowledging the need for governments to be prudent, the pontiff also appealed to political leaders not to close their doors to migrants in need of protection.

“The current crisis should not be reduced to a simple matter of numbers,” he said. “Migrants are people with their own names, stories and families.”

He added the “humanitarian burden” should be shared and he thanked Italy, Germany, Greece and Sweden for their response in welcoming those in need.

The pope’s message called for peace in many of the world’s trouble spots, particularly Syria, Iraq and Yemen, and appealed for fresh dialogue between Israelis and Palestinians.

The pontiff began by noting that since the start of the first World War a century ago, many regions have enjoyed long periods of peace and stability that have fostered growth and prosperity.

But, he cautioned, “For many people today, peace appears as a blessing to be taken for granted, for all intents an acquired right to which not much thought is given.”

Today, he said, “even in places once considered secure, a general sense of fear is felt. We are frequently overwhelmed by images of death, by the pain of innocent men, women and children who plead for help and consolation, by the grief of those mourning the loss of a dear one due to hatred and violence, and by the drama of refugees fleeing war and migrants meeting tragic deaths.”

“Peace is a gift, a challenge and a commitment,” Francis said.

The Vatican has diplomatic relations with 182 countries and 88 have embassies in Rome, it said.

News
Pope Francis pushes to purge liturgy of ideology in new document
Follow us on Facebook!
Submit your photos to RNS