(RNS) The immigration debate has witnessed a parade of cases of selectively appealing to Scripture to support open borders and amnesty for immigrants who enter the country illegally. It is ironic that the political and religious left who normally eschew treating Jewish and Christian Scriptures as a source of authority when it comes to matters of public policy have suddenly dusted off their Bibles for the immigration debate.

Back in 2010, Debra Haffner, a Unitarian Universalist minister — a church not known for taking Scripture seriously — turned Bible thumper in response to Arizona’s illegal immigration law, writing: “It’s as if the 70 percent of Arizonans who support the law have forgotten the Biblical injunction to ‘love the stranger for you were strangers in the land of Egypt.’”

Now, John Gehring has chided Sen. Jeff Sessions, the attorney general nominee whose confirmation hearing is Tuesday (Jan. 10), for his handling of the Bible to inform his position on the status of illegal immigrants. Gehring recalled how Sessions quoted the Old Testament during a 2013 Senate hearing on immigration. As it happens, Sessions was citing my book “The Immigration Crisis: Immigrants, Aliens and the Bible” (Crossway, 2009).

Gehring argues that Sessions’ view is basically un-Christian and out of the mainstream, opining: “religious leaders — including many conservative evangelicals — widely agree God’s central message to the Israelites is to protect and defend the stranger.”

Leviticus 19:33 is one passage quoted in this regard:

This wonderful passage has nothing to do with illegal immigrants in America, contrary to what Gehring and his ilk so piously believe. They need to go to Sunday school, better yet study “Hebrew for Dummies“! 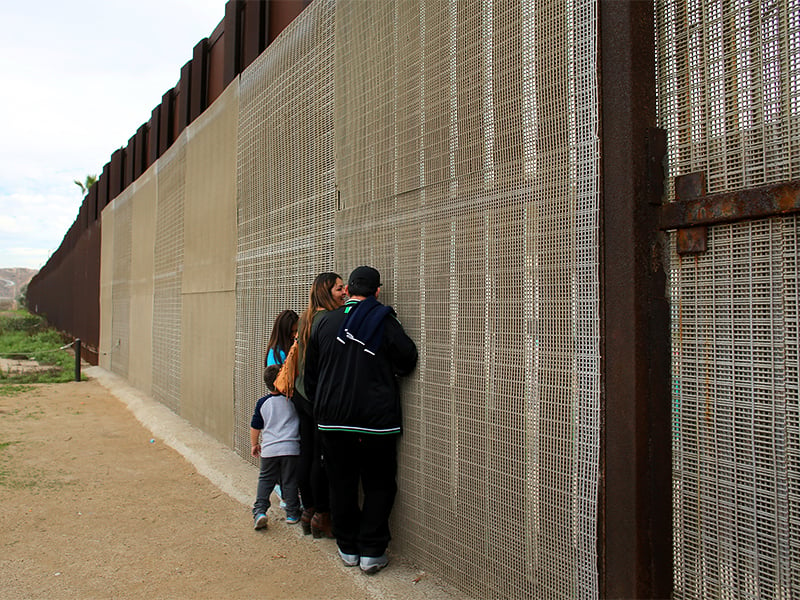 Families separated by the two countries chat along the U.S.-Mexico border fence at Border Field State Park, Calif., on Nov. 19, 2016. Photo courtesy of Reuters/Mike Blake *Editors: This photo may only be republished with RNS-HOFFMEIER-OPED, originally published on Jan. 10, 2017.

Old Testament laws were primarily intended to promote an orderly society for a nation — ancient Israel. Simplistic application of 3,000-year-old laws to American society is ill-advised until one thoroughly understands what was meant by “stranger” in this verse. The Bible is not “a living breathing document” that can mean whatever one wants it to say.

Regarding the Hebrew Scripture’s instructions on the “stranger,” two fundamental questions must be answered: What is a “stranger,” and how did people obtain that status?

The relevant Hebrew word is “ger,” variously rendered in different English translations of the Bible as “stranger,” “sojourner,” “alien” and more recently as “foreigner.” The latter is quite misleading because there are other Hebrew terms for foreigner — for example, “nekhar,” or one who is passing through another country and not seeking residence. “Zar” is another Hebrew term rendered “foreigner,” but it has a more hostile nuance: a squatter or an enemy. The “ger” alone has obtained legal status to live in a different country and might be seen as a foreigner who has become a “protected citizen.”

How did people become legal aliens (gers) in another country? The classic example is when Jacob’s family went to Egypt to escape a famine in Canaan. They asked Pharaoh for permission:

No less authority than the king of Egypt granted this permission. This means that the Hebrews, though foreigners, obtained legal status in Egypt; they were gers.

In biblical law the distinction between the alien or stranger (ger) and the foreigner (nekhar) is striking. The ger in Israel could receive social assistance such as the right to glean in the fields (Leviticus 19:9-10; Deuteronomy 24:19-22) and resources from the tithes (Deuteronomy 26:12-13). The ger and citizen were to be paid alike (Deuteronomy 24:14-15).

It is wrong, therefore, to confuse these two sociological categories of foreigners and then to use Scripture regarding the ger as if it applied to immigrants of today who enter the country illegally. I would argue that if one wants to apply biblical passages regarding the ger to our context, green card holders would better correspond. They need protections so as not to be abused and exploited as we have unfortunately seen. Old Testament law simply does not address how people in the U.S. illegally should be treated.

My intention here is not to discourage utilizing biblical principles to shape public policy and law, but to call out the abuse of Scripture and to urge that it first be read carefully and contextually before emotionally satisfying, but simplistic and inaccurate, interpretations are applied to 21st-century American issues. Certainly Christians should not be made to feel guilty by the exploitation of Scripture by social justice activists who seek to advance a particular political agenda.

(James K. Hoffmeier is professor of Old Testament at Trinity Evangelical Divinity School and author of “The Immigration Crisis: Immigrants, Aliens and the Bible”)