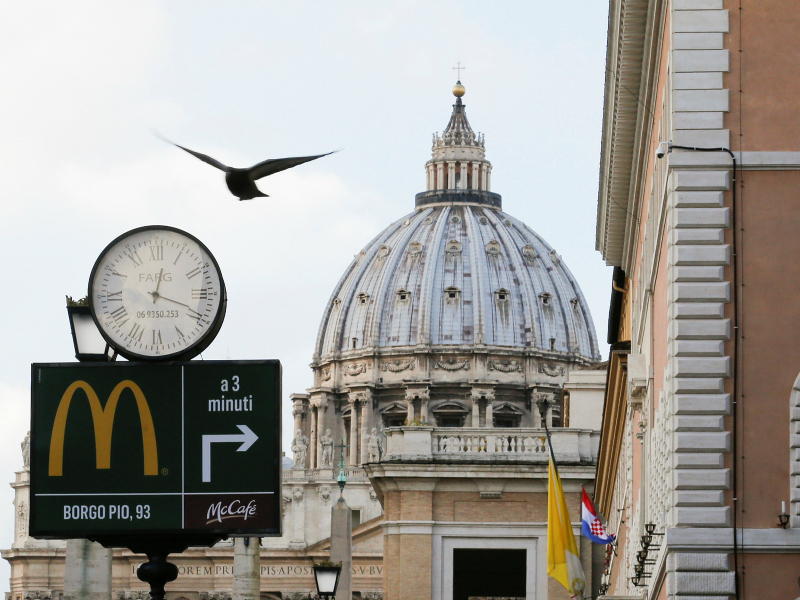 A sign in front of St. Peter’s Basilica points to the newest McDonald’s restaurant in Rome, next to the Vatican. Jan. 3, 2017. Photo via Reuters/Alessandro Bianchi

VATICAN CITY (RNS) A McDonald’s opening in the shadow of St. Peter’s Basilica is to offer free meals to the homeless in a move aimed at defusing controversy over the fast-food restaurant.

McDonald’s said Thursday (Jan. 12) that it is working with the archbishop who dispenses charity on behalf of Pope Francis to provide 1,000 free lunches to the homeless who live in the area around the Vatican every Monday starting next week.

A company spokesman said the Italian charity Medicina Solidale, which offers medical care to the poor, had approached the global hamburger chain to request the weekly donation. Volunteers from the charity will collect the meals from the restaurant, which is near the square, and distribute them.

“Providing a meal guarantees an appropriate supply of proteins and vitamins to so many men and women who live on the street,” said Lucia Ercoli, director of the charity. “I am very happy with this agreement with McDonald’s.

“We have been working with the pope’s almoner” — Polish Archbishop Konrad Krajewski, who provides meals and services on behalf of the pontiff — “for a while to provide these people with medical visits and care.”

As severe winter weather continues to sweep across Italy and other parts of Europe, Pope Francis has urged Krajewski and his staff to take extra steps to protect the homeless from below-freezing temperatures on the streets of Rome and elsewhere.

Francis also called for shelters to remain open 24 hours a day and asked that Alpine-grade sleeping bags and Vatican cars be provided for those who refuse to sleep indoors.

Many homeless gather near St. Peter’s to take a daily shower in the bathrooms the pope has installed beside the square; Medicina Onlus says it is providing medical care to around 200 homeless around the Vatican each week.

The McDonald’s initiative follows a backlash from cardinals and residents who opposed the opening of the store so close to the Vatican in a building owned by the Holy See.

Last year, Italian Cardinal Elio Sgreccia said the proposal to open a branch of McDonald’s below a Vatican-owned building where several cardinals lived was a “controversial, perverse decision.”

He also said serving burgers and fries in the neighborhood was unacceptable because the American-owned chain’s cuisine breached Italian taste.

“It’s a commercial decision that ignores the culinary traditions of the Roman restaurant industry,” said Sgreccia, who is president emeritus of the Vatican’s Academy for Life, which leads the church’s fight against abortion and euthanasia.

Italian media reported that McDonald’s is paying $32,000 a month in rent for the store. It also said legal action by consumer group Codacons to close the store had been rejected by a Rome court earlier this week.