Many American voters who held their noses and cast a ballot for president-elect Donald Trump said they did so because of his campaign promise to overturn Roe v. Wade, overriding their other concerns about his lack of experience or his fundamental character problems.

I have a couple of friends in this category. Deeply religious people, they admitted that they voted with tunnel vision. Abortion, they said, was so important an issue that they had to vote for the candidate who promised to make it illegal.

Yeah. About that. Not only is Trump unlikely to repeal Roe, but his administration may become a catalyst for actually worsening abortion rates in this country. The history of the last thirty years shows that America has had its best success in decreasing abortion when Democrats have occupied the White House, not Republicans.

That is largely because women are more likely to abort a fetus when they lack adequate jobs and health care coverage -- which is the economic situation Trump wants to reduce them to.

Last night, the U.S. Senate began the process of repealing the Affordable Care Act (“Obamacare”), carrying out Trump’s pledge to return millions of Americans to their formerly uninsured status. (Trump has also promised to replace the program with “something better,” which has not yet been specified.)

When the ACA repeal is complete, it is possible – even likely – that Trump will have contributed to an upturn in the number of abortions in America.

And that is where Republicans fall short.

Let’s take a look at the CDC's annual numbers. After increasing under Nixon, Ford, Carter, and Reagan, abortion began to decrease in the late 1980s with the administration of George H. W. Bush (senior). It has continued to decrease with every presidency ever since, so that’s something to celebrate. 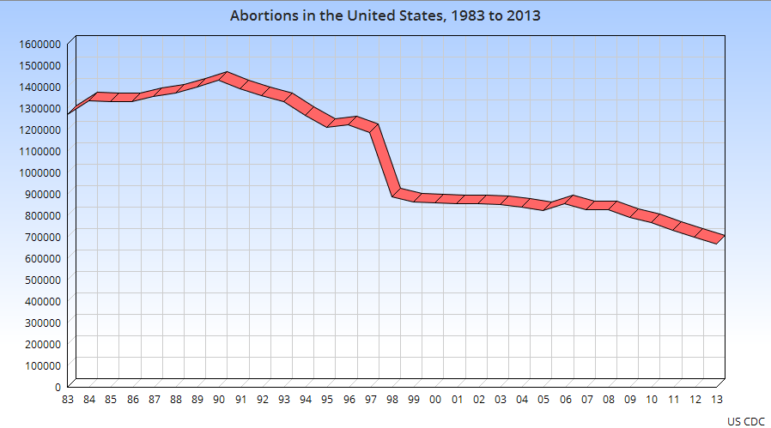 However, the more dramatic plunges have occurred with Democratic presidencies, not GOP ones.

In other words, abortions decreased during Bill Clinton’s presidency by nearly ten times the amount they decreased during George W. Bush’s (-36.9% vs. -3.7%), even though both men served the same number of years. During Bush Sr.’s administration, the rate of abortion didn’t even drop by a single percentage point.

Despite his promises to repeal Roe v. Wade, Donald Trump’s economic policies are poised to Make America Abortion-great Again. He's creating the perfect storm of economic conditions in which abortion flourishes. Poor women now face a lack of health care (including contraception coverage), increased tax rates for the poor, a stagnant minimum wage, severe cutbacks to food stamps and Medicaid, AND an end to early-childhood programs for educating their kids.

Republicans, apparently, want every unborn child to have a chance at being born. But if those children also want health care, food, or an education, they're out of luck.