JAKARTA (Reuters) Indonesian Islamist groups on Monday called on the government to suspend the Christian governor of the capital and for the courts to convict him of blasphemy, demands they will make again at a rally outside parliament on Tuesday.

Islamist groups have held two big rallies since November against the governor of Jakarta, Basuki Tjahaja Purnama, who is on trial for insulting the Koran, and in the midst of an election in which he hopes to win a second term.

“Our demands to parliament are that they urge the government to suspend Purnama … and urge the Supreme Court and judges to detain him and impose the maximum sentence,” said Muhammad al Khaththath of the Islamic People’s Forum.

The forum is one of the groups organizing the Tuesday rally.

Previous rallies drew hundreds of thousands of people and raised concern about the erosion of religious tolerance in the world’s most populous Muslim-majority country.

He has been allowed to remain in office while the court case is going on but faces up to four years in prison if found guilty of blasphemy.

His supporters say the charge against him is politically motivated.

Last Wednesday, he stood against two Muslim candidates in a city governor election but none of them got enough votes to win outright.

A second round is due in mid-April with Purnama competing against a former education minister, Anies Baswedan, who has appealed to the Muslim vote in the city of more than 10 million.

Jakarta police have stepped up security ahead of Tuesday’s demonstration which up to 10,000 people are expected to join, said police spokesman Argo Yuwono.

The Jakarta election is widely seen as a proxy battle for the next presidential election in 2019.

Purnama is a former deputy of President Joko Widodo, when Widido was Jakarta governor, and he is being backed by the president’s party.

Baswedan is backed by a retired general, Prabowo Subianto, who Widodo defeated in the last presidential election, in 2014, and who is promising a political comeback. 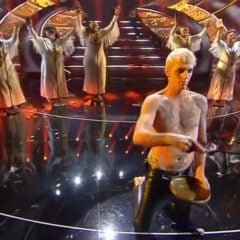