Eyes fall closed, heads bow in prayer and fidgety limbs come to rest. The crowd is lost in a Byzantine soundscape as five singers chant the Akathistos hymn, an Orthodox liturgical chant composed in the sixth century.

But as they sit in a gym on Normandie Avenue in Central LA, the audience is not only hearing the singers. They are also hearing the sounds of Agia Sophia, one of the oldest churches in the Greek city of Thessaloniki.

This unique, auditory moment is made possible by a collaboration between two professors who are recreating the acoustic experiences of ancient spaces.

“We create what I like to call an ‘acoustic photocopy,’” said Chris Kyriakakis, professor of electrical engineering and director of the Immersive Audio Laboratory at University of Southern California. “Once you have that, you have captured the soul of a building.”

The recital in LA, which took place on the campus of St. Sophia Cathedral in early February, was the first time the team used acoustic photocopies to re-create the experience of an ancient building for a live audience.

The free event drew 700 people just days after it was announced.

Liturgical music is an important aid to prayer in the Greek Orthodox Church, and preserving the acoustic ecology of these spaces is essential to preserving the religious integrity of the services.

“Those buildings have been there for thousands of years and hopefully will be around for thousands more. But one day, they may not be,” said Kyriakakis.

This project embraces a mode of preservation many historians overlook: the auditory experience.

Kyriakakis and UCLA’s Sharon Gerstel, his creative partner, hope their research will enhance the public’s understanding of these historical spaces by adding the visceral element of sound.

The initiative began when Gerstel, an art history professor who studies Byzantine architecture, read about Kyriakakis’ research on immersive audio in The New York Times.

When she reached out to propose a collaborative trip to Greece, he gladly accepted her offer. Having been baptized in Thessaloniki’s Agia Sophia, Kyriakakis felt a personal connection to the project from the start.

“To me, it’s a history expedition. I believe in using science to unveil the past,” he said.

Together, the two recorded the sounds in nine different Greek Orthodox churches, using seven advanced recording devices to capture the voices of liturgical chanters. The acoustical information can then be stored digitally and fed through speakers to re-create the recorded sounds.

Gerstel says connecting sight with sound changes the neurological response, and this was a key part of the experience in the early Greek Orthodox church. At Agia Sophia, life-sized images of saints line the walls, many holding scrolls that correspond to various verses from the chants.

“When you hear and see simultaneously, your body has a very powerful experience,” Gerstel said. “It’s critical to the emotional response to worship, and I think the Byzantines were very keyed into that.”

The connection between sound and image was particularly powerful in the premodern period. For members of the congregation, the experience was designed to assist with their prayers and elevate them to a higher level of thought.

“The primary purpose of the music is not to create enthusiasm or to bring attention to itself, but to be of service to the prayer and spirits of the congregation,” said Dimos Papatzalakis, speaking in Greek.

He was one of the chanters at the LA event, where the music took center stage in the absence of religious imagery. “The priest, the congregation and the chanter are forming one body in raising their voices and prayers to God,” he said.

Gerstel said she and Kyriakakis were sensitive to the religious significance of the hymns when planning the event; the chanters were not accompanied by instruments or dancers when they performed. But the audio experts fed the singers’ voices through acoustical data that allowed the projected sound to mimic how one would hear them in Agia Sophia.

The Rev. John Bakas, St. Sophia’s priest, underscored the key role of the hymns during prayer. “The music allows us to transcend this world, to tone down passions, to have introspections, to meditate and to pray,” he said.

So far, the research has focused on Greek Orthodox churches, but Gerstel said it has implications for the broader religious experience. Domed synagogues create similarly immersive acoustics for worshippers when cantors pray.

The ongoing project aims to record diverse religious spaces, showing, in Gerstel’s words, “how important — and deliberately calculated — sound is for the perception of the sacred, and for spiritual transformation.”

The team has already been invited to collect data from historic buildings in Turkey and gothic cathedrals in France. The end goal is to create an “acoustic museum” where visitors can experience the sounds of these spaces virtually.

“You pick the building and the century, and you can be there,” Kyriakakis said.

Gerstel adds, “You could even sit in your car and be in church. There are so many exciting possibilities.”

(Zara Abrams is a master’s student in the University of Southern California’s specialized journalism program. She writes about science and religion) 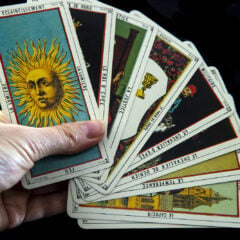 Articles of Faith
Giannis Antetokounmpo: NBA stardom without the ego