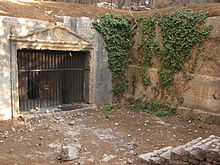 Tomb of the Sanhedrin, from around the time of Jesus
March 3, 2017
Mark Silk

Woe unto you, scribes and Pharisees, hypocrites! for ye are like unto whited sepulchers, which indeed appear beautiful outward, but are within full of dead men's bones, and of all uncleanness.  -- Matthew 23:27

You are probably familiar with the Washington Post's Fact Checker column, which gives public officials Pinocchios for mendacity. Tell a small lie and you get one Pinocchio. Tell an outrageous whopper and you get four.

With the advent of the Trump Administration, it is incumbent on us to institute a comparable Hypocrisy Checker column, with Whited Sepulchers in place of Pinocchios. Herewith the first installment.

Two decades ago, then-Sen. Jeff Sessions (R-AL) supported the impeachment and conviction of Bill Clinton for denying under oath his sexual relationship with Monica Lewinsky. As Clinton famously fibbed: "I did not have sexual relations with that woman, Miss Lewinsky.)

"I have no doubt that perjury qualifies under the Constitution as a high crime," Sessions said at the time. "It goes to the heart of the judicial system."

Now it turns out that Attorney General Sessions was not telling the truth himself when, in a curious echo of Clinton, he testified under oath at his confirmation hearing, "I did not have communications with the Russians." In fact he did, twice.

Fact Checker says that it "remains unclear" whether Sessions intentionally misled senators with this untruth. We'd say that's pretty charitable. Prior to Trump's taking office he had a private meeting with the Russian ambassador to the United States in his capacity as one of the president-elect's surrogates.

Still, Sessions' enunciation of the hard line on perjury took place a long time ago. While there's no statute of limitations on hypocrisy, the chronological proximity of the pious pronouncement and the misdeed does count.

Even as Mike Pence  was telling Meet the Press in September that Hillary Clinton's handling of her private email server should "disqualify her from serving as president," he was using his own private email account to transmit sensitive homeland security information as governor of Indiana.

To be sure, Pence was a mere governor, and so was hardly in the position to compromise national security that Secretary of State Clinton was.

But to be waxing opprobrious about someone being disqualified for office when you are behaving the same way is big-league hypocrisy. And with his chalky coif, the Vice President is straight out of sepulchral central casting.

The President made his political name by embracing the false and repeatedly disproven claim that Barack Obama was not born in the United States. In the course of his campaign for the presidency, he endlessly repeated misinformation about employment, economic growth, trade, crime rates, and immigration.

He made the nation's leading propagator of such misinformation his chief campaign and White House strategist.

Yet since the concept arrived on the scene, the President has made it a practice to denounce coverage he doesn't like as "fake news," while denouncing its purveyors as "the enemy of the people."

We judge this to be hypocrisy unprecedented in the history of American politics.