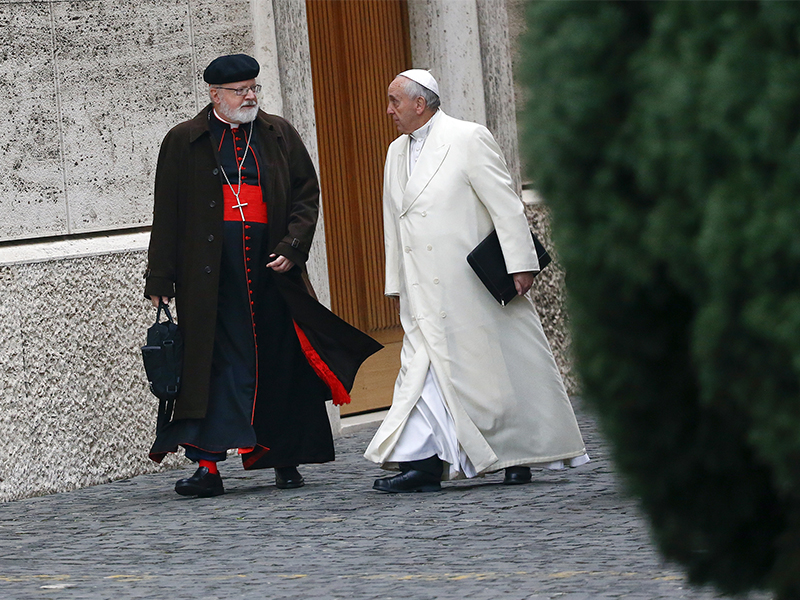 Pope Francis talks with Cardinal Sean Patrick O'Malley, left as they arrive for a consistory at the Vatican on Feb. 13, 2015. Photo courtesy of Reuters/Tony Gentile
March 27, 2017
Josephine McKenna

ROME (RNS) Pope Francis’ sex abuse panel has pledged to continue its work minus the two sex abuse victims who were appointed to help overhaul the Catholic Church’s response to the scandal.

Irish abuse survivor -- a term many prefer to be known by -- Marie Collins recently resigned from the Pontifical Commission for the Protection of Minors. British abuse survivor Peter Saunders stepped down from the commission a year ago and has called for more urgent action to tackle perpetrators of these “vile crimes.”

But a commission statement vowed that victims of clerical abuse should have a voice in the future.

“Commission members have unanimously agreed to find new ways to ensure its work is shaped and informed with and by victims/survivors,” read a statement released after concluding a meeting in Rome on Sunday (March 26).

Collins, who was sexually abused by a priest at age 13, resigned on March 1, citing what she called "shameful" resistance to commission proposals from the Vatican's powerful doctrinal office, which is responsible for pursuing cases against abusive priests and bishops.

Saunders stepped aside after publicly calling for Australian Cardinal George Pell to be dismissed after news reports surfaced that he had protected pedophile priests in Australia. Pell serves as the Vatican’s finance chief.

Asked if the panel would include survivors in the future, Boston Cardinal Sean O’Malley, told the online Catholic service Crux on Monday: “We’re grappling with that right now as a commission. Perhaps having survivors who were known as survivors was part of the reason they got so much attention.”

Saunders, who was abused as a child by two Jesuit priests and the head of a Catholic primary school, established the National Association for People Abused in Childhood 16 years ago in the United Kingdom. He said there was a need for more urgent action to protect children at risk.

“Many people contact me to ask if the pope is serious,” Saunders told RNS Monday. “We know there are many priests in place who should be moved.

“Cardinal Gerhard Muller from the Congregation for the Doctrine of the Faith said it was up to local dioceses, but the reality is they are not doing enough. Globally it is still a big challenge and there is a reluctance of local bishops to act.”

In its statement Sunday, the commission expressed support for Collins and individual members told the media they endorsed her criticism of the doctrine office.

Hollins also said that the commission was listening to survivors and would not be rushed into appointing a survivor to the panel.