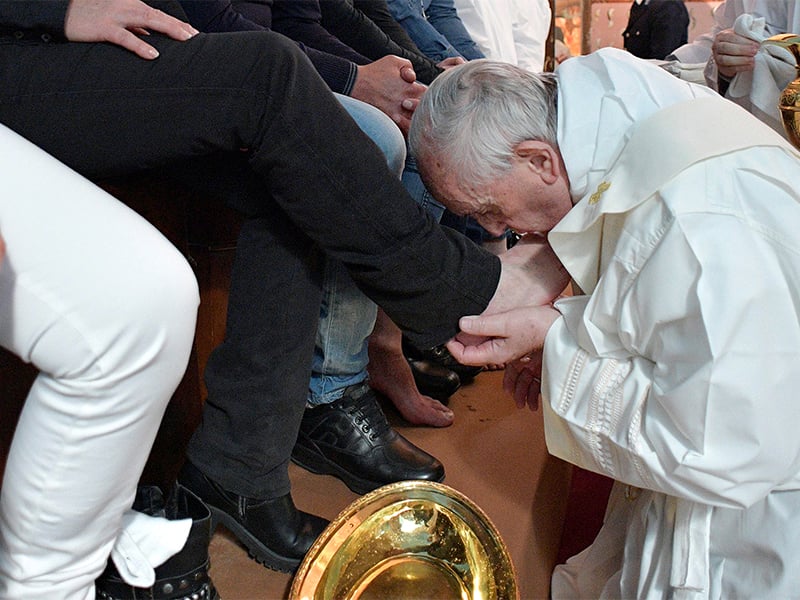 Pope Francis washes the feet of some inmates at the Paliano prison, south of Rome, on April 13, 2017. Photo courtesy of Osservatore Romano via Reuters
April 13, 2017
Josephine McKenna

ROME (RNS) Pope Francis washed the feet of 12 prisoners in a prison outside the Italian capital known for housing Mafia turncoats as part of a Maundy Thursday Lenten ritual that is also in keeping with the pope’s theme of mercy.

As in years past, the 80-year-old pontiff poured water on the prisoners’ feet and kissed them to recall Jesus' washing the feet of his apostles at the Last Supper, which Christians believe took place Thursday (April 13) two millennia ago.

The 12 inmates who took part included a Muslim who is expected to be baptized as a Catholic in June, three women and two inmates serving life terms. The event was closed to the media and the Vatican described it as a “strictly private” occasion.

"Everyone has the right to make a mistake,” the pope said in an interview published in the Italian daily La Repubblica ahead of his visit. “We have all made mistakes in one way or another.”

Francis said his decision to celebrate Maundy Thursday, also known as Holy Thursday, with prisoners was  “a duty which comes from my heart,” and he challenged others to give up their prejudices about those in jail.

“It’s hypocrisy if you don’t think it’s possible to change your life,” he told the daily. “There’s not enough faith in rehabilitation, in reintegration into society."

There are 70 inmates at the prison and almost all are Mafia members who have collaborated with police and prosecutors in exchange for shorter prison terms. A total of 58 prisoners were expected to meet the pope on his arrival, and the pontiff was also expected to visit a man and a woman in solitary confinement, according to Vatican Radio.

Since he was elected in 2013, Francis has often spoken out against the Mafia and warned mobsters they would “go to hell” if they did not repent.

On several occasions he has also met the families of Mafia victims, and on a visit to Naples in 2015 he urged criminals to “convert to love and justice.”

His visit to Paliano prison continues a practice he began soon after his inauguration in 2013 when he went to the Casal Del Marmo youth detention center and washed the feet of inmates, including Muslims and women.

Paliano prison offers inmates training in activities such as pastry and pizza making, carpentry and agricultural production to help them “overcome prejudice and pave the way for their rehabilitation,” said prison director Nadia Cersosimo.

On Thursday, the prisoners gave the pope pastries, vegetables grown in the prison garden and a woolen cape made by women inmates.

The foot washing is the first of several Easter engagements for Francis, which will culminate in his Urbi et Orbi (Latin for "To the city and the world") blessing in St. Peter’s Square on Easter Sunday.