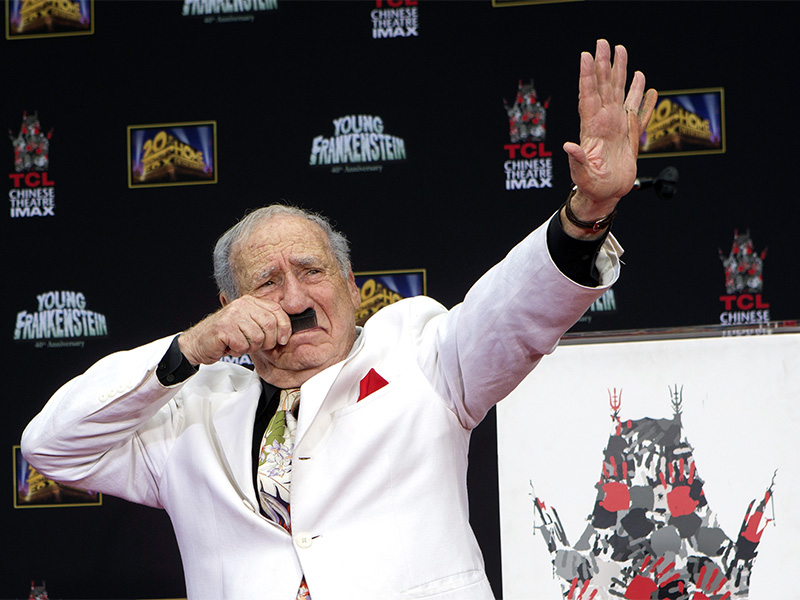 Filmmaker and comedian Mel Brooks uses a comb to mimic a Hitler mustache as he places his footprints in cement, with a fake sixth finger attached to his left hand, in the forecourt of the TCL Chinese theatre in Hollywood, Calif., on Sept. 8, 2014. Photo courtesy of Reuters/Mario Anzuoni
April 19, 2017
Kimberly Winston

(RNS) Two Jews set out to kill Hitler, intending to ambush him at 8 0'clock.

The first Jew turns to the second Jew and says, "Gee, I hope nothing happened to him."

Whether that joke, or any joke about 9/11, the Charlie Hebdo massacre or rape can be funny or is always bad taste is the subject of "The Last Laugh," a new documentary film from Ferne Pearlstein.

In it, Pearlstein asks superstar comedians Mel Brooks, Carl Reiner, Rob Reiner, Sarah Silverman and Gilbert Gottfried (the author of that "kill Hitler" joke), among others, to consider whether an epically horrific event like the Holocaust, in which 6 million Jews were murdered, can, or should, be fodder for fun.

The consensus is summed up by Gottfried when he says, "Somebody once said, 'Tragedy plus time equals comedy.' And I always felt, why wait?"

The documentary, which Pearlstein began filming in 2011, had its genesis about 20 years earlier when she and her friend Kent Kirshenbaum discussed "Maus: A Survivor's Tale" by artist Art Spiegelman with an elderly Holocaust survivor.

The survivor, who had not read the Pulitzer Prize-winning graphic novel, was upset that it was published (and mistakenly assumed it was humorous).

"Her response was there is nothing funny about the Holocaust," Pearlstein recalled. "She said, 'You can’t cover it in the funny pages.'"

That conversation stuck with Pearlstein throughout her graduate studies in film at Stanford University. Kirshenbaum, meanwhile, also inspired by that conversation, wrote a 40-page paper about humor and the Holocaust as part of his graduate work.

That paper, also titled "The Last Laugh," became the foundation for the film.

The film intersperses interviews with people in the business of funny with the story of 93-year-old Holocaust survivor Renee Firestone.

Firestone, who now lives in Los Angeles and frequently speaks to students, was taken from her home in Hungary to Auschwitz. There, she encountered Dr. Josef Mengele, who experimented on her younger sister, Klara. Klara did not survive.

"Whenever I remember, I cry, and whenever I don’t remember, I laugh, I smile," Firestone says in the film as she looks at photos of her family before the war. "And I am glad that I am able to smile and laugh. It would have been a horrible life for me for 70 years to just cry."

In the film, Firestone watches some of the comedians tell their Holocaust jokes. Some she finds "not funny," while others she pronounces "true." But most earn her high, Minnie Mouse giggle and floodlight smile.

Not everyone in the film finds the Holocaust so funny. Asked if he has a Holocaust joke, Mel Brooks — whose film and Broadway show "The Producers" is about a Hitler musical — says: "No. I can't go there." And at a survivors' convention in Las Vegas, one woman says: "I am sorry, I didn't find any humor at all. Just sadness and tragedy."

A man in a white yarmulke seated next to her says: "We were laughing. We were all miserable. But without humor I don’t think we would have survived."

That is the consensus of many in the film. Author Etgar Keret concludes "humor is a way of bearing an unbearable reality," while Silverman — who has won both approval and condemnation for Holocaust jokes in her material — says, "Comedy puts light on to darkness. Darkness can't live in the light."

No one in the film knows that better than Robert Clary, the French-born song-and-dance man who was deported to the camps at 16. Comedy, he said, kept him alive — the only one of his 13-member family to survive. He went on to a career that included, most notably, playing an inmate at a German POW camp in the television show "Hogan's Heroes."

"That was second nature to me — singing, dancing, clowning around," Clary says in the film. "That helped me tremendously. ... For the 15 minutes that I sang, they forgot who they were and that was the most important thing. And that's what made me being alive."

Pearlstein's family was not caught up in the Holocaust. While making the film, she was surprised when Carl Reiner said, "If you were funny before the camps, you were funny in the camps."

"If that is who you are, the Holocaust doesn’t change that," she said. "That was a fascinating revelation to me. It made me think, if I was there would I be one of those people?"

Firestone, who has traveled the film festival circuit with Pearlstein for more than a year, said she has a favorite Holocaust joke of her own. It's tied to a clip, included in the film, from Brooks' "History of the World, Part 1," which shows an ice skating Hitler.

"I love to see that because it portrays how happy he is," Firestone said in an interview from her home in Los Angeles. "And then I say to myself, 'You were so happy and you thought that I am going to be so sad. And here we are! You are dead for so many years already and I am still here.'"

"The Last Laugh" airs April 24 — Holocaust Remembrance Day — on PBS' "Independent Lens" and opens this month in theaters around the country.