A Hasidic Jewish man approaches a Muslim man on the streets of New York City. It sounds like the opening line to an inappropriate joke, but it's actually a scene in a campaign put out by Tribeca Film Festival called "See Yourself in Others." The stunning one-minute short film, which is posted below, features a diverse group of people walking around Manhattan wearing mirrored boxes on their heads to make the point that peacemaking begins when we learn to empathize with "the other."

I was so impressed by this provocative short that I tracked down the director, Jared Knecht. Still in his twenties, he has already compiled an impressive resume with clients ranging from Redbull to Victoria's Secret, and Compassion International to Crossway. Knecht's short film "Skumaskot," shot on location in Iceland, was a selection at last year's Cannes Film Festival. (It's stunning, and you should watch it too.)

Here we discuss the imagery featured in this campaign and why he believes society is failing to foster empathy.

RNS: Tell me about the mirrored boxes as a symbol. What did you hope to accomplish with this image?

JK: Movies kind of resemble mirrors. Living through someone else for two hours and seeing the world as they do is how I fell in love with film. The mirror boxes were a fun idea to make that experience literal. It provoked a curious interaction with the hope to literally see yourself through the eyes of someone else.

RNS: Where is society failing right now in terms of empathy?

JK: I think we are innately selfish,and at times, scarcely sympathetic for others. There is a big difference between sympathy and empathy. Sympathy says, "I hate that you are going through that." Empathy says, " I've been there, and I know how you feel." In a world where we may not fully comprehend our differences, we are all the same. We have common ground. It's through our differences that we have the chance to get there.

RNS: The image at the end with the Hasidic Jewish man and Muslim man is particularly striking. Tell us about why you decided to portray that.

JK: Inherently, we are saying whoever adorns the mirror box is deserving of empathy. So I wanted the spectrum to cover everyone. Socially and politically, it has been a divisive year. We wanted to portray each side as best we could, covering some polarizing issues. The Muslim man and Hasidic Jew was representative of our religious differences. I hope the tone of the film illustrates that their isn't a cookie cutter answer per se, but as these two New Yorkers demonstrate, we can confront each other and confront ourselves. 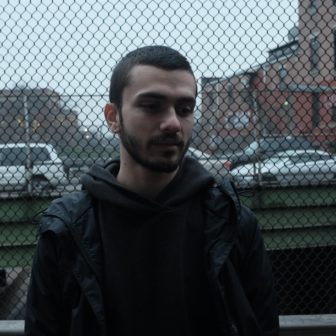 RNS: Which faith tradition did you come from, and how does that tradition inform your understanding of what it means to see yourself in others?

JK: Regardless of where I came from, I think everyone is searching for coherence and purpose in life. Right there, that's common ground. But I grew up in Christianity. One thing that stood out to me is that when God forgives us, he is basically saying his own rules don't matter. That he values a relationship more. When religion is paramount, we lack empathy. When relationships are paramount, we find empathy.

RNS: If you learn to see yourself in another, the work has just begun. You must then learn to respect, to serve, to love them as well. How do you think people can begin making the leap?

JK: I did a little side experiment while shooting where we interviewed each participant. I asked them questions like, "What is your greatest joy in life?" and "What is your greatest loss?" and "What makes a hero?" Though we gathered a wildly diverse group of people, everyone's answers were very similar and profound. My favorite and personal takeaway was everyone's definition of hero. Most said something like, "a hero is someone who acts courageously at the cost of himself or herself in service of someone else." These are the stories i'm interested in, and that I think Tribeca is interested in. And hopefully we can encourage others to stop and think differently about our differences.