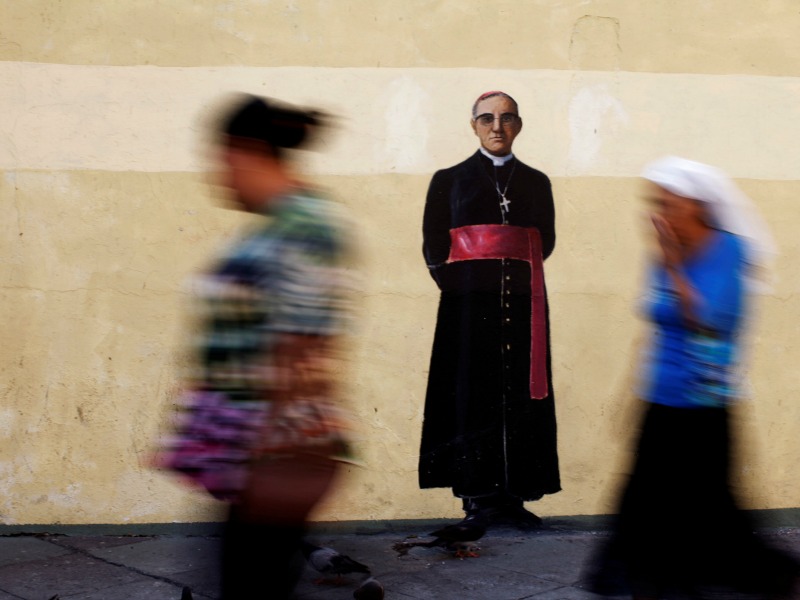 People walk by a graffiti of the murder of late Archbishop of San Salvador Oscar Arnulfo Romero on May 18, 2017, in San Salvador, El Salvador. Photo by Jose Cabezas/REUTERS
May 19, 2017
Gerardo Arbaiza

SAN SALVADOR (Reuters) A judge in El Salvador has reopened the nearly four-decade-old case of murdered Archbishop Oscar Romero, an icon of the Roman Catholic Church in Latin America, and asked that prosecutors seek criminal charges against the main suspect.

The ruling on Thursday (May 18) by Judge Ricardo Chicas follows a decision last year by the country's constitutional court to repeal an amnesty law that prohibited criminal trials stemming from the Central American nation's bloody civil war from 1980 to 1992.

The main suspect in the killing of Romero is Alvaro Rafael Saravia, a former soldier who had his case dismissed in 1993 as a result of the amnesty law.

Romero, then archbishop of San Salvador, was shot dead in 1980 by a right-wing death squad as he celebrated Mass in a hospital chapel.

The prelate had often denounced repression and poverty in his homilies.

The murder was one of the most shocking of the long conflict between a series of U.S.-backed governments and leftist rebels in which thousands were killed by military death squads.

No one was ever brought to justice for Romero's murder.

El Salvador's civil war claimed some 75,000 lives before it ended with a peace agreement in 1992.

Romero was beatified by Pope Francis in 2015, which is one step before sainthood in the Catholic Church.