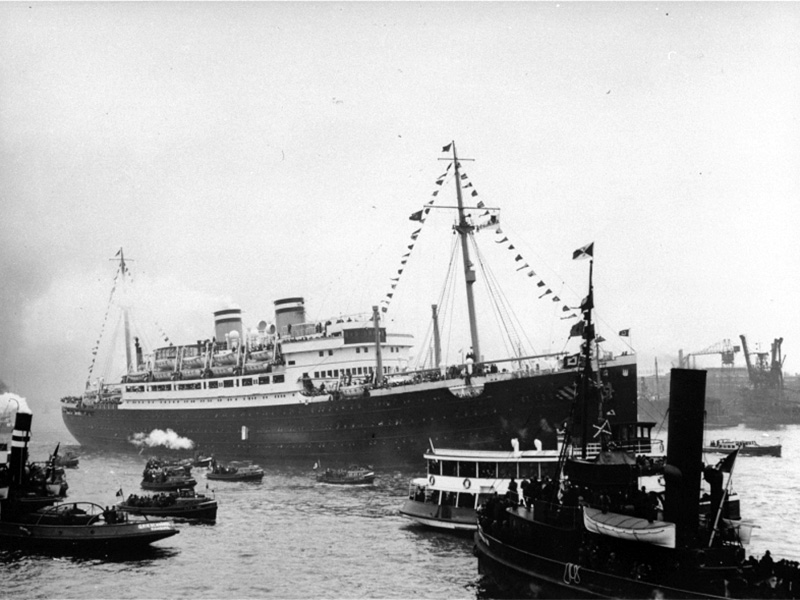 The MS St. Louis surrounded by smaller vessels in the port of Hamburg, Germany, in 1939. Photo courtesy of Creative Commons/USHMM
June 6, 2017
Mark Hetfield

The first time was in June 1939, on the deck of the St. Louis. She was traveling with her husband, brother, mother, and father, and as they neared America, they were drawn by the lights of Miami — to them, a sign of freedom and safety.

The second time Ilse saw the shore of America was after the war. This time, she was alone.

Between those two sightings, the Nazis deported Ilse’s father to Majdanek, Poland, where he perished. Ilse was sent to Auschwitz, as were her husband, mother and brother. Her loved ones were murdered in the gas chamber. Ilse survived.

When she approached the coast of America without her family, Lady Liberty in New York Harbor greeted Ilse. Though she was here to stay, she was unmoved.

“The Statue of Liberty means nothing to me,” Ilse recounts in the book “Refuge Denied,” by Sarah Ogilvie and Scott Miller, researchers at the U.S. Holocaust Memorial Museum.

The tragic fact is sending the St. Louis back to Europe was not a criminal act.

At the time, neither international nor U.S. law protected asylum seekers. Instead, the ship’s 937 passengers, most of whom were Jewish refugees fleeing the Holocaust, found neither protection nor pity.

First, the Cuban government refused to let them disembark. Then, the U.S. government would not allow the ship to approach Florida. Finally, on June 6, 1939 — 78 years ago this week — the U.S. turned the ship away, knowing it was returning over 900 Jews to Nazi Germany.

Only during the voyage, thanks to negotiations by the American Jewish Joint Distribution Committee, did the U.K., Holland, Belgium and France agree to accept the passengers who had been refused landing by both Cuba and the United States. Yet there was no happy ending, as the Nazis occupied three of those four countries. Ultimately, 254 of the ship’s passengers perished during the Holocaust.

The story of the St. Louis’ fateful journey has haunted me throughout my career in public service, both in the U.S. government and as the head of a global Jewish nonprofit that protects refugees. During the administration of George H.W. Bush, I worked for the U.S. Immigration and Naturalization Service, where a political appointee famously instructed us: “When developing policy for the treatment of refugees and asylum seekers, we should always be asking one question: Would this have saved the people on the St. Louis?”

It became a type of litmus test for us — we wouldn’t turn our back on the world’s most vulnerable. We would live up to the American ideals inscribed on the Statue of Liberty’s tablet. We wouldn’t repeat history.

And yet, here we are again. Today, despite our cries of “Never Again,” people are still fleeing for their lives. They are trapped inside murderous regimes with no respect for human rights, and too often the rest of the world seems content to leave them there, despite the international laws developed after the Holocaust to ensure that never again would refugees be returned to their persecutors.

Today, our government is failing the basic litmus test born of the great wrong done to Ilse, her family, and her fellow passengers on the St. Louis. Rather than protecting the vulnerable refugees who need our help, our government is attempting to set new legal precedents to bar refugees from the U.S.

In the days following President Trump’s first executive order barring refugees and travelers from seven Muslim-majority countries, scores of people waited at airports across the country, unsure if their documents would allow them on U.S. soil, not unlike Isle’s family and hundreds of others who were on board the St. Louis, just within reach of freedom.

In the years since the Holocaust, we vowed to do more, but today the White House is saying that America will do less, and has sought to cut admission for refugees by more than half.

As Ilse said, reflecting on the moment when the United States turned the St. Louis back to Europe, “There are two faces to America. Most Europeans only knew the good face. We saw the cruel face of America.”

I had hoped that the shame of that failure would have inspired us to do better today. Instead of rising to meet this new crisis as our ideals would demand, it seems the U.S. is once again prepared to show that cruel face to vulnerable refugee families who, like Ilse and her family 78 years ago, yearn only for safety, for a place where they can simply breathe.

Let’s show refugees America’s good face before it is too late.

(Mark Hetfield is president and CEO of HIAS, the global Jewish nonprofit that protects refugees)