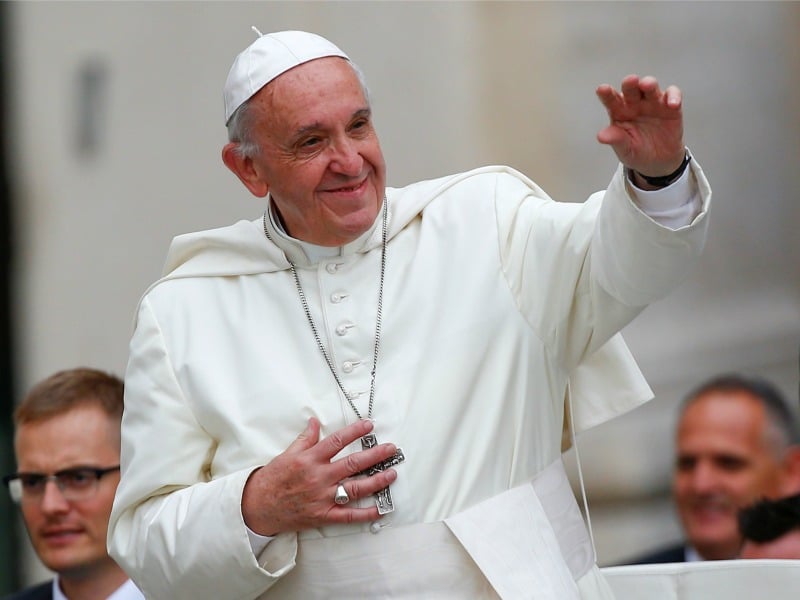 VATICAN CITY (Reuters) Pope Francis elevated five senior clerics from outside Italy and the Vatican to the top rank of cardinal on Wednesday (June 28), urging them to be humble and not forget refugees and victims of war, terrorism and injustice.

Appointing new cardinals is one of the most significant powers of the papacy, allowing a pontiff to put his stamp on the future of the 1.2 billion-member church.

Cardinals are the pope's closest advisers in the Vatican and around the world and those under 80 years old are known as "cardinal-electors" because they can choose his successor.

The new cardinals come from Mali, Spain, Sweden, Laos and El Salvador, and all five are under 80 years old. All of those countries, except for Spain, are getting their first cardinal.

RELATED: Pope names five new cardinals, all from outside Italy and the Vatican

With their elevation at a ceremony, known as a consistory, in St. Peter's Basilica, Francis has now named nearly 50 cardinal-electors of a total 121.

During the ceremony where the new cardinals received their red hat, known as a biretta, the pope said they were called to be humble servants of others and not "princes of the church."

They had to "look at reality" and care for "the innocent who suffer and die as victims of war and terrorism."

They should combat "the forms of enslavement that continue to violate human dignity even in the age of human rights; the refugee camps which at times seem more like a hell than a purgatory; the systematic discarding of all that is no longer useful, people included."

The church in Mali has denied recent French media reports about alleged irregularities concerning a bank account reportedly held by the Mali church in Switzerland. A statement this month denied that it was involved in embezzlement but did not comment directly on the Swiss bank account.

The fact that none of the five are Italian and none hold Vatican positions underscores Francis' conviction that the church must be a global institution that should become increasingly less Italian and Europe-centric.

It was Francis' fourth consistory since his election in 2013 and he has used each of them to show support for the church in countries where Catholics are in a minority, in this case Sweden, Mali and Laos.

Chávez, the new cardinal from El Salvador, was a close associate of Archbishop Oscar Romero, who was assassinated by a right-wing death squad in 1980. Francis is keen to see Romero made a saint during his pontificate.

The naming of Arborelius, the Swede, was significant because Sweden is where the Lutheran World Federation was founded in 1947 and because this year marks the 500th anniversary of protestant Martin Luther's Reformation. Francis, who visited Sweden last year, is eager to further Catholic dialogue with Protestant churches.

Sweden is also one of the world's most secular countries, and the naming of a cardinal there will boost the morale of the tiny Catholic population.

After the ceremony in the basilica, the new cardinals went to pay their respects to 90-year-old Pope Emeritus Benedict XVI, who resigned in 2013 and is living on the grounds of the Vatican.