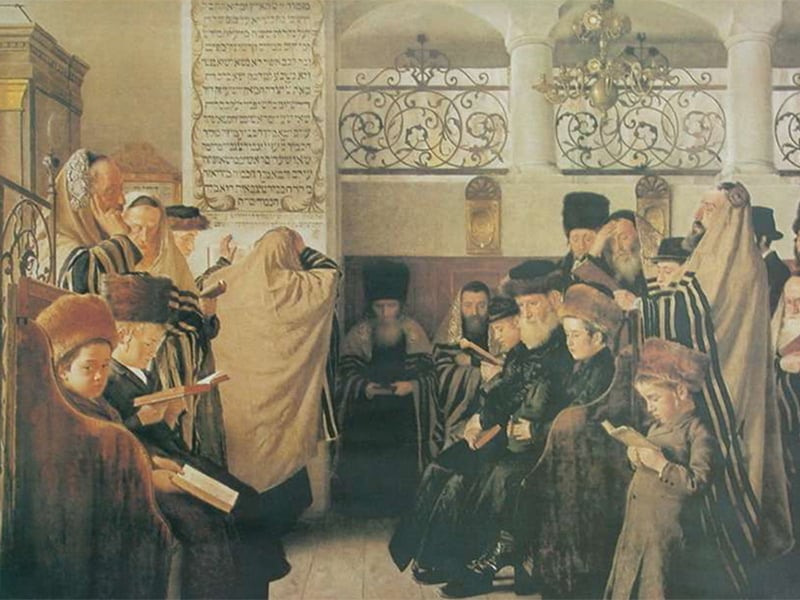 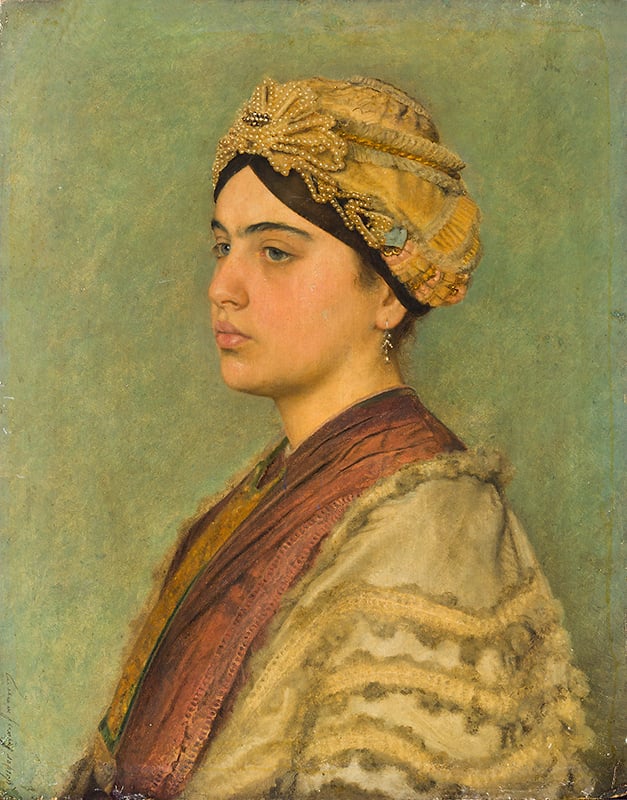 NEW YORK (RNS) She is serene and dignified (perhaps even a little bored).

Her eyes are slate blue and her lips bee-stung. She wears the marriage finery of early 20th-century Orthodox Judaism: a fur-trimmed cape, satin bib and a tiara boasting 300 small pearls.

Despite her humble status — other Jews at the time would have regarded her Hasidic family as backward — she is obviously a woman of means. And 112 years after first being painted, her image still commands the room — as the premiere offering at Kestenbaum and Company, an auction house in Manhattan devoted solely to a full spectrum of Judaica. Her estimated price: $200,000 to $300,000.

Daniel Kestenbaum, the house’s founder and owner, gives the room a quick glance. In addition to phone and internet bidders on this spring day, there are around 50 people attending, most of them men wearing skullcaps, which suggest they may be Orthodox.

One tall gentleman sports a wide fur headpiece of a style dating back even before the painting.

“At Sotheby’s, an Andy Warhol is going to bring in a lot more,” remarks Kestenbaum of his far larger competitor. “Here,” he looks fondly at the Bride, “she’s a star.”

The market and the Jewish market

There is the art market and then there is the market for explicitly Jewish art.

One is big and rich and over-observed. The other is little-known and intense, and as riddled with irony as Jewish history. There are few better examples of this than the career, during his lifetime and afterward, of Kaufmann, an assimilated Jew who had a kind of artistic conversion experience 123 years ago, and first got rich selling paintings of Jews very unlike himself to Jews like himself.

Born in 1853 in Arad, Hungary, Kaufmann seems to have had little Jewish education; as an adult he was nonreligious. A local aristocrat bankrolled his training, and he made his way to Vienna, the Austro-Hungarian Empire’s cultural capital.

There he joined a group of artists specializing in genre paintings: sentimental or humorous scenes of city life. From the start he seems to have created a subspecialty in Jews, painted in stock roles such as street vendors, often satirically.

Then in 1894 Kaufmann changed course.

That summer he took the first of dozens of sketching trips across the monarchy to communities of traditional Jews, predominantly adherents of the populist mystical variant, Hasidism.

The Hasids, many recently expelled from Russia, occupied the bottom rung of the Jewish social ladder: often poor, frequently persecuted, and regarded as superstitious rubes by co-religionists.

But Kaufman’s canvases — dozens of bearded rabbis, side-curled youths and even weather-beaten synagogues — had a subtle luminousness that conveyed his subjects’ aspirations and his respect for them as much as their day-to-day reality. 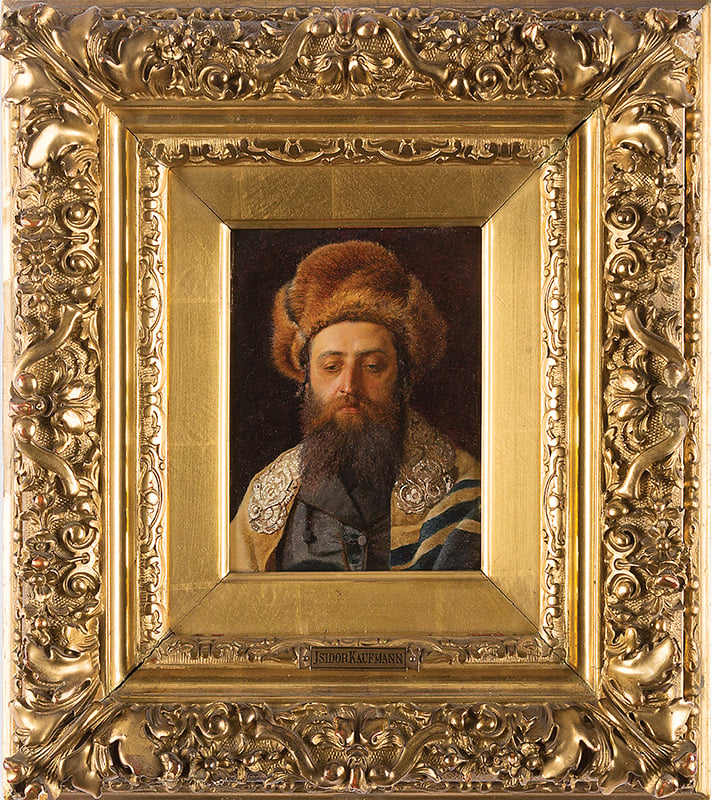 He logged the most time in the bustling West Ukrainian city of Brody, known then as the “Jerusalem of Galicia” for its mostly Jewish population.

Such towns, he wrote, were his "Promised Land … (s)ince it was my conviction that the strength of every artist is rooted in his own people. I strove to reveal its beauty and its nobility and tried to make the traditions … accessible for Gentiles as well.”

He succeeded: The Austrian emperor Franz Josef bought one of his Hasidic paintings.

But a larger part of Kaufmann’s clientele was Jews. Not his subjects, who lacked money and perhaps interest; but what Kestenbaum calls “irreligious Jewish bourgeoisie,” like Kaufmann.

If it’s hard today to imagine a Reform Jewish household with a painting of a Hasid on the wall, connections within the larger Jewish community were once closer. The buyers also saw the portraits as commemorative. As one dealer puts it, the Hasids represented a way of life “that they thought was going to disappear.”

They nearly did, if not in a way the doubters could have imagined. “Friday Evening” by Isidor Kaufmann from 1920. Image courtesy of The Jewish Museum

Kaufmann did extremely well. Shortly before his death in 1921, one of his works sold for what a contemporary wrote was probably the highest price achieved by a “modern master in Vienna.” But his Promised Land was liquidated. Brody had already been burned down twice. Twenty-two years later the Nazis finished the job, wiping out most of the towns, and the people, Kaufmann had visited.

Jump to the present. Kestenbaum has owned his auction house since 1995 and was in the business before then. He testifies that “Kaufmanns” never stopped selling. Then about 10 years ago, he said, a new group of buyers emerged.

“The fervently Orthodox Jews, the haredi, they’re in on it now,” he said, referring to the term used to describe strictly observant Orthodox Jews. That is, the people Kaufmann used to paint.

When the Hasidic survivors arrived in the States in the late 1940s, art was a low priority.

“They were busy putting their world back together,” said Leon Goldenberg, whose father was Hasidic, of his parents’ generation.

The immigrants’ only art purchases were ritual objects like menorahs and ceremonial cups. Hasidic Jews might display a photograph of their spiritual leader, or rebbe.

Goldenberg, a Brooklyn businessman and Jewish activist, now owns a Kaufmann, and many other pieces of Jewish art. Not only did the ultra-Orthodox sustain their insular cultures, “people became more affluent, which meant they had bigger homes, and more wall space,” said Shmuel Pultman, owner of the Betzalel Gallery in Crown Heights.

The new patrons overcame the inhibition that portraits sinned against the commandment forbidding graven images. But they limited themselves to Jewish subjects. Kaufmanns, said Abigail Meyer, head of Kestenbaum’s fine arts department, were “the Lamborghinis” of the market.

“Portrait of a Young Jewish Bride” (whose clothing is authentic but whose actual model was Kaufmann’s daughter) is the first item up for auction. Bidding quickly climbs over $100,000.

The auctioneer, Kestenbaum’s son Zushye, eventually gavels it down at $230,000. This is nowhere near the maximum spent for a Kaufmann — $772,000 at Sotheby’s in 2006 for a much more ambitious painting. A better comparison might be an almost identical Kaufmann Bride that Kestenbaum said sold in 1982 for a mere $18,000.

The buyer of the "Young Jewish Bride" is ultra-Orthodox, but prefers not to be identified. So does a third owner of a Kaufmann, but he was willing to share his thoughts. He owns one of the artist’s bar mitzvah boys.

“There’s such a sweetness to it, and maybe also a little sad. I love to walk into the room. Sit down. Just look at it.”