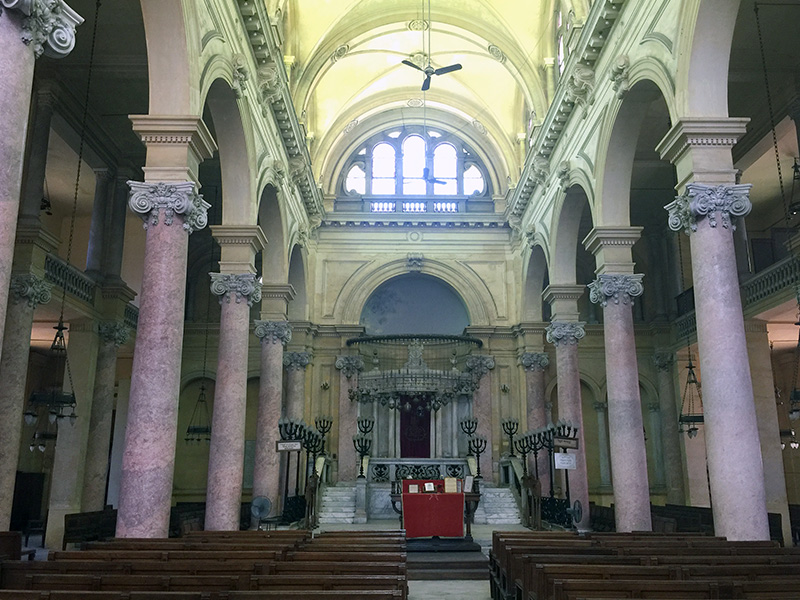 The 700-seat Italianate synagogue is one of four buildings on a compact city block that once comprised the Jewish community living in Alexandria’s historic center, including a three-story school, a community center and two residential buildings. RNS photo by Jacob Wirtschafter
July 27, 2017
Yonat Shimron

ALEXANDRIA, Egypt (RNS) — A $2 million restoration of Egypt’s largest synagogue is the start of a government effort to keep alive the legacy of the Jewish community, whose members have largely left for Israel, France and elsewhere since the middle of the last century.

“We are experiencing a renaissance,” said Samy Ibrahim, vice president of the Cairo Jewish community, which, like the one in Alexandria, counts a population of less than a dozen members. “The government is elevating the profile of the heritage of Egyptian Jews.”

Ibrahim spoke on Tuesday (July 25) as Joshua Shamsi, a Connecticut-based photographer, met with him and other members of the Egyptian Jewish community in the Prophet Elijah Synagogue in Alexandria (sometimes called Eliyahu Hanavi Synagogue) to draw up plans for a comprehensive visual survey of their synagogues, schools and cemeteries.

“Something important is happening in Egypt,” said Shamsi, who has documented abandoned heritage sites in Morocco, Tunisia and Iraq for Diarna, an American online “geo-museum” of Middle Eastern Jewish life. “Doors closed before are now opening.”

Last week, Minister of Antiquities Khaled El-Enany announced his agency would fund the restoration of the Prophet Elijah Synagogue, including repairing the rain-damaged roof of the women’s gallery.

The 160-year-old structure is itself an 1850s-era restoration of a sanctuary damaged when French forces bombarded the Mediterranean port city. Egyptian King Muhammad Sa'id Pasha paid for the work at the time.

The 700-seat Italianate synagogue is one of four buildings on a compact city block that once comprised the Jewish community living in Alexandria’s historic center, including a three-story school, a community center and two residential buildings. Today, non-Jews occupy most of the apartments.

“Rent from the apartment buildings no longer can pay for the upkeep of the synagogue,” said 81-year-old caretaker Abdel Nabi, a Muslim who has overseen the facility’s maintenance for four decades. “Inshallah (God willing), the men from the construction company will be starting the job next week.”

The push is in line with Egyptian President Abdel-Fattah el-Sissi’s attempts to court Coptic Christians and emphasize Egypt’s “diversity” in response to a series of deadly bombings in minority communities, mostly by the Islamic State group.

READ: Egyptian Copts prepare for Easter amid rising fears for their safety

“This is part of Egypt’s national heritage, and what we are doing is encouraging understanding among religions and respect of the other,” said Ibrahim, explaining why the government has authorized the new Jewish charity even as human rights groups accuse authorities of cracking down on civil society in other spheres of life.

Islamists have criticized the effort.

Mohammed Nasser, an exiled Muslim Brotherhood supporter in Istanbul, denounced the Alexandria synagogue restoration and accused el-Sissi of taking money from Israel and “Jewish members of the American government” on Mekameleen TV, a pro-Brotherhood outlet supported by Turkish authorities.

In fact, Egypt has rebuffed Israeli efforts to fund the restoration of Jewish heritage sites. Even though Israel and Egypt formally signed a peace accord in 1979, relations have remained cool.

But Cairo has engaged with U.S. government officials and Jewish American organizations concerned with the preservation of synagogues and cemeteries and allowed them to fund Egyptian groups.

“Cairo has made some intelligent moves recently,” said Roger Bilboul, 75, a Jewish Alexandria native who advocates for the community’s interests from France. “They have organized a charity to look after the Jewish heritage in Egypt and the members of the board of that charity don’t have to necessarily be Jews. They are cultivating a support network to maintain the sites and an interest in our culture, even after the last member of the Jewish community passes away.”

Among the groups receiving American money was Drop of Milk, a registered nonprofit co-founded by Ibrahim and Cairo Jewish community President Magda Haroun. The group aims to maintain synagogues with the goal of opening them as arts and community centers for all Egyptians. The American Research Center in Egypt recently awarded Drop of Milk $51,000 to document and register 13 synagogues and their contents in Cairo.

Haroun, 63, is the youngest of the six women remaining in a community that once numbered 75,000 when the first Arab-Israeli war broke out in 1948. Many other Egyptian Jews who remained in the country converted to Islam or Coptic Christianity or are the offspring of interfaith marriages who might not consider themselves Jewish.

“The Egyptians made it clear that they were not interested in a formal partnership with global Jewish groups,” said Rabbi Andrew Baker, international Jewish affairs director at the American Jewish Committee.

In Cairo, the U.S. Embassy has been relaying concerns in Congress over the years about some of the more dilapidated Jewish sites and worked with Baker and other American Jewish leaders to offer support for restoration efforts.

“We believe that Egypt’s unique Jewish heritage, like its Muslim and Christian heritage, is an indelible part of the country’s history,” said a senior U.S. diplomat in Cairo who asked not to be identified. “The U.S. partners with the government of Egypt and the private sector on projects that help preserve cultural and religious heritage sites, including mosques, churches and synagogues.”

Baker has visited Egypt six times over the past decade to meet with local Jewish leaders and government officials who eventually agreed to release public funding and welcome indirect help for the work.

“The attention these efforts brought to the subject led Egyptian authorities to a position that claimed Jewish sites as Egyptian heritage and to say we will do these things ourselves,” Baker said. “That’s a good outcome.”

(Jacob Wirtschafter is a reporter based in Cairo)