HAGÅTÑA, Guam — It started off innocently: a 15-year-old boy helping out at San Miguel, a local church named for Archangel Michael.

There was yardwork and cleaning, followed by invitations to the rectory to eat and watch TV. Soon, there were offers to drink sacramental wine and watch X-rated movies. Then sexual assault.

More than 50 times over three years.

By the parish priest.

Those jarring allegations come from a recent lawsuit claiming assault from 1985 to 1988. It is one of nearly 100 lawsuits that describe rampant child sexual abuse by some of Guam’s most revered men: the Catholic clergy.

An investigation by the USA Today Network’s Pacific Daily News unearthed allegations of decades of assault, manipulation and intimidation of children reared on this remote, predominantly Catholic U.S. territory.  Among the accusations: a boy fondled on the way to his grandmother’s burial, and another molested for the first time on his seventh birthday, then raped or assaulted 100 more times.

The children’s steadfast faith in the island’s priests made them vulnerable, the lawsuits say. Accuser William Payne’s parents “had raised him to honor and respect the priest, and told him that he had to do what the priest told him to do,” according to his lawsuit.  He had “been instilled with the belief that clergy are never wrong, and that the clergy were like Jesus.”

The lawsuits and other public statements collectively claim that priests preyed on children for nearly four decades.

Archbishop Anthony Apuron, 13 Guam priests and others, including a Catholic schoolteacher, a Catholic school janitor  and a Boy Scout leader, are alleged to be sexual predators. Guam’s Archdiocese of Agana is a defendant in 96 lawsuits.

The complaints detail alleged attacks from 1955 through 1994 and claim some religious leaders knew of the exploitation and ignored it. One retired priest, who admitted in an affidavit that he sexually abused 20 or more boys, still receives a monthly stipend from the archdiocese.

The accusations also ensnare the Boy Scouts of America, where that priest also served as a scoutmaster. The scouting group is named as a co-defendant in 52 lawsuits.

While clergy abuse is well-documented elsewhere in the U.S. and in cities around the world, a similar pattern of allegations in Guam has gone largely unnoticed outside this tiny island. The accusations only recently caught the attention of the Vatican.

In June 2016, Pope Francis suspended Apuron, who has since been accused in four lawsuits of sexually abusing four altar boys in the 1970s. The Vatican is now trying him in a secret procedure that could lead to him being dismissed from the clergy, also known as being laicized.

Apuron has denied the abuse charges via statements on video and through written statements issued by the archdiocese. His attorney has filed motions to dismiss lawsuits against him.

Apuron’s Vatican trial is “very, very rare, and the reason it’s rare is because the Vatican or the popes have protected the bishops,” says Dominican priest Tom Doyle, a specialist in canon, or church, law who advocates for abuse victims.

Complaints against the Boy Scouts say the group ignored the priest abuse and enabled clergy to prey on young boys.  At times the church required Guam altar boys join the Boy Scouts, and Boy Scouts were encouraged to serve in the church, according to lawsuits.

The Guam lawsuits join a steady stream of accusations against Catholic clergy. In June, Pope Francis aide Cardinal George Pell was charged with “historical sexual offenses” by authorities in his native Australia. Pell denied the charges.

The Boston clergy sex abuse scandal is one of the most high-profile examples of clergy abuse.  Yet, Guam’s sexual abuse controversy appears to have seeped more deeply into its smaller community. The population of Guam — an island about 3,800 miles west of Hawaii — is fewer than 163,000 people.

The accusations touch the personal and professional lives of many here. All eight of Guam’s trial court judges, for instance, have recused themselves from at least some lawsuits, saying they have familial or business ties to either the plaintiffs or the defendants, court documents show.

Attorneys for the archdiocese, Apuron and the Boy Scouts, as well as two accused clergy members have filed motions to dismiss the lawsuits, arguing that the law lifting the statute of limitations for civil claims in child sexual abuse cases is unconstitutional. 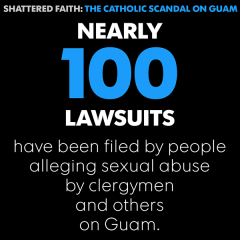 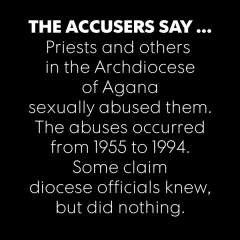 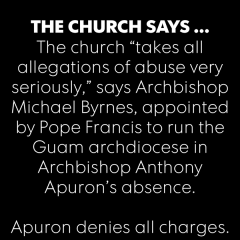 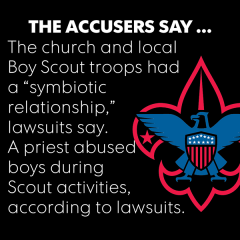 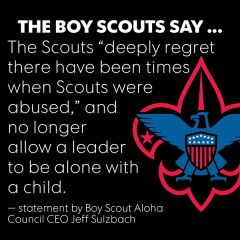 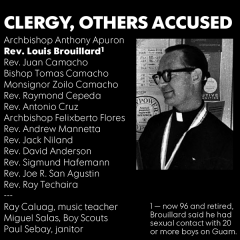 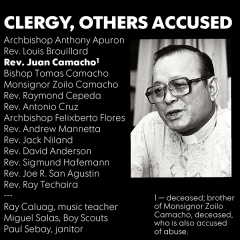 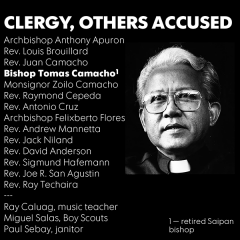 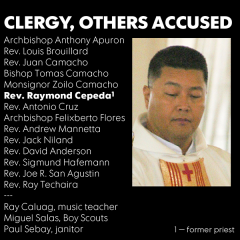 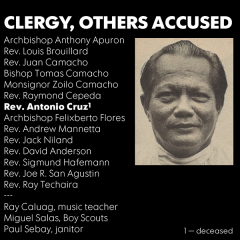 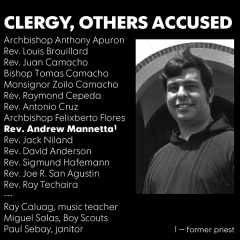 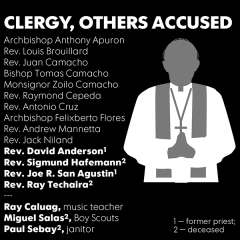 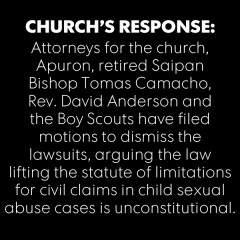 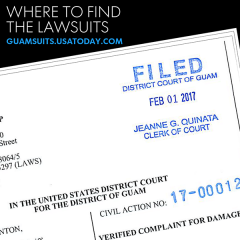 The archdiocese has said it takes all allegations “very seriously.”

“We care deeply about every person who steps forward and we look forward to a full resolution of all cases,” the archdiocese said in a July 28 news release.   The Vatican didn’t reply to requests for comment.

The Boy Scouts “deeply regrets that there have been times when scouts were abused” and has developed safeguards, such as not allowing a leader to be alone with a child, scout Aloha Council CEO Jeff Sulzbach said in a statement.

The lawsuits filed in the District Court of Guam and the Superior Court of Guam claim pervasive incidents of abuse.  Some examples:

Brouillard has been named as an abuser in 55 lawsuits. He admitted in an affidavit in October 2016 that he sexually abused 20 or more boys on the island.

Reached by the Pacific Daily News by phone after he was named as an abuser in a Guam Legislature hearing last summer, Brouillard said “it’s possible” he abused altar boys on the island.

Brouillard hasn’t filed a legal response and couldn’t be reached for additional comment.

The Archdiocese of Agana still provides Brouillard, 96, with a monthly stipend of $550.

Do what the priests say

Catholicism has long been an integral part of life on this Western Pacific island.

“Since the 17th century, Catholic churches have been the center of village activities,” proclaims the Guam Visitors Bureau on a website describing the culture of its native Chamorro population.

About 85 percent of its residents are Catholic, populating 26 parishes on an island just 30 miles long.

Some accusers say they were too terrified to tell their devout parents, while others told adults but weren’t believed, according to the lawsuits.

In at least two lawsuits, accusers said the abuse was reported to local police decades ago. However, the Guam Police Department recently said it has no record of the reports, which would not have been retained because the statute of limitations for criminal prosecution passed long ago.

“I was told outright that victims were scared that they would be shunned from their families, kicked out of the church, lose their jobs, or that by speaking out against the church or Apuron, they would threaten the financial security of their loved ones,” Casteix says.

Power beyond the pulpit

Apuron, the second native Chamorro archbishop and once an altar boy himself, led the Catholic faithful here for three decades.

He readily used his stature as spiritual leader to help shape political decisions. In one instance, he threatened to excommunicate any Catholic lawmaker who voted against a measure that outlawed all abortions except when necessary to save the life of the mother.

Yet, in recent years, Apuron faced detractors who criticized him for how he handled church real estate and finances. In December 2014, disgruntled civic leaders formed Concerned Catholics of Guam, a nonprofit group that called for greater financial transparency from the archdiocese and for Apuron’s resignation.

In May 2016, Concerned Catholics ran a full-page ad in local newspapers including the Pacific Daily News urging sexual abuse victims to come forward. The ad listed specific dates and locations, each corresponding to Apuron’s service dates and parishes.

Nine days after the Concerned Catholics ad came out, Quintanilla, one of Apuron’s accusers, held a news conference to accuse the archbishop of molesting him. Then Doris Concepcion, the mother of former altar boy Joseph “Sonny” Quinata, said in an interview that soon before Quinata died, he told her Apuron abused him.

On June 6, 2016, Pope Francis stripped Apuron of his administrative authority and installed a temporary apostolic administrator, Archbishop Michael Byrnes of Detroit to run the Guam archdiocese.

The Vatican tribunal’s discovery phase of Apuron’s trial has ended, and a group of judges are deliberating on his fate.

Last week, a federal judge agreed to temporarily halt proceedings in most of the clergy sex abuse lawsuits so they can go through an out-of-court settlement process. The church’s financial arm has identified dozens of its island properties that could be sold to help finance the settlements. The church also has set up a “Hope and Healing Guam” initiative to provide counseling for victims.

Some still have faith

Some lawsuit plaintiffs say the alleged abuse damaged their spirituality, and at least one abandoned the Catholic Church.

Yet, many retained their religious beliefs.

On the island, resident Mae Reyes Ada, 74, says she sometimes feels embarrassed and guilty that she did not speak up when she first heard rumors of clergy abuse in the 1970s. “The mentality at the time was you don’t say anything bad about the church and the priests,” she says, adding that she didn’t have proof.

“We should have, and we could have, done something a long time ago,” says Ada, who joined the peaceful protests to have Apuron permanently removed from the clergy.

Despite the scandal, she says, her religious conviction has only intensified.

“The church is going through purging and cleansing,” she says. “It takes somebody with a strong faith to fight this war.”

And one young island resident — born after the alleged abuse took place — stands ready to make sure the church flourishes.

“I’m here to help these people in their fight against the evils that have infiltrated our church,” Jaden Comon, 14, said during a July protest to have Apuron removed.

Comon’s aspiration: to become a priest.

“As young people, we are the future of the church,” he says. “It’s our responsibility, especially when we were baptized in the faith, to come and help.”