WASHINGTON (RNS) — Yom Kippur, the most solemn day of the Jewish year, may not seem the sort of holiday to observe in a beer garden.

But more than 100 Washington-area Jews are doing just that this year, taking a holiday that calls for introspection, fasting and intense prayer — to a bar. 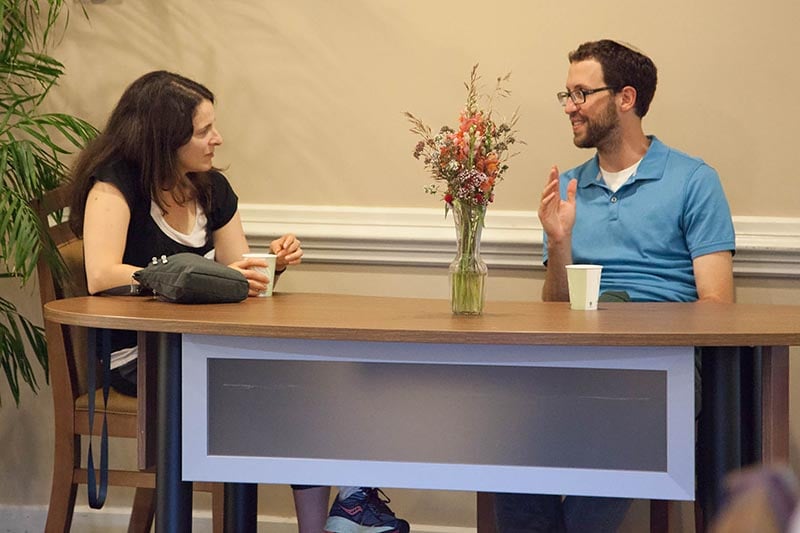 Sarah Hurwitz and Aaron Potek at the Beyond the Tent Retreat in July 2016 at Pearlstone Retreat Center in Maryland. Photo courtesy of Josh Orozco

Surprising as it might sound, a Yom Kippur service in a beer garden actually builds upon rabbinic tradition, according to Potek, an Orthodox rabbi. The Bible refers to the holiday in plural as “Yom Kippurim,” which can be read in Hebrew as “like Purim.”

Purim is the holiday that draws upon the Book of Esther, and some consider it a sort of Jewish Halloween — a time to dress up and get a little silly while listening to the story of the triumph of the Jews over their oppressor.

The GatherDC service, for which at least 110 people have already paid the $18 ticket fee, will borrow from Purim’s topsy-turvy spirit. “Let’s channel that on Yom Kippur, too,” Potek said. “Yom Kippur in a bar — what’s more upside-down than that? By shaking things up, we might surprise ourselves and discover something new.”

Shaking things up is necessary, because fasting and prayer have been overemphasized on Yom Kippur, said Potek, who received rabbinic ordination from the New York-based Yeshivat Chovevei Torah. The envelope-pushing Orthodox rabbinical school has come under criticism from more traditional quarters of Orthodox Judaism, which takes Jewish law more literally than Reform, Conservative and other streams of Judaism.

Fasting and prayer can distract from the spirit of the day, during which Jews are supposed to question whether they are living the lives they ought to be, according to Potek, who said that many synagogue attendees don’t understand the Yom Kippur services.

“Will you find a personally meaningful answer at a beer garden?” Potek asked in a recent blog post.

Potek will not bring a Torah — the scrolls of the Hebrew Bible — or High Holy Day prayer books to his service. Attendees will not be expected to fast, though Potek will, and — if a similar service he led two years ago is an indicator — about half the attendees will opt to fast anyway.

What the beer garden service will offer is time for personal reflection and meditation. There will be musical interludes, text-based study and the pairing up of congregants to share thoughts. He and Hurwitz will each give talks.

Potek’s efforts to forge an alternative place for people to try new and potentially meaningful approaches to Yom Kippur resonate with Hannah Goldstein, associate rabbi of Washington’s Temple Sinai, which belongs to the Reform movement, the largest in Judaism.

But Goldstein disagrees with Potek’s view that prayers can’t be meaningful to nonexperts, who don’t grasp their nuance.

“For some, the embodied experience of fasting is a peak spiritual moment of the year. For others, the prayers and melodies orient them in time and evoke the fear and awe of Yom Kippur, even if they don’t understand every word,” she said.

Temple Sinai recently added an “alternative service,” with both traditional and new melodies. “We present the liturgy in a way that enables families to worship together,” Goldstein said. “Many have happily commented that it is a far cry from the services of their youth.”

To Goldstein, prayer and fasting are tools. “Sure, you could spend the day fasting, or sitting in synagogue without reflecting at all, but I don’t think that means that these methods are inherently broken,” she said.

Neither Goldstein nor Potek think they are competing for Jewish souls, although this year’s GatherDC event promises to eclipse the alternative Yom Kippur service Potek hosted two years ago, which drew 15 people.

Potek said most of them came from traditional services. No food was served then, nor will it be this year. If attendees bring food, they will be asked to eat inconspicuously, he said.

Harris Cohen, a Modern Orthodox Jew — meaning he identifies with the more progressive branch of traditional Judaism — is a Washingtonian who endorses alternative ways of making Judaism more accessible. But he said isn’t comfortable with an event that makes eating on Yom Kippur acceptable.

“Everyone knows that Yom Kippur is the holiest and most solemn day of the year, when Jews refrain from eating or drinking, and even most secular Jews will fast,” said Cohen, vice president of the Orthodox D.C. synagogue Ohev Sholom, who spoke personally and not on behalf of his congregation.

“Having an event in a beer garden — the implication is that food and beverages will be served — on Yom Kippur is highly inappropriate and crosses the line of acceptability,” he said. “To me, this is a mockery of our traditions.”

Potek has crossed so far over the line that perhaps Chovevei should consider revoking his smicha, or rabbinic ordination, Cohen wondered.

That doesn’t seem to be in the cards for the rabbinical school, which is standing behind its graduate.

“For the record, no beer or food will be served at that service. It is a way of providing an environment that is less intimidating for many Jews then a synagogue is, especially on the High Holidays,” says Asher Lopatin, a rabbi and president of Chovevei.

Rituals, although vital, are “gateways” to deeper principles, and Orthodox Jews need to work harder to make sure they function as such rather than as barriers, according to Lopatin.

“Ultimately, fasting, which is a requirement of the day, of course, is a powerful gateway to the deeper ideas of the holiday, but we have a lot of work to do with the broader Jewish community and with ourselves to connect the two — the ritual to the deeper ideas and to the change which must occur on this day for it to really work,” he said.

Potek doesn’t think anyone should view the alternative Yom Kippur event in terms of Conservative, Orthodox or Reform Judaism — the three largest branches of Judaism.

And ultimately, he hopes his Purim-infused Yom Kippur service will be a bit less solemn and intimidating. “I think by hosting this experience in a bar, we are highlighting this more joyous aspect of Judaism, and of Yom Kippur, which is actually ‘ki-Purim’ — like Purim,” he said.