(RNS) — One of the grossest aspects of social media is that it turns every celebrity death into a springboard to blog about our own personal feelings.

Well, I usually try to stay away from that kind of thing, but today found myself sucked into one such discussion when I saw a very pro-Trump conservative Christian friend use the occasion of Hugh Hefner’s death to make a political point.

He was trying to highlight what he considers “leftist” hypocrisy, by accusing liberals of being mad at Donald Trump for being a womanizer while at the same time eulogizing Hefner for his progressive views on sex.

But from where I sat, it was conservatives — like said Facebooker — who were forcing the comparison. So I responded: Actually the “rightist” narrative I’m seeing everywhere is, “Hefner ruined our society with his terrible sexual ethics. Go Trump!”

The Facebooker responded, then his friends responded, and within a few minutes there were dozens of likes and responses from Trump supporters who thought it was the easiest thing in the world to defend Trump’s sexual history while excoriating Hefner for his.

I am so beyond confused with Christians who are screaming about how terrible Hugh Hefner’s sexual ethic was for society, and yet brought themselves to vote for and continue to support Trump.

In many ways, both men objectified women, but I honestly think Trump was worse about it. Some have pointed out that while Trump’s sexual indiscretions were momentary, Hefner’s were a lifelong habit. But Trump, decades-long owner of beauty pageants, has repeatedly and consistently bragged about the sexual behavior he’s “gotten away with” over the years with various women, who, according to his own admission, did not always consent to his advances — if we can even call unwanted groin-grabbing an “advance.”

In a cringeworthy exchange with Access Hollywood’s Billy Bush, Trump bragged about “moving on” a married woman “like a bitch.”

Back in 2005, Trump regaled Howard Stern with tales of how he would ogle young women changing backstage at his pageants: “I’m allowed to go in because I’m the owner of the pageant and therefore I’m inspecting it,” he told the radio host. “You know, they’re standing there with no clothes … and so, I sort of get away with things like that.”

Just this week, 15 hours of Stern/Trump banter were posted online for the world to hear. Some of Trump’s most colorful sexual remarks include joking about owning shares in rubber (get it? condoms, lol), “feeling up” his wife in public, “banging some of the greatest beauties on the planet,” an assessment of Kim Kardashian’s “huge trunk,” and arguing that his daughter Ivanka is “much better looking” than Charlize Theron.

Speaking of his daughter: You might recall Trump saying it’s OK to refer to Ivanka as a “piece of ass,” and suggesting that he’d probably be dating her if it weren’t for the whole having the same genes thing.

This is a pretty long list of what we might rightly call “sexual indiscretions” or “perversities.” So you can imagine all the eyebrow-raising I did while reading post after post lambasting Hefner written by people … who literally … adore … Trump.

It just seems like there’s cognitive dissonance going on here. If you believe the objectification and sexualization of women are bad for society, then why would Trump be your candidate?

The only difference I can see between Christian treatment of the two men is that Trump persuaded white evangelicals to vouch for his character. It didn’t matter that Trump has denied asking God’s forgiveness, not wanting to bring God “into that picture,” or that he proudly pledges to hit back 10 times harder against anyone who first hits him. (Astute readers will spot the big difference between Trump’s maxim and the one we learned from Jesus and also our preschool teachers.)

All of this brings us back full circle to the relationship of Hugh Hefner and Trump, which is forever memorialized in a picture of a picture. 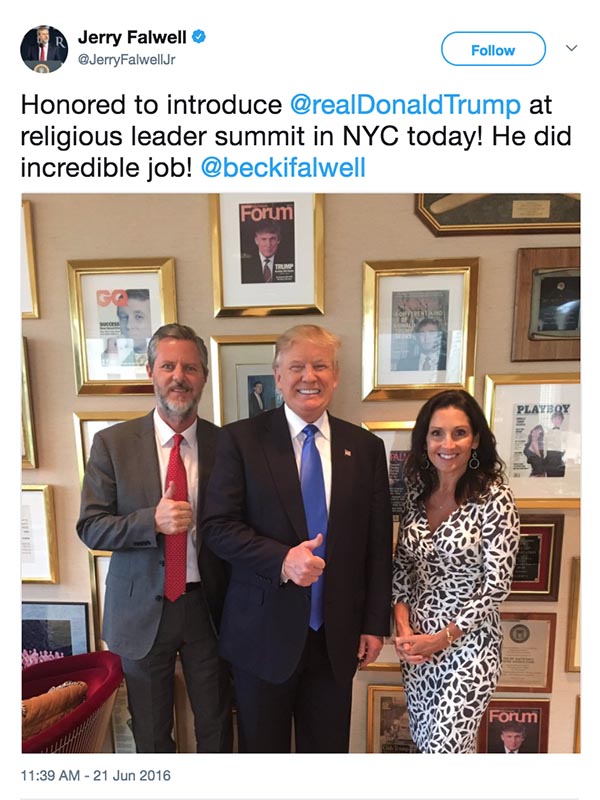 Jerry Falwell Jr., evangelical Christian leader and son of televangelist Jerry Falwell, tweeted a photo of himself and his wife, Becki, with Donald Trump on June 21, 2016.

In the months leading up to the election, Jerry Falwell Jr., perhaps Trump’s most loyal evangelical supporter, tweeted out a picture of him and his wife posing with the reality star in his office. Hanging on a wall behind them is a framed March 1990 issue of Playboy featuring model Brandi Brandt posing with the man who became our very own POTUS.

In 1976, Falwell’s father, the Rev. Jerry Falwell Sr., condemned Jimmy Carter for granting an interview with Playboy, which the elder Falwell described as “a salacious vulgar magazine that did not even deserve the time of day.”

In some ways they have; in some ways they haven’t. Conservative Christians fighting for influence in the political arena are still harping on sex — but they’re pickier about it. A woman whose husband cheated on her? Hold that against her forever. Two men want to marry each other? That will always be sin! Public nudity? Not today, Satan!

But Trump’s well-documented and lifelong trail of treating women as sexual objects intended solely for his pleasure? Well, look, he’s our only hope of defeating the woman who brought us Benghazi so … it’s only Christian of us to forgive and forget.

Maybe they should’ve waited to get to know Trump a little bit before jumping into bed with him.