SALT LAKE CITY (AP) — A top Mormon leader reaffirmed the religion’s opposition to same-sex marriage on Saturday during a church conference — and reminded followers watching around the world that children should be raised in families led by a married man and woman no matter what becomes the norm in a “declining world.”

The speech by Dallin H. Oaks, a member of a top governing body called the Quorum of the Twelve Apostles, followed a push in recent years by The Church of Jesus Christ of Latter-day Saints to uphold theological opposition to gay marriage amid widespread social acceptance while trying to foster an empathetic stance toward LGBT people.

The Mormon church is one of many conservative faith groups navigating the challenges that arise from trying to strike the right balance.

“We have witnessed a rapid and increasing public acceptance of cohabitation without marriage and same-sex marriage. The corresponding media advocacy, education, and even occupational requirements pose difficult challenges for Latter-day Saints,” Oaks said. “We must try to balance the competing demands of following the gospel law in our personal lives and teachings even as we seek to show love for all.” 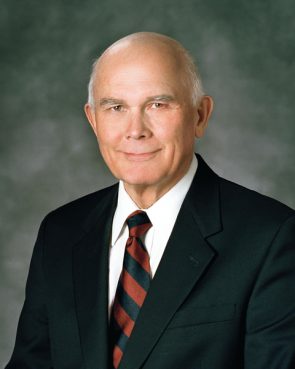 Dallin H. Oaks, a senior of member of the Mormon’s Quorum of the Twelve Apostles. Photo courtesy of The Church of Jesus Christ of Latter-day Saints

Oaks acknowledged that this belief can put Mormons at odds with family and friends and doesn’t match current laws, including the recent legalization of gay marriage in the United States. But he told members of the nearly 16-million member faith watching around the world that the religion’s 1995 document detailing the doctrine — “The Family: A Proclamation to the World” — isn’t’ a policy statement that will be changed.

He lamented that more children in the United States are raised in families led by unmarried mothers.

“Even as we must live with the marriage laws and other traditions of a declining world, those who strive for exaltation must make personal choices in family life according to the Lord’s way whenever that differs from the world’s way,” Oaks said.

That was interrupted in 2015 when the church adopted new rules banning children living with gay parents from being baptized until age 18 and clarifying that people in same-sex relationships are apostates. That policy drew harsh criticism from gay church members and their supporters, who considered it a major setback from recent progress.

A year ago, church leaders updated a website created in 2012 to let members know that that attraction to people of the same sex is not a sin or a measure of their faithfulness and may never go away. But the church reminded members that having gay sex violates fundamental doctrinal beliefs that will not change.

Brittany Krallis Stapf, a lifelong Mormon who lives near Spokane, Washington, with her husband and sons, was among church members who were disappointed in Oaks’ speech. In a phone interview, Krallis, 36, said she’s teaching her sons, ages 12 and 9, to be inclusive and loving to everyone and stick up for LGBT members.

“My heart was pounding. It is very difficult to hear an apostle give a speech you feel contradicts the message you’re trying to teach your children,” Krallis said.

She said she knows many Mormons from her generation who share her hope that church leaders will eventually soften on the issue.

The twice-yearly conference is proceeding without church President Thomas S. Monson, 90, who is dealing with ailing health. It’s the first time in more than a half century that Monson hasn’t spoken at the conferences. Before becoming church president in 2008, he served on the Quorum of the Twelve Apostles starting in 1963.

Monson has scaled back conference participation in recent years, and in May, church officials said that he was no longer going regularly to meetings at church offices because of limitations related to his age.

Church presidents serve until they die.

Monson is the first church president since 1994 not to attend and make at least one speech. But prior to that, it was fairly common for presidents to miss conferences toward the end of their lives.

Dieter F. Uchtdorf, one of Monson’s top two counselors, said Monson was watching from his home. “President Monson, we love you very much,” Uchtdorf said.

Also missing will be Robert D. Hales, 85, a top leader who was hospitalized in recent days.

Church leaders use the conference to deliver spiritual guidance to members and sometimes announce church news.

Quentin L. Cook, a member of the Quorum of the Twelve, briefly denounced racism during a speech on the importance of humility. Cook reminded members that the religion’s signature scripture, the Book of Mormon, declares that “we are all alike unto God,” and said anyone who claims superiority based on race, sex, language or economic class is morally wrong and doesn’t understand God’s purpose for his followers.

Cook’s message echoed a church statement delivered in August condemning white supremacist attitudes as “morally wrong and sinful” after a protest over a Confederate War monument in Charlottesville, Virginia, descended into deadly violence.

The religion still deals with questions about their views on race, in part because the faith banned men of African descent from the lay clergy until 1978. The church now disavows the theories of the past that black skin is a sign of divine disfavor or curse, which led to the ban.

Mormon leaders also cautioned about the pitfalls of social media, where the carefully crafted images of an altered reality lead people to end up envious and discouraged and in constant search of more followers and likes.

Jeffrey R. Holland, a member the Quorum of the Twelve Apostles, warned members not to let the pursuit of Christ-like perfection lead to ulcers, bulimia, depression or lowered self-esteem.