SUTHERLAND SPRINGS, Texas (RNS) — After a day’s work, Jennifer Garcia drove over from San Antonio and propped a homemade poster drawn by her and her 6-year-old son at an intersection near the First Baptist Church of Sutherland Springs.

“Love conquers hate,” it said in a flag-themed red, white and blue drawing with stars and hearts, joining the heaps of flowers and teddy bears constituting a makeshift shrine near the church where a mass shooter killed 26 people at Sunday services.

Wiping away tears, Garcia said she felt compelled to drive 30 miles with her husband and two sons and join the hundreds who came to stand beside the people of Sutherland Springs. Later, church groups hosted an impromptu churchlike outdoor vigil.

“I was crying all day yesterday and I thought, ‘We have to come down,’” she said.

On top of hordes of journalists, the well-wishers nearly choked the town with cars and dust. That didn’t appear to faze the townspeople, though some grumbling was heard about the onslaught of media teams in this tiny unincorporated community.

Sunday’s shooting rampage — the worst in Texas history — claimed about 4 percent of the town’s approximately 600 residents. 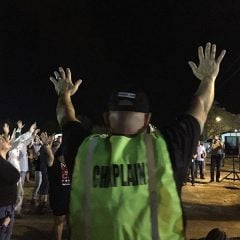 Lee Thompson, a chaplain with the [email protected] organization, at a vigil in Sutherland Springs, Texas. RNS photo by Yonat Shimron 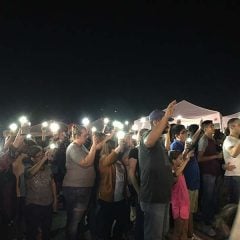 At a vigil Nov. 6, 2017, in Sutherland Springs, Texas, participants waved their cellphones with the flashlight apps turned on. RNS photo by Yonat Shimron 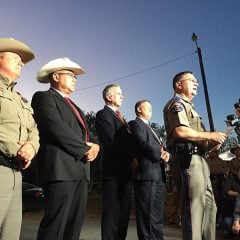 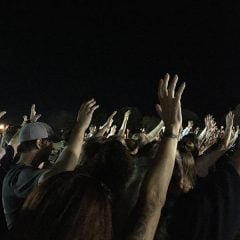 It also galvanized faith-based charities, from the Salvation Army to the Billy Graham Evangelistic Association, to shower the town with prayers.

At a news conference beside the town’s only blinking red light, Freeman Martin, regional director of the Texas Department of Public Safety, said a domestic dispute likely led shooter Devin Patrick Kelley to empty 15 magazines from a military-style rifle, first outside and then inside the church.

Kelley may have been hoping to target his mother-in-law, a church worshipper, though she was not there Sunday. After bystanders shot Kelley in the leg and torso he took off on a high-speed chase and later crashed his vehicle. Martin said the third and fatal bullet, to Kelley’s head, appeared self-inflicted.

Less than 24 hours later, 26 metal crosses shaped like clover leaves and attached to thin wooden dowels were dug into a hayfield.

Monday night’s vigil included a charismatic-style service, with a band from San Antonio and a procession of Christian ministers offering words of hope and consolation.

“Sutherland Springs, you are not alone and you are not forgotten,” said Mike Gonzales, one of half a dozen preachers at the vigil. “Our nation has gathered to be with you — for as long as it takes.”

A handful of rapid-response chaplains trained by the Billy Graham Evangelistic Association prayed with groups of people. American Red Cross workers handed out water, and square take-out containers with rice, beans, chicken and cornbread from a mobile unit.

While the vigil was clearly a Christian gathering, not only Christians attended. A group of some 20 Muslims — many from the Muslim Children Education and Civic Center in San Antonio — drove into town to stand with the bereaved.

“We just felt we had to do something,” said Omar Husain, the group’s religious director.

Many of those gathered waved their arms in the air as a band from San Antonio called the Sold-Out Believers Christian Fellowship played.

At one point the band urged those clustered around the gravel road near a baseball field to turn on their mobile flashlight apps and wave them, creating a candlelike concert effect.

Michael Mendoza, who has lived in Sutherland Springs for 25 years, said he simply came to connect with his grieving townspeople.