(RNS) — Twenty-three years ago my Uncle Jeff rediscovered the recipe for my great-grandmother Rose’s latkes. Rose Weiss (or Grammommy, as my father and uncle called her) made latkes that were different from the traditional deep-fried potato pancakes served during Hanukkah. Hers were sweet, pan-fried, dredged in sugar and served on wax paper at room temperature.

They were the only type of latke that my Uncle Jeff liked. When Grammommy passed away, the latke recipe died with her. Or so my family thought.

It turns out that recipes — particularly those safeguarded by Jewish grandmothers — are rarely without duplicates.

About a decade after Grammommy’s passing, Uncle Jeff unearthed a latke recipe that was identical to the sugary potato pancakes he enjoyed as a child. After years of looking, where did Uncle Jeff finally unearth the latke recipe of his youth?

On a “Jewish food enthusiasts” message board, of course.

Uncle Jeff wrote an article about using the internet to bring an old family recipe back to life. In the last paragraph, he mentioned me, writing:

“Years from now, when my new niece, Lindsey Rose Weiss (named in part after my grandmother), takes her sweet Hanukkah latkes as much for granted as whatever computer interface she’ll have, she won’t marvel at the electronic network that links the two. But I will.”

This is a rare occasion in which Uncle Jeff was wrong.

Jeffrey Weiss, photographed at his home in Dallas on Dec. 27, 2016. In the background is his father’s typewriter. (Louis DeLuca/The Dallas Morning News)

Shortly before Hanukkah last year, Uncle Jeff was diagnosed with glioblastoma. In layman’s terms, it’s an aggressive form of brain cancer. In my uncle’s terms, it was “a tumor in (his) head the size of a friggin’ egg.” Egghead puns aside — the life expectancy for this type of cancer averages between 12 and 16 months.

His diagnosis meant that it was time to start passing down family recipes.

First on the list? Grammommy’s latkes. At the time, Uncle Jeff’s cancer treatments were making him quite ill, and we both agreed that an in-person learning session was unrealistic. Instead, he would email me the recipe so I could make it at home and deliver the finished product to him the following day.

“Facebook message me if you have any questions,” he said. (It is worth noting that even postmortem, Uncle Jeff is more popular on social media than I will ever be.)

My questions began as soon as I started grating the potatoes and only grew more numerous when the first batch of latkes turned out mushy and burnt.

I required guidance beyond anything a Facebook message could provide. So I turned on FaceTime, and instantly, Uncle Jeff was with me in my kitchen.

And boy was he bossy.

I pointed my phone’s camera toward the bowl containing my latke mixture.

“Pulse the batter a little more in the food processor,” he instructed.

Uncle Jeff watched from his seat atop my kitchen counter as I spooned the batter into the frying pan.

“Keep the latkes on the griddle a bit longer. You need to wait until there’s a dark ring around the pancake. … That one on the left looks done. Flip it now or else it will burn!”

The result? My uncle and I replicated Grammommy’s latkes, right down to the sugar-coated, wax paper presentation.

“They’re perfect,” Uncle Jeff said the next day, as we sat in his house enjoying our culinary masterpiece. “Freakin’ perfect.”

My Uncle Jeff died in October. He won’t be at Hanukkah this year to make Grammommy’s sugar latkes, or regale the family with his tale about rediscovering the long-lost recipe at the dawn of the internet.

I am not usually one to ponder how technology helps preserve my Jewish roots. But last year, as I listened to my uncle use FaceTime to pass down a recipe from the Old Country — a recipe that he only found thanks to an online message board — I started to think the wonder of modern technology is another miracle we should be celebrating during Hanukkah.

And this December, as I looked through my emails from Uncle Jeff to find the one containing the recipe for Grammommy Rose’s latkes, I said a prayer of thanksgiving. How fortunate am I that the internet gives me a connection to my history, my namesake, my ancestors and my Uncle Jeff?

It is true that I don’t often marvel at the “whatever computer interface” I have in the same fashion that my uncle did 23 years ago. But I will always marvel at its ability to pass down tradition “l’dor vador” — from generation to generation.

One day, I will tell this story to my children over a heaping batch of Grammommy Rose’s latkes. By then, they will not likely marvel at FaceTime, or online message boards. But the fact that they’ll know their heritage, and their great-uncle, through these mediums? That’s l’dor vador — a miracle of modern technology.

(Lindsey Rose Weiss works in foreign and defense policy in Washington, D.C. She is the niece of the late Jeffrey Weiss, who chronicled his spiritual journey with brain cancer in his RNS column, My Way to the Egress. The views expressed in this opinion piece do not necessarily reflect those of Religion News Service.) 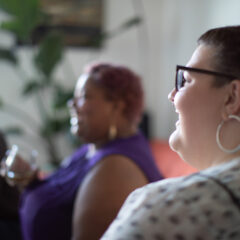 Martini Judaism
‘To those who celebrate.’ What’s up with that?
Follow us on Facebook!
Submit your photos to RNS